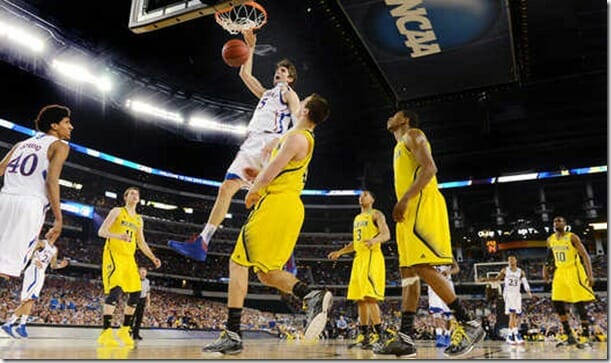 Michigan’s Sweet Sixteen victory over Kansas on Friday was arguably the program’s biggest win in over nearly two decades, but more than that, it was an instant NCAA tournament classic. The story of a game so extraordinary it deserves retelling by the participants themselves. Following is an oral history of Michigan’s 87-85 win over Kansas, featuring Michigan players and coaches addressing key storylines and key moments in this year’s most thrilling NCAA tournament game to date.

Thursday night before the game, Glenn Robinson III and Mitch McGary were in their hotel room. Both had read some of the articles coming out of both teams’ media availability that day. Jeff Withey, Kansas’s All-American senior center, had told reporters he thought he could dominate Michigan in the paint. He said McGary didn’t look that tall.

Glenn Robinson III: “We’re roommates in the hotel, it was right before we went to sleep.

“He goes, ‘[Withey] said “I don’t think anything about his height and I expect to dominate him.”’

Mitch McGary: “It’s the NCAA tournament. I’m not going to back down against anybody. People were saying he’s an All-American. He’s another player. He plays the same game as me. I’m just going to try to find his weaknesses. He thought he had a great match-up with me.”

John Beilein: “I know that with Withey, that was a personal challenge for him.”

The game tipped off at around 6:45 p.m. local time. Not long after the ball was tipped, Mitch McGary fell to his knees like he’s been shot. Replays showed Kansas senior guard Elijah Johnson intentionally smacking McGary below the belt.

McGary: “He just hit me. I mean, it was blatant. He might have been talking smack after it. The ref’s like, ‘He was just cutting to get open.’ I was like, ‘You go check the film, see what happened.’ Sure enough, they did, and they called a tech.”

After McGary missed both free throws, Kansas immediately put pressure on Michigan defensively, going right at the teeth of the Wolverine defense. The Jayhawks jumped out to an early lead.

Beilein: “It was really warm in the building, to me it felt like.  And I watched both teams.  There was times when we were moving, just getting up and down the floor, it just seemed like it was warm in there and humid.”

Tim Hardaway Jr.: “I really felt like we were just trying to catch our wind. They were getting out and going like they played there before, and they have. They’re used to this type of environment and we’ve got five freshmen who are just starting.”

Robinson: “We were struggling in the first half, scoring. We weren’t knocking down that many threes.”

McGary: “For me, actually, I was helping off Withey a little bit and going for blocks that I couldn’t get.”

Beilein: “Our angles are still a thing we just gotta continue to learn. We played some really bad angles in the first half, and they got points. They had a couple breaks but at the same time, we have to get better there. … We don’t have the defense yet.”

At halftime, Kansas held a mere six-point lead despite making over 70 percent of its shot attempts. The Jayhawks were getting anything they wanted in the paint, but Michigan was keeping up offensively.

Beilein: “The six points was actually comforting to us based on what we had done defensively.  They’re a good defensive team and we shoot 49 percent.  We’re learning to play better defense and they scored like crazy on us.

“Their length and quickness got us early.  And Withey’s length, he made some good plays.  On the other hand, they had some plays that bounced their way in the first half.  So I felt good about just being down six.”

Robinson: “We just thought, we haven’t played out best basketball, we’re not hitting shots we normally hit, and we’re down six. We believed we could just pick into that lead, and as long as we got stops – it all starts on the defensive end.

“(McGary) was probably the reason we were only down six coming into halftime.”

Trey Burke: “In the first half they did a good job of keeping me out the lane. In the second half I had a more determined mindset to get into the paint. Make Withey play me more, so I could drop it off to Mitch.”

In the second half, Michigan started well, with a 10-4 run to cut the Kansas lead to just two. But the Jayhawks came storming back, stretching their lead to 14 with just under seven minutes left to play.

McGary: “During a couple of TV timeouts with 7:38 to go, I think it was, we kept telling ourselves that we still had that extra push, we still had some legs, we had guys on the bench who were going to come off and give us good minutes.”

Robinson: “The biggest thing (Burke) said that I took in was, ‘Believe.’ Just that. ‘We’re not losing this game. We’re going to come back and win this. We can’t go home without a victory.’ I believed him.”

Hardaway: “We definitely didn’t see fear.  Everybody knew that the game wasn’t over.  We’ve been in this situation before, earlier in the year.  We just had to go out there and gut it out.  And I think our freshmen, our upperclassmen did a great job of keeping everybody calm, cool and collected.”

Nik Stauskas: “I think it was three minutes left and we were down by 11. We just got in the huddle and said, ‘Guys, we can’t give up. We’re not going out like this.’”

Beilein: “We knew, obviously with the help of the three ball, if we hit a couple shots, we could get back in the game. We stayed in it. There was a time when they had some separation opportunities and they couldn’t get it from us. We came charging back when they got it to 14. We hung around just enough to make enough plays.”

Despite hanging around for most of the game, when Jeff Withey slammed home a dunk to stretch Kansas’s lead to 10 points with just under three minutes left, it looked over for Michigan. But just when it seemed hopeless, the Wolverines started clawing back.

Stauskas: “I think we were doing a great job of defending them. I don’t think Kansas was necessarily breaking down at all, I think we just turned up the intensity level on defense.”

Beilein: “We knew we were going to need the three ball when we got down late. That was important. … I said, ‘Guys, we’ve gotta shoot some threes now. When you’re open, you’ve got to knock it down.’”

Robinson: “Defense. We got a couple steals, a couple easy buckets. We had to rebound, keep them off the glass. I think we did that, and then we just started attacking the rim.”

Burke: “It was never a point in time when we thought we were losing. You’re down 10 with two minutes left, it’s in the back of your mind, but we never gave up. I kept telling them, they’re going to break. As long as we continue to get stops, turn our defense into offense, get out in transition, we had a chance.”

Finally, it came down to one final possession for Michigan. The Wolverines were down by three when Elijah Johnson missed the front end of a one-and-one with 13 seconds left.

Stauskas: “At the end of the game our strategy was just kind of to let Trey Burke do his thing. I was sitting in the corner and I was enjoying watching it.”

Burke: “Well, when Elijah Johnson missed ‑‑ missed the front end of one‑and‑one or he missed the second shot of the one‑and‑one, I knew we still had a chance.  There was only about ten seconds left. Coach called a play for me, but it was really to try to get into the paint and get a quick layup.  And I saw that they were going to switch.  And it was about six seconds left.  I pretty much knew we didn’t have a lot of time to get a two and then a foul, just go through that.”

McGary: “I actually set a screen and I was on my back. I just turned to see the ball in the air, and I just ran to try to get an offensive rebound if I could.”

Burke: “(Kevin Young) was on me, and he’s a really long guy. I tried to separate him from me by stepping back and getting a lot of arch on my shot. I practice that shot a lot –the step-back shot, you guys see that a lot.”

Bartelstein: “That’s an iconic moment. Michigan fans will never forget that shot. He’s had so many game winning shots just roll out and we always tell him ‘your making the next one’. Me, Matt and Blake were talking before he even took the shot saying ‘he’s making this one, he’s just due to make it.'”

Stauskas: “He pulled up really deep. I wasn’t expecting him to shoot from that far, but just the trajectory of the ball, it looked good from the time he released it. He was a good seven, eight feet out from the 3-point line.”

Burke: “I stepped back, got some separation and hit the shot.”

Burke: “The moment it left my hand, I knew it was good.”