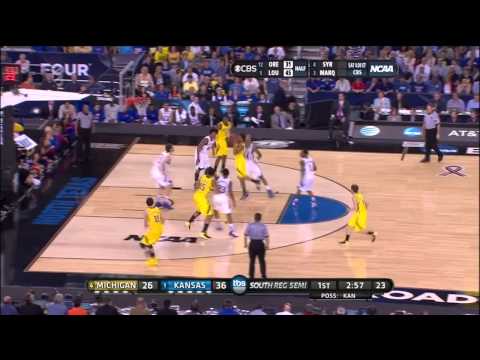 We have to kick things off a bit late in Michigan’s 87-85 win over Kansas in this edition of Five Key Plays, for obvious reasons. For most of the first half, Michigan’s defense was patently non-existent: Kansas scored 34 of its 40 first-half points in the paint and got to the rim at will. While Michigan’s defense wasn’t putting up much of a fight, its offense was. The Wolverines hung around thanks to timely baskets whenever it felt like Kansas was pulling away, and at no point in the first half was that more important than when Michigan scored 11 points in the final three and a half minutes before the break. It started with a 3-pointer from Spike Albrecht, for whom big-time threes are becoming a habit. Nik Stauskas does a great job of drawing the defense’s attention off the screen from Jon Horford — even Albrecht’s defender, Naadir Tharpe, looks toward the paint and loses track of the freshman guard. Stauskas fires a cross-court pass and Albrecht nails the open 3-pointer. After Glenn Robinson III gets a tough rebound in traffic and the put-back off a Stauskas missed three attempt, Trey Burke and Mitch McGary link up for a huge basket. Burke gets between his man and the basket, completely taking his defender out of the play. Jeff Withey steps up to challenge, Burke gets the ball to McGary on the baseline. The freshman big fires, hits and gets fouled in the process. Kansas apparently never heard that classic adage, “never foul a jump-shooter,” because they Jayhawks do the exact same thing on the next play, fouling Nik Stauskas as he nails a 3-pointer in the corner. By the time the dust settled at the end of the first half, Michigan, somewhat miraculously, found itself down only six points and very much in a game it didn’t really deserve to be in.

Michigan’s offense looked sharp coming out of the break, but its defense remained anemic. The Wolverines scored nine points in the half’s first four minutes and cut the Kansas lead to just two. It looked like this was going to be a game. Then, Kansas asserted itself on the offensive end, going on a 10-2 run to stretch the lead to nine, which would later turn into 14. The first two Kansas makes in this sequence were due to defensive lapses, but the other two were results of fast break opportunities for the Jayhawks. On the first play, Nik Stauskas simply gets beat on the perimeter by Travis Releford. There was little Jordan Morgan could have done to help out in the post — if he leaves Withey, Releford likely dumps it off, and there wasn’t enough time to get set for a charge — and the senior glides in for a layup. On the next play, Spike Albrecht finds himself on All-American Ben McLemore, a bit of a mismatch. Albrecht badly misreads a screen set for McLemore, anticipating the wing to use it to dribble right. Instead, McLemore pops to the 3-point line and nails the open shot. Trey Burke drives on Michigan’s ensuing possession but gets stripped, leading to a run-out dunk by McLemore. After a missed shot by McGary leads to another run-out, Kansas has taken control of the game.

After Kansas pushed its lead to 14 with just under seven minutes to play, Michigan still refused to go away. The Wolverines kept chipping away at the lead, and around the three-minute mark, the floodgates finally opened. Depending on your perspective, Michigan’s rapid-fire comeback in the game’s closing minutes could be described as a brilliant effort by the Wolverines or an epic collapse by the Jayhawks. In truth, it was a little bit of both. The first play of the sequence was simply an excellent individual effort by McGary — first, the freshman forces the steal at the defensive end, then after Kansas stops Nik Stauskas driving to the basket McGary grabs the offensive rebounds and puts it back with his off hand over Jeff Withey. After Elijah Johnson makes an ill-advised pass to Withey at the top of the key, Glenn Robinson III steals it and flies in for the dunk. Trey Burke makes an incredible play on Michigan’s ensuing offensive possession, crossing up Johnson and forcing Withey to help off McGary. Burke somehow gets the ball to McGary under the basket and the big man lays it in. Burke hits a 3-pointer — which could only be topped by the one he would hit about one minute later — with Withey in his grill. After a scrum under the basket results in a Robinson put-back, Michigan has cut the deficit to just three points.
4) The Shot

There isn’t much to say about this shot that hasn’t been said already. Elijah Johnson kept the door open for Michigan by missing the front end of the one-and-one. Tim Hardaway Jr. grabbed the rebound and got the ball to Burke. Burke said after the game that the plan had been for him to get a quick two, but the point guard quickly realized there was not enough time for that. Burke dribbled left around a drag screen by Mitch McGary that took out both him and Elijah Johnson. Then, the All-American pulled up from 28 feet out and hit one of the biggest shots in Michigan basketball history.

It’s hard to imagine a team looking for confident than Michigan walking onto the floor to begin the overtime period. After Trey Burke hit the 3-pointer to force overtime, each team found itself on opposite ends of the emotional spectrum. Burke was riding his hot streak, having scored 10 points in the game’s final six and a half minutes. Burke hit another deep three to kick off the period, followed by him demanding a clear-out so he could take on Ben McLemore one-on-one. Burke creates the tiniest bit of separation with a lethal hesitation move and nails a long two over the freshman’s outstretched hands. But it was a team effort in overtime for Michigan, with Mitch McGary and Glenn Robinson III each contributing big points to close it out. If it’s possible that there was a player on the floor that matched Burke’s confidence, it was McGary. The freshman big received a pass in the post and without hesitation put up a turnaround jumper with Jeff Withey’s hand in his face — and drilled it. After a McGary put-back, Michigan was up by three and in control. Once again, Robinson was Johnny on the spot defensively, sticking his long arm in the passing lane to force a steal and run-out. In a situation eerily reminiscent of Michigan’s final regular-season game against Indiana, Robinson was fouled and went to the line with a chance to potentially seal the game. Against Indiana, Robinson missed the front end of a one-and-one. On Friday, he nailed both shots to put Michigan up five.

This was a vexing play by Elijah Johnson. Kansas’s senior guard appeared to be out of sorts all game, and nowhere was this more evident than in his decision-making over the course of this final play. Johnson got around both Trey Burke and Jordan Morgan, both of whom had clearly been instructed to avoid fouling at all costs, and wound up with what looked like an open lane to the basket. But the point guard appeared not to look for the shot and instead threw a pass out to Naadir Tharpe, who was 25 feet away from the basket. Tharpe put up a wild shot, and Michigan was on its way to its first Elite Eight since 1994.