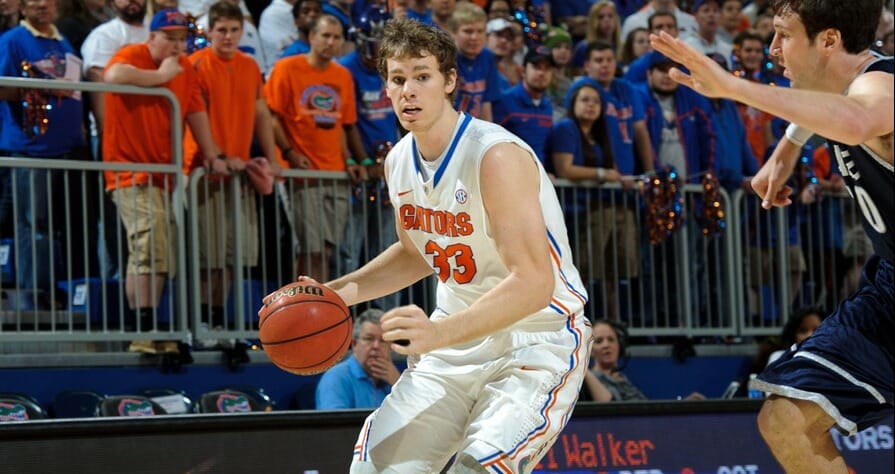 After 36 games scattered with highs and lows, Michigan is just 40 minutes away from a Final Four. A trip to Atlanta has been near the top of the Wolverines’ list of goals since April when Trey Burke announced he was returning to school. Now Michigan is one of the last eight teams standing and has the opportunity to punch its ticket.

Once again the Wolverines, the youngest team in the NCAA tournament will have a decided disadvantage in the experience column. Florida starts three seniors and two juniors all of whom have played at least 12 games in the NCAA tournament. The Gators have come painfully close to the Final Four in each of the last two seasons, losing Elite Eight games to Butler and Louisville by a combined seven points.

“At this point in the season we really don’t consider ourself freshman,” Stauskas remarked on the podium Saturday afternoon. “We’re 35 games into the season, so we’ve seen just about everything through the course of the Big Ten season. We’ve been going up against good teams.”

The 6-foot-6 guard has a point. Michigan didn’t look young when it took every punch that Kansas could deliver and bounced back for a heroic comeback victory. The Wolverines will almost assuredly need a more consistent effort on Sunday to play on but at this point it’s clear that they’ve grown up.

Offensively, Florida is decidedly perimeter oriented. The Gators attempted 41% of their field goals from three point range in SEC play and led the league in all shooting metrics: 55% on twos, 39% on threes for a 56.7 effective field goal percentage. The Gators turned the ball over on just 17.1% of their SEC possessions, 2nd best in the conference, and follow the stereotypes of a perimeter-oriented team. What Florida doesn’t do well: crash the offensive glass or get to the free throw line. The Gators rebounded 30% of their misses in league play (10th SEC) and attempted just 24 free throws per 100 field goal attempts (14th SEC).

Florida’s offense is remarkably similar from a four factors perspective to Michigan’s; the Gators just play a little slower and shoot a few more threes.

The similarities don’t stop with the four factors, Florida is one of the few transition offenses in the country more efficient than Michigan. According to data from Synergy Sports, Sunday’s game will feature two of the five most efficient high major transition offenses.

There are still some differences between both teams. Florida has more spot-up jumpers and significantly more post-up opportunities baked into its offense while Michigan gets out in transition more often and runs more ball screens.

While both offenses have similarities, Florida’s defense has been dominant at times – something nobody would say about Michigan. Florida’s defense is ranked second nationally in adjusted defensive efficiency and the Gators rank 55th or better in all four factors. Florida’s field goal defense jumps off the chart: 43% effective (5th), 42% 2-point and 30.3% 3-point (28th) field goal percentages allowed. The Gator interior defense isn’t Kansas, but it’s the next best eFG% in the field of 68. Florida forces turnovers on nearly 23% of its opponents possessions and the Gators are just 9-6 when their opponents give the ball away on less than 21% of their possessions; 20-1 otherwise.

Florida’s three starting guards – Kenny Boynton, Mike Rosario and Scottie Wilbekin – have attempted 51% of their field goals from three point range this season. Rosario is the best perimeter shooter of the bunch, 38% for the year and 10-of-19 in the NCAA tournament. Florida’s guards range from 6-foot-2 to 6-foot-3 and between 176 to 190 pounds. They are quick but not big and Michigan should have a size advantage at the two and three spots.

Wilbekin is considered the Gators’ defensive stopper and is likely to draw the Burke matchup while Boynton is the best ball screen player on the Florida roster.

Erik Murphy is a classic stretch-four and easily the Gators’ most efficient offensive player. Murphy shoots 63% on twos and 46% on threes with slightly more than half of his attempts originating from long range. One third of Murphy’s offensive possessions are spot ups, 19% are post ups and 12% are rolling to the basket on the pick and roll. The 6-foot-10 forward ranks in the 85th percentile are better in finishing all three play types and should be a load for Glenn Robinson III to handle at the four.

Patric Young anchors the low post at 6-foot-9, 249 pounds. Young makes 60% of his field goal attempts, all twos, but is just a 50% free throw shooter. He’s a good defensive rebounder and a great offensive rebounder and shot blocker. An impressive 48% of Young’s offensive possessions are traditional post ups and he scores .902 points per post up, good for the 74th percentile nationally. He prefers to be on the left block and turn his left shoulder; his favorite move on the low block is the left shoulder hook.

Billy Donovan generally sticks with an eight man rotation, relying on Michael Frazier II, Will Yeguete and Casey Prather to provide his bench minutes.  Yeguete, at 6-foot-7, 240 pounds, provides the majority of Florida’s backup minutes in the low post. He’s an impact rebounder on both ends of the floor and comfortable finishing at the rim. Yeguete is also a key for the Gators defense, John Gasaway points out his impact:

In calendar 2013, no UF opponent has scored more than a point per trip when Will Yeguete has been healthy and available all game. Call that Yeguete’s Law, and it is in force until proven otherwise.

Prather is a name familiar to Michigan fans as John Beilein pursued him heavily as a prep player. Prather is rarely involved offensively for the Gators but is a capable finisher cutting to the basket, in transition and on the offensive glass. Frazier is a freshman guard that has attempted 80 percent of his field goals from 3-point range and converts at a 46% clip.

Michigan’s offense is scoring an impressive 1.17 points per trip in NCAA tournament play and its offense is certainly hitting on all cylinders considering two thirds of that production came against Kansas’ formidable defense and VCU’s vaunted Havoc full court press. Florida’s defense is impressive in its own right but the Wolverines should thrive against a defense that hopes to them over – as we saw last week at the Palace. The key will continue to be whether Michigan can slow Florida’s offense.

The matchup at the four position is most worrisome for Michigan. Murphy is Florida’s most efficient player and also in the most difficult spot for Michigan to counter. Robinson should be able to stick with Murphy on the perimeter but his challenge will be defending Murphy on the block, where Murphy is capable and Robinson has struggled against bigger players. Robinson has had a good tournament but will need one more big game – on both ends – to help Michigan to a Final Four.

Trey Burke and Mitch McGary have attempted 84 of Michigan’s 186 (45%) shots in the NCAA tournament and there’s no reason to change that. The ball screen will be critical, as it is in every game Michigan plays, and open up the rest of the offense. The Gators utilized a hard hedge against Brett Comer and Florida Gulf Coast on Friday.

“They did a great job on not making me use the ball screen. They made me turn it down,” Comer said after FGCU’s loss. “They hedged it really hard. I didn’t make the right play out of it, like I should have, and it affected us.”

Michigan has utilized the ball screen so often this season that the Wolverines have seen almost every variation of ball screen defense and the key will be how Michigan adjusts to Florida’s approach throughout the game.

Ken Pomeroy’s computers love Florida, ranking the Gators first overall, so it’s no surprise that Pomeroy’s model projects a 67-62 Florida win on a neutral court, giving the Gators a 71% shot at advancing to the Final Four. By the end of March the numbers, probabilities and even logic only mean so much; this looks to be another game that will be decided by just one or two possessions down the stretch.