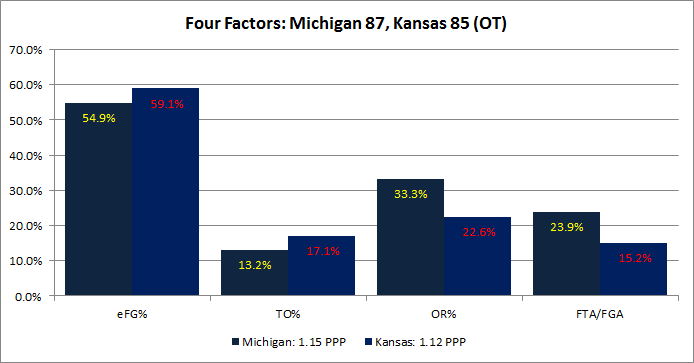 Trey Burke finally has his moment.

This wasn’t the first time Michigan’s point guard put the team on his back but he’s never managed anything quite like this. Not in March, not in the NCAA tournament and certainly not in front of 40,639 fans at Cowboys Stadium.

If Burke’s career had ended against Kansas it would still be regarded as a success. His trophy case would include a Big Ten Championship, Freshman of the Year, All-American and likely Player of the Year honors.

But Burke wasn’t finished, even when it appeared Michigan was.

Jeff Withey’s dunk with 2:52 to play looked to seal the deal. The Jayhawks were up 10 points with less than three minutes to go and appeared to be headed to the Elite Eight – again. How confident was I that Michigan’s season was coming to an end? I had already booked a different flight for Saturday morning.

Luckily the Wolverines had a bit more backbone. Michigan closed regulation on a 14-4 run over the final two minutes and a half minutes to force overtime. Burke scored 14 of Michigan’s final 25 points including the 30-foot three that sent the game to overtime.

This was Burke’s moment but the win was about Michigan, a team that’s battled through dramatic highs and lows all season and wasn’t ready to quit.

“It’s a bunch of young men that have high character, they play to win.  They play together,” John Beilein explained. “And they’ve been persistent all year long at trying to do their best, without any types of ups and downs getting in the way.”

Almost every one of Burke’s teammates played a role in the comeback. Tim Hardaway Jr. rebounded the free throw that led to Burke’s shot. Jordan Morgan, all but forgotten at the end of the bench in recent weeks, dug out a loose ball that led to a Glenn Robinson III layup. Robinson also added the clinching free throws down the stretch. Nik Stauskas chipped in an assist while Mitch McGary dominated the paint and scored six points in the final seven minutes of play.

There’s no stat to point to which explains how Michigan won this game. Kansas dominated for 37 minutes but the Wolverines simply had No. 3 on their roster. Michigan rebounded a higher percentage of its missed shots but Kansas actually outscored the Wolverines 16-12 in second chance points. Michigan got to the line more often but converted just 9-of-17 free throws. The Wolverines won the turnover battle but the Jayhawks actually turned the ball over less often than they have on average this season.

Michigan held a pair of one-point leads in the opening minutes but, for all intents and purposes, Kansas led by an arm’s length throughout. Michigan deserves credit for hitting just enough timely shots to keep within striking distance but the Jayhawks controlled play. But Trey Burke’s 30-footer with four seconds left finished the rope-a-dope strategy and the Wolverines were able to seal the deal in overtime.

How dire were Michigan’s odds? The Wolverines’ win probability bottomed at .6% with 2:33 to play.

Michigan scored 1.15 points per possession against the Jayhawks, the fourth best offensive performance Kansas has allowed this season. Even more impressive is Michigan’s 1.26 points per trip in the game’s final 25 minutes. The Wolverine defense hovered between below-average and awful throughout the game but the offense just kept scoring. Michigan’s offense improved as the initial shock factor of Jeff Withey wore off. The Wolverines shot just 47% on two point attempts in the first half compared to 63% in the second half and overtime.

Michigan’s defense was never very good but eventually Kansas missed a few shots. Allowing 1.12 points per game in the NCAA tournament will usually get you beat but Michigan deserves some credit for cleaning up the few Kansas misses that did come about. Mitch McGary and Tim Hardaway Jr. were Michigan’s most effective defensive rebounders and helped the Wolverines grab over 77% of Kansas’ misses. Michigan was unable to force many turnovers despite the Jayhawks sloppy nature but did prevent free throw attempts for the most part.

Next up for Michigan is a date with Florida on Sunday afternoon. The Gators have cruised to the Elite Eight with wins over Northwestern State, Minnesota and Florida Gulf Coast and sit at the top of Ken Pomeroy’s rankings. The matchup can wait, Michigan is 40 minutes away from the Final Four.