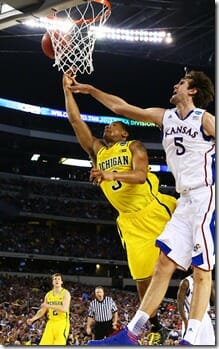 While the fans were allowed to take a day to revel, the Michigan team certainly wasn’t.

With a quick turnaround to their Elite Eight game on Sunday afternoon against Florida, the challenge for the Wolverines was forgetting a night so unforgettable. When asked about his 3-pointer that sent the game to overtime on Friday, Trey Burke said some perfunctory words about how far away it was, but quickly focused on the future.

“But that’s in the past and we’ve got to get ready for Florida tomorrow.”

Forgetting about Friday’s game is far from an easy task. Burke received over 200 text messages from friends and family and certainly saw his face plastered to the front page of sports pages and websites. On Saturday he was was bombarded by questions about ‘the shot’: How did it compare to Rumeal Robinson’s free throws? Did he see just how far away from the basket he was? Would his teammates frame the photo?

But Burke insisted that the Wolverines will treat this game like any other and do what they’ve done all season: move on to the next one.

“We just have to be ready for Florida and cannot worry about anything in the past.”

No doubt this is an attitude instilled in his players by John Beilein, who couldn’t dwell on a win if he tried to. Beilein was up at 5:45 on Saturday morning after not getting back to the team hotel until around midnight on Friday. What was he doing? Watching film of Florida.

It’s safe to say that as long as Beilein is the coach, his team will share in his aversion to satisfaction.

“We want to make sure that they never get satisfied by this great season that we have,” Beilein said. “We’re trying to get one more every game. And if one more leads us to one more, we’ll concentrate on that game. But we’ll be hungry.”

There was a lot of talk going into Michigan’s Sweet Sixteen match-up against Kansas about how the Wolverines were going to attack Kansas’s stellar defense. The Jayhawks ranked 5th in the country in adjusted defensive efficiency and held the best 2-point field goal defense in the nation.

As for Florida, the team Michigan will be playing Sunday in its Elite Eight game? The Gators are ranked 2nd in the country in defensive efficiency — three spots ahead of Kansas.

A big part of that defense is the ability of Florida’s guards to match up on the perimeter. Kenny Boynton and Scottie Wilbekin are both extremely hard to get by — especially Wilbekin, who is known as the team’s defensive stopper on the wing.

“(Wilbekin is) a really good defender,” Trey Burke said on Saturday. “Just from watching film and watching Florida this year, I understand that he’s kind of one of their best defenders. So just like against VCU, we’re going to have to try to find ways to attack their pressure and make their pressure our offense.”

Wilbekin was asked about the prospect of defend Michigan and wasn’t shy in his response.

“I would say that I like our chances,” Wilbekin replied.

On the inside, Michigan will be facing another tough post defender in junior Patric Young. Young is just outside the top-100 nationally in block percentage and will be the second top big man that Mitch McGary will face in three days.

Tim Hardaway Jr. was asked to compare Florida to a team Michigan has played this season.

“Ohio State, but without the shot-blockers,” Hardaway replied. “They are very talented and their guards can defend; their forwards are really solid; Patric Young is a good player down there in the post.”

John Beilein said this might be Billy Donovan’s best defensive team he’s had in his tenure at Florida.

“I think Billy would probably say this is the best defensive people he’s ever had. We’re having trouble finding spots that we can attack. It has to do a lot with the match‑ups, the makeup of the team, the experience of the team,” Beilein said. “But they’re going to be challenging. They’re not turning teams over a great deal. They’re just guarding their yard. They’re just staying in front of people and contesting and not getting a lot of second opportunities, as well.”

Earlier this season, Mitch McGary was overweight and out of shape. Sure, a lot of this was due to a nagging injury that the coaches didn’t want to put extra stress on. But his teammates thought it was more than that.

So they talked to him about it.

“Everybody on the team was like, ‘Hey, Mitch. You’re not playing the way that we think you should be playing,'” Tim Hardaway Jr. said on Saturday. “I think the coaching staff sat with him and something just clicked.

“It happens when your teammates show you up in practice, when they say, ‘Hey, you’re not going hard enough,’ or, ‘You’re being lazy.’ It really gets into your mind that, I need to step it up a notch. This is college basketball. I’m not in high school no more. He took that adversity and made it into a positive.”

McGary has delivered in a big way, obviously. His most recent response came in the form of abusing one of the nation’s top post defenders in Jeff Withey.

Now, Hardaway and his teammates have nothing but praise for the newest addition to Michigan’s starting lineup.

“He finishes. He just finishes. He has a nice little jump shot, a 12-to-15-footer, and he’s been working on that all season long,” Hardaway said. “He’s a guy who can set screens very well, like you saw in the VCU game. It’s been great to see him expand his game throughout the whole season.”