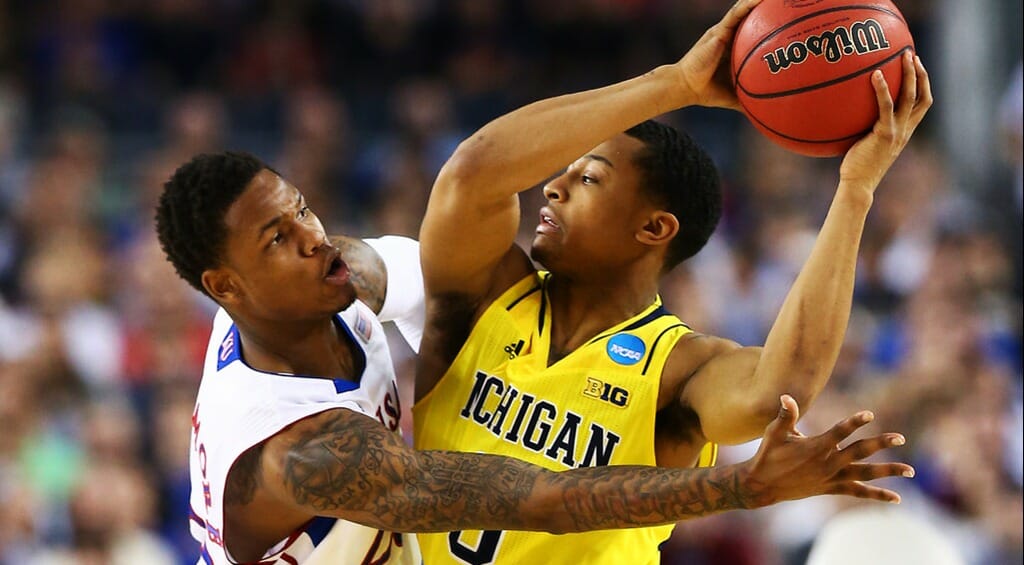 It’s obvious that Michigan, the team with the best adjusted offensive efficiency rating in the country, poses problems for any team defensively. Even a defensive juggernaut like Kansas couldn’t contain the Wolverines, who scored 1.14 points per possession against the Jayhawks.

But if there is a team with a defense even better prepared to match up with Michigan’s offense than Kansas, it’s Florida. The Gators hold the nation’s second-best adjusted defensive efficiency rating and will be looking to limit Michigan’s offensive explosiveness any way they can.

“Well, clearly from an offensive efficiency standpoint they may be the best in the country,” Gators head coach Billy Donovan said during a press conference on Saturday. “They’ve got a guy in the back‑court, (Trey) Burke, that is just terrific.  Great assist-to-turnover ratio, explosive scorer and certainly with him he has got a great ability to get everybody involved.  Whether it’s (Mitch) McGary up front, (Tim) Hardaway (Jr.), (Glenn) Robinson on the perimeter, and offensively to take over a game like he did in the second half with Kansas. This is a great challenge, maybe the best offensive team in the country.”

While Michigan’s supporting cast has been moving toward an ever-more starring role, the initial challenge remains to stop Burke. Florida clearly recognizes Michigan’s point guard as the player who makes it all go for the Wolverines.

“They’re very good in transition,” Rosario said. “Offensively they have a lot of guys in the back‑court that can score the ball, and they have one guy that can get in the paint and contribute the ball to everyone.  Trey Burke, he’s a very good point guard.”

Junior guard Scottie Wilbekin, recognized as Florida’s defensive stopper on the perimeter, was asked to compare Burke to another player the Gators have faced this season. He mentioned Phil Pressey, but mentioned it’s not a perfect comparison.

“I would say the closest player that we face to him is probably Phil Pressey, but I’d say he does a better job of scoring than Pressey,” Wilbekkin said. “He’s a great player and he does a great job of getting into the lane. Once he gets in there, he can either finish himself or find all the shooters they have or McGary inside.”

Donovan heaped even more praise on Burke, going as far as comparing him to Cleveland point guard Kyrie Irving.

“He’s really, really, to me, just watching him, not only is he playing the game, but he’s also measuring the game, how are you guarding, what’s open, what can he do,” Donovan explained. “When you’re dealing with him, in my opinion, it is a long process. You can do a great job on him for ten minutes, a great job on him for 25 minutes. He has got the ability just to explode at any point in time. … He’s got that kind of ability where if you rest a little bit or think that he’s not going to do something, that’s exactly when he creates great plays for himself or his team.”

Michigan’s offense, of course, relies on the high screen-and-roll and Burke penetrating based on the action that results from that. Teams have tried all sorts of methods to keep Burke out of the lane off of picks. Kansas had its big men, mainly Jeff Withey, stay at home and force Burke to go around him. Big Ten team’s like Ohio State have “locked the rails” and eliminated lanes for Burke going one direction.

Donovan recognizes that the pick-and-roll defense will have to be a team-wide effort — not just the job of someone like Wilbekin to take care of.

“If we don’t have enough help built in around Burke with him coming off screens, using screens, it makes it very, very difficult for any defensively player to handle a guy like that,” Donovan said. “So you know that Scottie is going to work hard on the ball.  He’s going to work hard on getting all the screens, but he’s also going to need help, too, inside of our team.  And we’ve got to make sure we give him that built‑in help tomorrow.”

That help means Florida’s talented big men, from senior Erik Murphy to junior Patric Young, will have to step up and help. However, that risks their assignments — players like Mitch McGary, Jordan Morgan and Jon Horford — being open for dump-offs.

Patric Young intimated that as long as Florida takes care of the pick-and-roll and cleans the glass, Michigan’s bigs, especially McGary, should have a quiet day.

“Well (McGary) is not really a dominant post scorer, he’s just a recipient of Trey Burke being able to split pick-and-rolls and finding him open,” Young said. “I’ll give him credit for what he does on the glass. You can’t fake 13, 14 rebounds a game. He does a great job of that, so I have to do a really great job of blocking him out and pursuing loose balls and rebounds. But if we do a great job in the pick-and-roll, I think it will limit their whole team.”