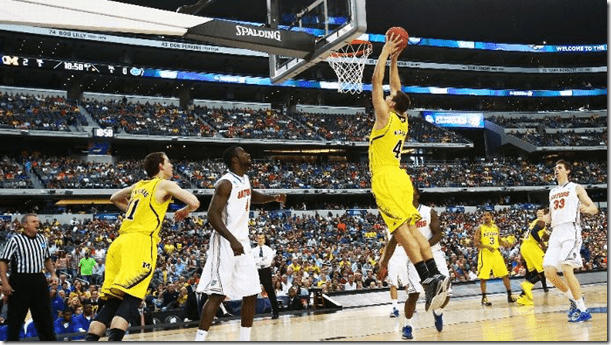 Sometimes everything just comes together when you least expect it.

Michigan’s season will continue as the Wolverines are headed to Atlanta for their first Final Four in 20 years.

It would have sounded in crazy in late February, on Selection Sunday or with three minutes to play on Friday evening but you have to give this Michigan team credit. They always believed.

There were many times that Michigan looked the part of a Final Four team. The Wolverines cruised through the non-conference season and beat plenty of really good teams this season, playing a handful of others to the wire. But it was impossible to shake the heartbreak in Madison, embarrassment in East Lansing or devastation in State College from any opinion of this Michigan team. The Wolverines fell from likely No. 1 seed to a forgotten No. 4 seed and a trip to the Final Four was the last thing on anyone’s mind outside of the Michigan locker room.

But the Wolverines never looked anymore like a Final Four team than they did on Sunday afternoon at Cowboys Stadium. Michigan outscored Florida 41-17 to start the game, playing its best half of basketball this season, and never looked back en route to a 20-point victory.

Michigan’s offensive numbers for the game are very good but they don’t do the Wolverines’ first half performance justice. Michigan scored 47 points on 36 first half possessions; a whopping 1.31 points per trip against the supposed second best defense in the country. It was an offensive clinic. Michigan had eight fast break points, eight second chance points, hit 7-of-11 threes and rebounded 39 percent of its misses. Just about everything that John Beilein drew up seemed to work including a masterful sideline out of bounds play in the closing seconds of the half. The Wolverine offense was so effective that the second half was a mere formality.

The three point shot catalyzed Michigan’s offense, Michigan shot just 43% inside the arc and 10-of-19 (53%) outside, put Michigan also feasted off of turnovers and fast break opportunities. The Wolverines outscored the Gators 16-7 in points off of turnovers and 21-4 in fast break points. From the opening tip off the game was played at a fast pace; something Michigan dictated.  This was as fast or faster as any game that either team played all season at 72 possessions and, including this result, Michigan is 7-2 in games played at 68 possessions or more while Florida is just 2-3.

The Wolverines also blanketed Florida defensively – in both halves. The Gators mustered just .82 points per possession for the game and never looked in sync. Michigan dominated the defensive glass, forced Gator turnovers and held Florida to 46% shooting inside the arc and 20% outside the arc for a 43% effective field goal percentage. The key for Michigan defensively was eliminating the three point shot; Florida only attempted 10 threes for the game and made just two of them. When the Gators did drive, Michigan was physical enough at the basket to contest regularly.

On this night, there was no competition. Michigan was the better team from the coach’s stool on the sideline to the last spot on the bench. From Trey Burke to Spike Albrecht, Michigan dominated the game and will head to Atlanta playing its best basketball of the season.

Michigan will play in the late game Saturday evening at the Final Four with tip off scheduled for 8:49 p.m. at the Georgia Dome (CBS). Syracuse has stifled its opponents throughout the tournament, surrendering just 183 points in 253 tournament possessions, or .73 points per trip.

But let this one sink in, Michigan is going to the Final Four.