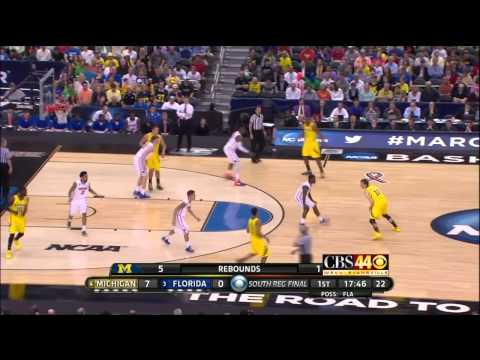 1) Michigan scores the first 13 points of the game

Okay Michigan fans — dig in. The first three minutes of Michigan’s 79-59 beat down of Florida on Sunday were a a joy to watch and featured Michigan at its best. The Wolverines were able to get whatever shot they wanted against Florida’s vaunted defense. As always, a large part of Michigan’s explosiveness was due to their ability to get out on the fast break. On the first play of this sequence, Glenn Robinson III plays good defense on Erik Murphy — a theme of this game — and forces him into a tough leaner. The ball caroms off the rim and into the hands of Tim Hardaway Jr., who makes an excellent pass to Mitch McGary. McGary lays it in with his off hand and Michigan is on its way. On the very next play, Murphy misses another hard two and Hardaway again leads the break. This time, he makes a very late pass to Nik Stauskas, but the freshman spins and leaves an excellent pass for McGary to finish with the slam. Easy buckets off good defense, both, but Michigan was getting great looks out of its half-court sets, as well. The next two plays feature perfectly-executed pick-and-rolls with the Gators playing right into Michigan’s hands. First, Trey Burke gets a drag screen from McGary. Patric Young helps on Burke, leaving Nik Stauskas’s defender Mik Rosario to help on McGary, which — you guessed it — leaves Stauskas wise open for his first three of the day (there would be more). On the next play, McGary is the one open on the screen-and-roll. By helping but not hedging on ball screens, Florida does exactly what Michigan is looking for in a defense. By the end of Michigan’s opening run, the Wolverines were up 13-0 and had scored 10 of their points within five feet of the basket.

2) Nik Stauskas hits five 3-pointers in the first half

During Michigan’s Elite Eight matchup with Florida on Sunday, the funniest thing happened: the Gators forgot about Nik Stauskas. I suppose Stauskas’s woeful long range shooting thus far in the NCAA tournament (2-for-12) makes it slightly understandable, but still. The freshman’s favorite spot is in the corner, and Michigan kept finding him amazingly open in just that spot. The first play featured some defensive confusion for Florida, as two players were guarding Jon Horford when Michigan arrived at its end of the court. By the time Stauskas caught the ball in the corner, Erik Murphy was sprinting over to cover — not the ideal close-out situation. On the next play, Florida is again caught with not enough defenders on one side of the court. Burke, Tim Hardaway Jr., and Stauskas have only Casey Prather and Kenny Boynton guarding the thre of them. Burke’s pass to Hardaway causes Prather to move up, leaving Stauskas again open for three in the corner. Boynton is telling Prather not to leave Stauskas, and even though it’s a pick-your-poison situation for Prather he’s probably right. After benefiting from a lucky bounce on the next play, Stauskas benefits from a Burke drive to his side. Stauskas isn’t even open on this play — Rosario makes a decent close-out — but the young Canuck buries the shot anyway. That last 3-pointer by Stauskas put Michigan up by an astounding 24 points and left him tied with Florida at 17 points a piece.

After Michigan got out to its huge early lead, there was some slippage near the end of the first half. The Gators were doing what the Wolverines did earlier in the game — they forced turnovers and missed shots, cleaned the glass, and penetrated the interior of the defense. In doing so, they fought their way back into the game. After Casey Prather forces a bad shot in the first play, Will Yeguete sneaks behind Nik Stauskas for the offensive rebound and put-back. The next play is one of the few offensive bright spots for the Gators, as Mike Rosario makes an excellent pass to Prather off the screen-and-roll action for a lay-in. After a bad turnover by Stauskas on the ensuing Michigan offensive possession, some defensive confusion on the part of the Wolverines leads to a wide-open 3-pointer by Kenny Boynton. By the end of the run, Michigan’s lead was down to 15. That sounds like a lot, but given the way Michigan had been playing, it had the feeling of being way to slim.

Despite fouling Stauskas on a 3-point attempt as time expired at the end of the first half – after a phenomenal sideline out of bounds set – Florida went into halftime with momentum. The Gators had played terribly, but a 15-point halftime deficit? Teams have come back from worse. Florida continued to play well in the first few minutes of the second frame, forcing two turnovers and two missed 3-pointers by Michigan and cut the Wolverines’ lead to just 11. At that point in the game, Nik Stauskas had already hit a few 3-pointers, but the one he hit at the 16-minute mark was by far the biggest. Burke actually winds up with the wide-open three on this play but misses it. After Glenn Robinson III taps the rebound back out to Burke, the point guard hits Jordan Morgan in the post. Morgan has trouble handling the pass, but finds Stauskas in his favorite spot. Stauskas pump-fakes and steps to the side, creating just enough space for him to get the shot off. The freshman drills the shot, from behind the backboard, and all of a sudden Florida’s hard-fought 11-point deficit is back up to 14 and the air has been utterly removed from the Gators’ tires. That’s the power of having a dead-eye 3-point shooter: a guy like Stauskas can single-handedly halt an opposing team’s run, when

After the game, Burke revealed he had been sick during the Kansas game and was experiencing serious back pain during Michigan’s game against Florida. Lucky for Michigan, the Wolverines have a backup point guard who’s always ready to fill in. Spike Albrecht played 14 minutes in Michigan’s Elite Eight matchup against the Gators, and he made the most out of every second. Albrecht had just as much to do with stopping Florida’s second-half run as Nik Stauskas did in the previous play. Florida hit a two right after Stauskas’s three, but Mitch McGary hit a layup to stretch the lead back out to 15. As Florida was inbounding the ball, Albrecht stole Will Yeguete’s pass to Scottie Wilbekin and hit a pretty incredible up-and-under against the 6-foot-10 Erik Murphy. It was a back-breaker for the Gators, as the lead got back up into blowout territory in just over four seconds. The next play of the sequence features the most Spike Albrecht play ever, stealing the ball on a botched screen-splitting by Wilbekin and then calling timeout to preserve possession — with five and a half minutes left to play in an 18-point game. Just a few seconds later, Albrecht jumps a passing lane, gets another steal and takes the ball to the cup.  Finally, Burke finds Albrecht for the freshman’s requisite 3-pointer. Albrecht’s superb play was the cherry on top of a delicious sundae of a game for Michigan. On to Atlanta.