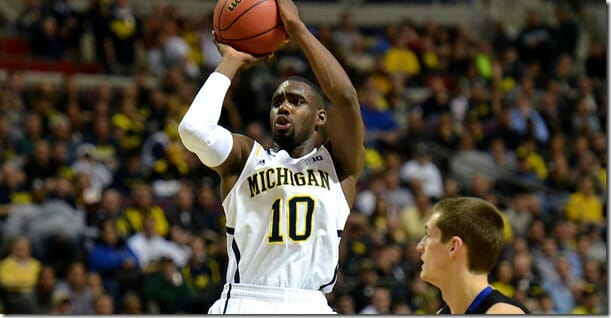 The first statistic that is going to be broadcast on repeat this week: John Beilein is 0-9 against Jim Boeheim. Two of those wins were while Beilein was at Richmond, six while he was at West Virginia and one while he was at Michigan.

This was John Beilein eight years ago:

“I don’t know how to beat it,” West Virginia head coach John Beilein said. “I’m 0-7 against Coach Boeheim and I haven’t found a way to beat him. And it’s so consistent every year. … You can’t beat it.”

Beilein hopes he found the answer in the last eight years: talent. The difference between those games and this one is that now Beilein has a roster loaded with future pros; easily the most talented of his career. But Boeheim’s roster is no slouch. This is the best defensive team that Boeheim has fielded in the Ken Pomeroy era (2003 onward).

Michigan hasn’t played against many zone defenses. The Wolverines have faced zone defense on 325 possessions this year, scoring 328 points for a respectable 1.01 points per trip. That scoring output ranks a solid 86th percentile nationally. All of that sounds good but this is a small sample, just 14% of Michigan’s half court possessions on the season.

Most of the zone defenses that Michigan has faced this season play zone because they aren’t great; not because they have a great zone. The Wolverines did face former Syracuse assistant Rob Murphy at Eastern Michigan and dismantled the Eagles to the tune of 1.33 points per possession but using that as a comparison is akin to South Dakota State comparing Michigan to UMKC.

Syracuse’s zone is unlike any other because the Orange have such great length and have great ability to turn teams over or block shots despite playing a zone defense. The Orange have the fourth best effective field goal defense in the country, allowing opponents to shoot 43% on twos (20th) and 28% on threes (3rd). They rank 1st nationally in blocked shot percentage, blocking 19% of their opponents’ attempts, and seventh in steal percentage.

Indiana had 34% of their shots blocked and turned the ball over on 28% of their offensive possessions; watching a very good – previously No. 1 – offensive Indiana team that went out with a whimper against the Syracuse zone should serve as a warning for how devastating the Syracuse zone can be.

Tim Hardaway Jr. in the middle but others just as critical

But the numbers don’t paint Hardaway as the best zone scorer on Michigan’s roster by any means.

The key might be Hardaway drawing in the defense in the high post and kicking the ball out to Burke and Stauskas, who both love to shoot against the zone. Getting the ball into Hardaway and then back out to the shooters on the outside will eventually force ‘Cuse defenders out of position.

I wrote about Syracuse’s 2-3 zone and how to beat it almost three years ago before Michigan and Syracuse faced off in the Atlantic City in November of 2010. The basic keys to beating the zone are: attack the gaps and force numbers advantages, get the ball in the high post or reverse the ball effectively for open shots.

While Burke and Stauskas are both great against the zone, their effectiveness is likely to come from different scenarios. Michigan will need Burke to get in the gaps and create for his teammates; something he’s proven time and again that he’s capable of. Fran Fraschilla wrote this in 2003 while previewing a Texas-Syracuse Final Four matchup, replace Ford with Burke and you get the picture.

The easiest way to score against a zone is to beat it down court. Using Ford’s ability in the open court to get easy baskets before Syracuse can get back to its zone will be crucial to the Longhorns’ success. Texas will also count on Ford’s quickness to attack the top of the zone with dribble penetration, forcing Duany and McNamara to contain him. This will create, with quick ball movement, a “4-on-3” advantage, temporarily, to get some open looks for Mouton, Ivey, and Harris.

Texas must also set screens at the top of the zone to create confusion as to who will be responsible for Ford. This gives him a different way to penetrate into the lane from the top. Also, I would look for Ford to get the ball to Thomas and Buckman in the middle of the zone on “flash cuts” from behind the zone, where they can catch it, draw defenders, and kick it back out to the ‘Horns shooters. Keep in mind, Auburn put an athletic Marquis Daniels in the middle to catch and create, and it nearly got the Tigers past the ‘Cuse in the Sweet 16.

Stauskas (off the charts) and Robinson (very good) are both effective zone players but they will have different roles. Michigan will try to float Robinson in the short corner of the zone, something Beilein will also likely try with McGary, while Stauskas is going to need to be ready to fire off of Burke’s drive and kick. We should still see a fair share of ball screens against the zone, Michigan has run ball screens 9% of the time against the zone and scores an impressive 1.21 points per trip in those situations. A high ball screen will give Burke a better opportunity to find a gap in the zone and create offense.

Syracuse’s length is what makes it particularly dangerous. The Orange have an average height of 79.1 inches, second best in the country. There’s only one player, Brandon Triche, in the top of the Syracuse rotation that is shorter than 6-foot-6, making it especially difficulty to attempt long range shots. There’s a lot of talk about the randomness of 3-point defense but Syracuse’s defense has ranked in the top 50 nationally in each of the past five seasons in 3-point defense and ranks a ridiculous 8th this season. The Orange’s tournament performance has only bolstered that effectiveness.

The Orange aren’t a great offensive team, failing to reach a point per-possession twice in the NCAA tournament but they aren’t bad either. Syracuse is 21st nationally in adjusted offensive efficiency and 5th in the Big East in per-possession offensive output.

Syracuse isn’t a great shooting team – 49% on twos, 34% on threes, 49% eFG% for the year; 47% on twos, 30% on threes, 46% eFG% in Big East play – but is a great offensive rebounding team. The Orange rebounded 39 percent of their missed shots for the season, 8th best nationally, and weren’t far behind at 38 percent in Big East play. Baye Keita and Rakeem Christmas are among the best offensive rebounders in the country but across all positions to Orange are aggressive in crashing the glass.