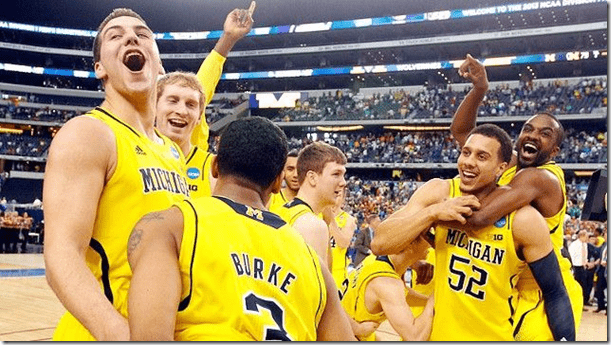 Michigan is headed to its first Final Four in 20 years and now sits two games away from its second National Championship in program history.

With just three games of the tournament remaining, the national media focus is all on Michigan, Syracuse, Louisville and Wichita State. We rounded up a number of national media takes on Michigan’s run to the Final Four and what the Wolverines’ chances are to win the whole thing.

Michigan wasn’t expected to make it this far — Indiana was clearly superior to the Wolverines per-possession in Big Ten play — and so John Beilein’s team certainly merits inclusion under the “surprise” label. But I think the nature of that surprise has been misunderstood, starting with the fact other recent Final Four teams (namely, again, Butler and VCU in 2011) made it this far despite even longer odds. Start with the fact there was a good deal of attention paid to the Wolverines’ defense in particular this season, and more specifically to the idea that the level of D played by Beilein’s team (pretty good, but certainly nothing special) might be a deal-killer in terms of this team reaching Atlanta.

Frankly, this scrutiny of the Michigan defense confused me on a couple of fronts. First, during this team’s time of struggle (basically the month of February) the offense wasn’t exactly poetry in motion, either, regardless of what the season totals were saying. And, second, it’s a safe bet that, until further notice, no Final Four team will be as bad at anything as Louisville was at offense in 2011-12, and the Cardinals did indeed make a national semifinal anyway.

Ken Pomeroy says Michigan is getting hot at the right time:

Finally, Michigan was the flip side of Louisville entering the tournament. They owned one of the country’s best scoring units, but had some questions on defense. With the exception of the miracle win over Kansas, Michigan’s defense has been much better in the tournament than it was during the rest of the season, holding Florida to its least-efficient game of the year, and limiting VCU to its second-worst offensive game. And offensively, the Wolverines also have been very good, though it might be closer to disappointing without Mitch McGary’s contributions.

Trey Burke’s heroics rightly received top billing after the game against Kansas, but it was McGary who went off for 25 points and 14 rebounds to keep the Wolverines within striking distance while Burke struggled early. In fact, McGary could rightly claim to be Michigan’s offensive MVP to this point of the tourney. He’s emerged as the clear second option behind Burke and he’s been much more efficient than his team’s point guard, converting 33 of 45 2-point shots while racking up 14 offensive rebounds. He’s heavily involved in the team’s offense, has missed 12 shots, but cleaned up 14 misses. That’s amazing production from a guy who started just two games during the regular season.

Jamie Dixon talks Michigan at ESPN but notes that the Wolverines “don’t run a lot” something most would disagree with.

Dixon: “I just remember how good [Trey] Burke was and the spacing and obviously how much [Mitch] McGary has changed. Jordan Morgan was a heckuva player — this guy can score. Burke is the best point guard in the country. That’s a good place to start with them. They don’t run a lot, just ball screens and back-cuts. I would say this is a better rebounding team than [coach John Beilein] has had at Michigan. We outshot them, we beat them in every aspect, but they outrebounded us [31-21], and that never happened [against a Beilein team]. This team is stronger and a better rebounding team and a better defensive team, and that’s what has made them good enough to get this far.”

Michigan (4) vs. Syracuse (4): Trey Burke is arguably the best player in America. And his uncanny late-game explosion against Kansas in the Sweet 16 proved as much. Burke guides a unit that seems built to disrupt Syracuse’s 2-3 zone. The Wolverines are shooting 49.5 percent from the field in the NCAA tournament. Burke is quick enough to exploit the creases in the scheme and find members of his talented supporting cast. Nik Stauskas (6-for-6 from the 3-point line in Sunday’s win over Florida in the Elite Eight), Glenn Robinson III and Tim Hardaway Jr. can all hurt opponents from different spots on the floor. Plus, Mitch McGary looks like a future All-American right now (two double-doubles in Michigan’s four NCAA tourney games).

Matt Norlander wrote a feature story on Michigan’s run to the Final Four:

This green Michigan team, younger than any group in this year’s tournament, is going to a Final Four because it’s in bloom. The Wolverines are now what we believed they could be back in November and December. Proof of promise comes in the form of Final Four berths, and that’s what UM has finally come around to. Age is no issue. It plays great, beautiful, dazzling offense. It has weapons as varied, strong, multidimensional and renewable as any team in this tournament.

Why Michigan might win it all: They’ve got the best player in Burke, who helps fuel an offensive attack that’s the most dynamic in college basketball. Michigan’s O has been top-five in hoops all season long, and now it’s rounding fully into form. Having the best player at the Final Four always means you have a chance.

Why Michigan might not win it all: That defense is the reason. It’s the reason Michigan didn’t finish in the top three in its own — very good — league. It’s shown up here the past two weekends, but there is some suspicion there would be problems here if it were to face a team like Louisville.

Louisville is the best defensive team in college basketball, and Michigan’s the best on offense. It would be only fitting if these two were to meet in the national title game. And that is what I think happens. This team’s too fun, too efficient, too good at what it does to get topped by a Syracuse club with a great zone D but that lacks in overall ability with the ball.

So I like Michigan in the title game, but I’ll stop there.

Chance of winning tournament before Round of 16: 3.8 percent.

Steve Kerr to the Detroit News on the Michigan-Syracuse matchup:

“As everyone knows, when you go against Syracuse you’ve got to deal with that athletic zone,” Kerr said. “It will be tough for Burke and (Nik) Stauskas to see over those long defenders. They saw a zone against Florida that’s going to pale in comparison to what they’re about to see. The key with Michigan is navigating that zone, trying to get good shots and getting their guards going. They’re so dependent on those guys for scoring, so they’re going to have to find some open looks, and it’s not going to easy.”

Ken Pomeroy looks at the least like comebacks this season, Michigna’s win over Kansas ranks 15th

Michigan’s comeback over Kansas, trailing by ten with 2:32 left and playing defense, had a 0.62% chance of occurring according to my win probability model. This was the 15th least-likely comeback of the season. (Ranking just ahead of Michigan’s own collapse to Penn State on February 27.) What follows are the 13 comebacks from this season that ranked as more unlikely.