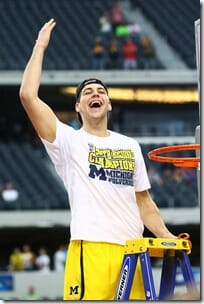 Mitch McGary Michigan Wolverines v Florida 6O4hNFV-p20x[1]" alt="Mitch McGary Michigan Wolverines v Florida 6O4hNFV-p20x[1]" src="http://www.umhoops.com/wp-content/uploads/2013/04/MitchMcGaryMichiganWolverinesvFlorida6O4hNFV-p20x1_thumb.jpg" width="204" height="304" align="right" border="0" />It’s understandable for the NBA to be interested in Mitch McGary. At a deceptively coordinated and agile 6-foot-10, his ceiling is hard to place, not to mention the fact that his production has been rapidly increasing throughout the NCAA tournament.

McGary is averaging 17 point and 11 rebounds in tournament games, his best performances coming against some of the country’s best defenses; VCU, Kansas and Florida are all teams known for their defensive ability, and McGary owned each of them.

In fact, the spotlight on McGary has grown so bright that Chad Ford recently projected the freshman as a potential first-round pick in this year’s NBA draft. However, after Michigan’s open practice on Tuesday, McGary told MLive’s Kyle Meinke that he is definitely staying at Michigan for his sophomore season. Just the fact that he had to make that clear testifies to the new attention McGary has been getting from national media during Michigan’s tournament run.

Through it all, McGary knows the importance of staying humble.

“I just try to stay humble, stay level-headed,” McGary said after practice on Tuesday. “Thank the people for congratulating me and stuff, if they want my autograph or a picture. I’m an average guy, I just happen to play basketball here.”

It’s that kind of attitude that has endeared him to Michigan fans throughout the year. Though a once-heralded prospect, McGary never hesitates to dive for loose balls and focus on the glass.

He also knows his success this season hasn’t only been a result of his individual effort.

Not only that, but McGary knows that if he ever gets a big head, his dad will have something to say about it when he gets home.

“My dad always told me to stay level-headed and stay humble and hungry,” McGary said. “If I ever get cocky, he’ll teach me a lesson when I get home. So I take that advice.”

Michigan will be facing Syracuse’s heralded 2-3 zone on Saturday. While they have faced 2-3 looks before this season, they’ve been sporadic and ineffective — think Eastern Michigan.

Syracuse’s is anything but.

The Orangemen defense has been dominant so far in the tournament. They have dominated three of their four tournament opponents, giving up over 50 points to only one — UC Berkeley. They held Indiana, the nation’s best offense all season, to just 50 points on 65 possessions.

“We’ve been prepared just by our schedule and some of the teams we’ve faced,” Jordan Morgan said after Michigan’s open practice. “But nothing quite like the zone we’re seeing on Saturday.”

Like most of Michigan’s match-ups, it starts with the Wolverines’ defense. Presumably, if Michigan can get stops, it can get out on the fast break. If that happens, it will be harder for Syracuse to get set up in its zone look.

“Us defending well will be good for us because it will get us out on the break,” Morgan said. “That would be an advantage we would like to capitalize on. Because getting that defense set is not the easiest thing in the world.”

While the famed 2-3 zone employed by Jim Boeheim’s teams will be tough to beat, there are ways to go about limiting its effectiveness.

Morgan stressed the need to not be deceived by the Orange’s length — they can make you see passing lanes that aren’t really there.

“It’s hard to go against because they have a lot of length, athleticism, and they’re very active. It makes it hard,” Morgan said. “Passes that you think are there, aren’t necessarily there. So you have to really be solid, use a lot of fakes, and take your time attacking the zone because rushed attempts are going to lead to turnovers and points for them in the fast break.”

Michigan players can feel the Final Four excitement on campus

When Michigan finally pulled into the parking lot of the Crisler Center on Sunday night, they were greeted by at least a few thousand loyal fans who waited for hours to greet them.

It was just one example in a week that’s been full of autograph requests, Ticket inquiries, congratulations and simple thanks for returning a program that has been down for so long to the promised land of the Final Four.

“Just the support from everyone at school and just the fans in general has been great,” Nik Stauskas said. “Obviously, Michigan hasn’t been in this position in a long time, so I know everyone is really excited to be back here.”

It’s been a fun transformation to watch, a school that is traditionally chiefly concerned about football falling into a bit of true March-induced madness.

However, the players aren’t worried about the attention being a distraction. By all accounts, the team knows it still has a lot of work to do.

“Yesterday we had an off day, so we were on campus a lot more and heard a lot of that talk. Today, we’re focused, back to classes and then straight to practice. I think we’ve got our minds back on track,” Glenn Robinson III said. “That one day that we got to celebrate, I think it’s something that we needed. But now, we have to be focused and ready to play.”