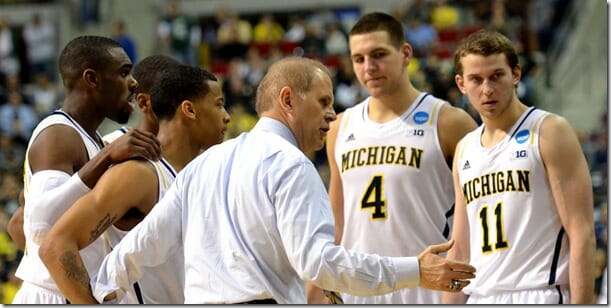 ATLANTA — After Florida lost to Michigan in the Midwest regional final, Gators head coach Billy Donovan said he thought Mitch McGary would be less effective against Syracuse’s 2-3 zone because there wouldn’t be the opportunities he had off the pick-and-roll game with Trey Burke.

While the pick-and-roll can still be effective against the zone, it does tend to eliminate the roll man as a primary option. Michigan will be searching for different ways to score the ball in half court sets against Syracuse’s zone.

“We have to change what we do because we’re going to see the zone for 40 minutes. We all know it,” Beilein said. “It’s something we have to practice hard at. We don’t see it very often.”

Michigan relies on a lot of isolation action with Trey Burke. Beilein knows that playing against a zone will render that portion of Michigan’s playbook somewhat useless on Saturday.

“Certainly when you play a zone defense, it’s going to negate isolation. We were able to isolate Trey a lot of times and put into two men guarding him, what we call a quick man, they’re reacting, trying to fly around the floor, find different people. The zone still gets into some of that.”

What it may call for is a diversification of the offense. If that’s the case, Michigan has been well-prepared — players like Nik Stauskas, Glenn Robinson III and even Spike Albrecht have been stepping up all tournament long.

“When you have a player like Trey Burke, you get the ball in his hands as often as you can. If zone negates that, we’ll just have to do our best,” Beilein said. “Our hope is we have enough guys that see the floor that we don’t have to have the ball in one guy’s hands all the time.”

Beilein focused on Michigan’s ability to come together as one, rather than any individual.

“I think all our guys have these equal key pieces in this game, whether it’s shooting, whether it’s finding the next man, we call it the Gretzky pass, the pass that leads to the assist.  Those things which are usually very similar to most winning teams.”

Historically, John Beilein’s teams have not been known for their fast-break ability. The scouting report on Beilein-led teams has always started behind the three point line.

Not so this year. This year’s Michigan team has attempted 34% of its field goals from behind the arc, a lower percentage than any of Beilein’s teams of the last decade. Michigan’s most efficient form of offense is undoubtedly transition. While the Wolverines are selective about when they run, they are usually successful when they do.

John Beilein said the decision to run more was made early in the year, and with a bit of trepidation given the team’s youth.

“We have been fast-breaking all year long, and we have to,” Beilein said. “We made up our minds early in the year, that is one of the things we’d like to do offensively that would be really hard with this particular team because of their youth. But they do like to run, they know how to run, we have tremendous guard play, we have bigs who know how to rebound.”

Mitch McGary is one of those bigs that knows how to rebound – and outlet pass. In the NCAA tournament, McGary has grabbed an astounding 34% of the available defensive rebounding opportunities while on the floor.

Being able to run will be especially important against Syracuse’s zone look — if Michigan can force misses and get down the court before Syracuse gets set, it will limit the effectiveness of the 2-3.

Unfortunately, that is much easier said than done. Unique among zone teams, Syracuse is extremely adept at getting back on defense and setting up quickly.

“Their transition (defense) numbers are really good for a zone team – extremely good,” Beilein said. “So, they do have good coverage coming back. Against a zone there’s two things: you want to get it up there and get to the basket before they set; and two, if they do score you want to get it up the floor quickly so you have more time to probe if you need it.”

John Beilein spent the first 20 years of his coaching career planted firmly in upstate New York. From Erie Community College to Le Moyne to Canisius, Beilein remained in one place: directly in the orbit of Jim Boeheim at Syracuse.

And during all that time, a relationship has developed based on mutual respect. Boeheim has been a major force in Beilein’s coaching life ever since the Burt, NY native started his career.

“It goes back for years and years,” Beilein said during a press conference at the Georgia Dome on Thursday. “Even when I first broke into coaching, going to the first clinics, Jim was talking about the 2‑3 zone back in 1975, 1976, 1977 when I began coaching as a high school coach.  Stayed consistent at community college at Nazareth.  Crossed paths at Le Moyne college in Syracuse.”

Boeheim along with his innovative — and effective — 2-3 zone had a heavy influence on basketball all over upstate New York. Beilein even said he ran a variation of Boeheim’s 2-3 when he was getting started.

“I used to play the same 2‑3 zone for a long time,” Beilein said. “Everybody in Upstate New York did, has for a long time. But found maybe I wasn’t as good at times and changed to 1‑3‑1.”

The friendship the two established during the time they worked together at coaching clinics resulted in a growing respect between the two that eventually led to Boeheim assisting Beilein in getting his first Division I coaching job.

Beilein also suspects Boeheim might have had something to do with him getting his major-conference job, at West Virginia, in 2002.

“We became friends during that time and I have had great respect for him,” Beilein said. “Along the way, he assisted me a great deal in actually getting my first Division I job at Canisius.  I believe he had something to do with me going to the Big East at West Virginia.  He was very instrumental. I followed him and respected him very much.”

But friend or not, Beilein is very much aware of the powerful coaching mind he’ll be facing on Saturday, adding that Boeheim’s intellect may extend beyond the bounds of basketball, as well.

“He’s one of the greatest minds in basketball, about anything.  The guy is smart,” Beilein said. “You ask him about college football, he’ll tell you.  You ask him about North Korea right now, he probably knows all about that.  He is a smart guy.”