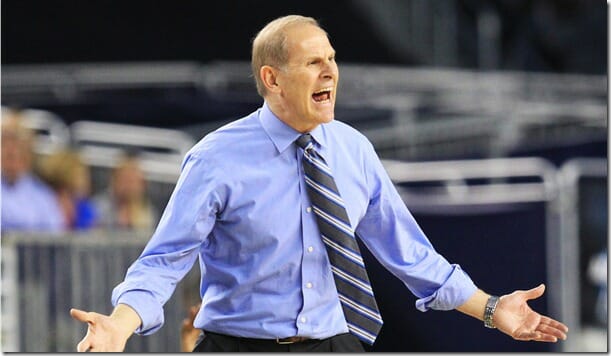 John Beilein faced the media this afternoon at the Georgia Dome in preparation for Saturday’s Final Four matchup with Syracuse. Read what Michigan’s head coach had to say in the transcript below.

COACH BEILEIN:  It would be very obvious that the University of Michigan is so proud to be back in the Final Four.  Our university, our team, all the staff that’s involved that’s worked very hard to get Michigan in this position.
We’re practicing hard.  We’re looking toward to today and tomorrow’s practice.  We still have a lot to do if we’re going to be successful.  But we’re all engaged and going to do our best.
But on behalf of the whole university, we feel a great amount of gratitude to be back in the situation again.

Q.  Coach, could you trace a little of your history with Coach Boeheim, what it’s like to face him now.
COACH BEILEIN:  It goes back for years and years.  Even when I first broke into coaching, going to the first clinics, Jim was talking about the 2‑3 zone back in 1975, 1976, 1977 when I began coaching as a high school coach.  Stayed consistent at community college at Nazareth.  Crossed path at Le Moyne college in Syracuse.
So we became friends during that time and I have had great respect for him.  Along the way, he assisted me a great deal in actually getting my first Division I job at Canisius College.  I believe he had something to do with me going to the Big East at West Virginia.  He was very instrumental.  I followed him and respected him very much.
He’s one of the greatest minds in basketball, about anything.  The guy is smart.  You ask him about college football, he’ll tell you.  You ask him about North Korea right now, he probably knows all about that.  He is a smart guy.
I think the Syracuse people already know that.

Q.  Coach, your thoughts on the Rutgers situation.  Back when you were playing, did you ever experience anything remotely similar to that?
COACH BEILEIN:  I think all the coaches in the community are disappointed at how that transpired.  I don’t know Mike Rice well enough.  I don’t know the athletic director enough.  But I know that in this day and age, there’s certain lines you’re not going to cross with your student‑athletes.  We want young men to play for us because they love coming to the gym every day.
Mike must have done that quite often ’cause he won a lot of games, was very successful.  At the same time, those incidents are uncalled for, and I’m sure that Mike regrets it.

Q.  You mentioned your time in that area, which obviously is Syracuse area, Rochester.  Do you sense you still have, even though they’re Syracuse fans, a lot of support in the western and central New York area?
COACH BEILEIN:  I have a huge family, one of nine children, my mother was one of 13.  The Niland family was one of the first families in coaching in the Buffalo area.
I’ve called an old friend of mine on the way down and said, What color are you wearing?  Do you have orange underwear on with the blue shirt over the top?  There’s a lot of people that I know that our families are involved in basketball, have several cousins that coach.
It’s a great thing for everybody to have.  There’s a lot to talk about after a tough win, in western New York, central New York.  I just think it’s all good.  It’s just all good.

Q.  Glenn Robinson, III, has been a key piece in this tournament a number of games.  In this matchup, how vital will he be Saturday?
COACH BEILEIN:  Here is the key with all our guys, not just Glenn.  When we get into good defense, we can get into defense.  That’s where Glenn is a superior player.  That will be a goal.
I think all our guys have these equal key pieces in this game, whether it’s shooting, whether it’s finding the next man, we call it the Gretzky pass, the pass that leads to the assist.  Those things which are usually very similar to most winning teams.
So Glenn does everything, he does it so quietly.  Then you look at the stat sheet at the end and you say, Wow, how did he do all those?
Playing against Syracuse, how they’re playing right now, we need all our players to have a great game.

Q.  We mentioned Le Moyne and Nazareth.  When you were paying your dues at the Division II and Division III levels, did you ever think something like this was possible for you?  That being said, how satisfying is this for you personally to make it to the Final Four?
COACH BEILEIN:  I didn’t think much about that, so, no, I didn’t think it was possible because I didn’t think about it.  I’m sort of always thinking about what can we do right now to be a better team, what can I do to be a better coach, a better father, a better teacher.  Always with the idea that if you do all those things, anything is possible in your life.
So for me to be sitting at this podium right now, being in this Final Four, certainly when we went to West Virginia and we came to Michigan, the possibility of getting here one day rose.  You just never know.  In today’s day, even Canisius or Richmond, you could have things go right and be the mid‑major that gets in here.
It’s tremendous, but pretty much the way I have lived my life, try to do your best and anything can happen, good or bad.  And you better be able to deal with it either way.

Q.  Coach Beilein, at the Midwest regional, Billy Donovan said your guys are so dependent on Trey Burke to distribute to them that he didn’t feel McGary would be as effective in the pick’n roll against that 2‑3 zone.  What would you say to that and also what advantages does a guy who can penetrate like Burke give you against that zone?
COACH BEILEIN:  Certainly when you play a zone defense, it’s going to negate isolation.  We were able to isolate Trey a lot of times and put into two men guarding him, what we call a quick man, they’re reacting, trying to fly around the floor, find different people.  The zone still gets into some of that.
But, no, we have to change what we do because we’re going to see the zone for 40 minutes.  We all know it.  It’s something we have to practice hard at.  We don’t see it very often.
Our hope is we have enough guys that see the floor that we don’t have to have the ball in one guy’s hands all the time.
When you have a player like Trey Burke, you get the ball in his hands as often as you can.  If zone negates that, we’ll just have to do our best.

Q.  You talked today about the other stops in your coaching career.  Did moving around so much sort of teach you how to adapt to new challenges?
COACH BEILEIN:  It’s probably the reason why we’re still here, why we’re still coaching 35 years later.
You cannot get stale when you’re fighting for your life in all those situations I was in.  Each opportunity that we embraced, the program was at a low, or one of its lower points.  So we would say, Okay.  That clock is ticking.  They’ll be with you the first, second year.  You don’t start turning it around, there’s going to be somebody else.
So you’re in a survival mode.  When you’re in survival mode, you find ways to improvise, to get better, self‑examine yourself daily.  As a result it keeps you sharp.  It wasn’t intentional.  I’m talking survival.  You have four children.  You’re trying to make it.  You got to do what you have to do to make sure that you can do that.
So you just change.  We’ve been changing and changing and changing.  I used to play the same 2‑3 zone for a long time.  Everybody in Upstate New York did, has for a long time.  But found maybe I wasn’t as good at times and changed to 1‑3‑1.  Now the 1‑3‑1 hasn’t been as effective.  We still use it, but we’re a straight man‑to‑man team now.  I probably wouldn’t have done that if I hadn’t had all those changes.

Q.  The Rutgers practice video, how do you think that will affect or change the coaching profession going forward?
COACH BEILEIN:  You know, I don’t know.  I think this is a very, very unique situation.  It is not representative how Division I coaches in football or basketball represent themselves in practice.
You know, obviously today with the videos anywhere, we have to be cognizant, whether I’m at a restaurant, whether I’m going to the bathroom, whether I’m going anywhere, there could be a video, walking out, how I treat an autograph, there could be a video.  That’s life right now.
But like you said, I’m sure that Mike regrets this very much.  How often that was, who knows.  But I would think you look at almost every Division I coach, football coach, you watch their practice videos, 1 in 1,000 might have something like that in it.  Coaches are going to coach their kids, they’re going to try to do it in a positive way.
Yeah, there’s moments where you coach a kid up and you tell him a few things that he probably needs to hear.  But for the most point, people teach.  That’s how we’ve always done it.  Maybe we’re soft, but we just teach.

Q.  Coach Beilein, today at 4:00 there will be an Associated Press Player of the Year award presented.  What in your mind, if Trey Burke were to win it, makes him deserving of all of the accolades?
COACH BEILEIN:  What I’ve said over and over again is that Trey Burke has been playing this year, because of an injury to Jordan Morgan, Tim Hardaway is a fabulous player, and Trey wouldn’t be there without Tim, and he would tell you the same thing.  He has been with three to five freshmen all year long.  Here he is this cagey sophomore, veteran sophomore.
C’mon, the whole year he has been just as calm and cool as if he was a fifth‑year redshirt senior guard.  So you look at that.  He didn’t come in as a freshman, sophomore, he had all these veterans around him, he just has to fill in the pieces, much like he had to do this year.
This team carried itself, he was just out front all of the time so many times.  Those young guys look at Trey, they see poise, they say patience.  It’s worked very well.