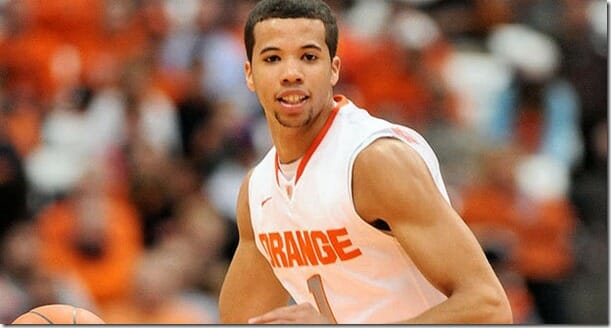 Michigan will face Syracuse’s vaunted 2-3 zone in the Final Four on Saturday but the Wolverines will also have to stop a talented Syracuse team on the offensive end of the floor.

To further breakdown Michigan’s Final Four matchup we dug deeper into the numbers to utilize data fueled by  Ken Pomeroy, Hoop-Math and Synergy Sports and examined the top eight players in the Orange rotation.

Carter-Williams is a great passer, his assist rate of 41% is 11th best nationally, and he has unusual size for the point guard position at 6-foot-6. It’s worth noting that he feasted statistically during the first few months of the season, his assist rate on January 4th was 50.5%, it’s down to 41% and was just 33% in Big East play – less than Trey Burke’s Big Ten best 37%, for example.

The bottom line is that Carter-Williams is not great at creating offense for himself but if you let him get in the lane he does a great job of finding his teammates. He’s also a great defender at the top of the zone with a 4.9 steal percentage, 12th best in the country.

Fair is an intriguing prospect and considered a potential pro by many. At 6-foot-8, 203 pounds, Fair is more of a combo forward but he plays a lot of the three for Syracuse. His 3-point shooting percentage of 48% is good, but he’s only attempted 61 long range shots; he’s just 2-of-6 from three point range in tournament play. Syracuse runs a lot of offense through Fair in the half court, his 500 half court possessions this season are more than anyone else on the Orange roster. Fair is also more effective (.938 PPP) in the halfcourt than other high usage teammates like Triche (.775 PPP) and Carter-Williams (.692 PPP). Fair uses one out of every four possessions spotting up on the wing. His breakdown of shot types in spot up scenarios is: 43% no dribble jumper (1.27 PPP), 26% dribble jumper (.703 PPP), 19.6% drive to basket (.893 PPP), and 6% runner (1.11 PPP).

Southerland is the most efficient player on the roster and the 6-foot-8 forward loves the three point shot. Fifty nine percent of his attempts originate behind the arc and he connects at a 40% clip. Southerland’s offense of choice is a spot up jumper on the wing from Michael Carter-Williams but he’s also an effective transition shooter and a good shooter using screens (10.5% of offensive possessions). The 6-foot-8 senior has to be high up on the scouting report because he’s the only true three point shooter on the Syracuse roster; the three other ‘Cuse players with at least 100 attempts are shooting 30% or worse while Fair (48%) and Grant (40%) have combined to attempt just 76 threes. When left open, he’s almost automatic. Fair has an 83% eFG% on unguarded jumpshots, scoring 1.69 points per possession in those scenarios. For perspective, those numbers are better than Nik Stauskas – Michigan’s automatic jump shooter.

Southerland is ranked nationally by Ken Pomeroy in both shot blocking and steal percentages and is able to influence the game on both ends of the floor. Southerland’s weakness offensively is the mid-range because that’s where he’s creating his own offense. He’s great from three (40%) and in his limited attempts (13% of FGAs) at the rim where he shoots 91%. But 75% of those looks at the rim and 94% of his 3-point attempts are assisted, he shoots just 36% on 2-point jumpers and only 61% of those looks are assisted.

Triche isn’t a great jump shooter, with just a 37% eFG% on jumpers, but he’s got a nice runner (50% eFG%) and is a good finisher at the rim for a guard (54%). While his overall jump shooting numbers are rough, his guarded-unguarded splits are dramatic. He scores just .46 points per guarded jump shot (23% eFG%) compared to 1.21 points per unguarded jump shot (61% eFG%).

Christmas is a defensive presence but his offense is lacking. He uses just 14% of Syracuse’s possessions offensively and 35% of his shots come on cuts to the basket. He’s a good finisher in those situations but he scores just .69 points per offensive rebound and .62 points per post up play. He’s a little better in the pick and roll game but overall is mostly just a finisher on drop offs and cuts to the hoop. Defensively he’s the best shot blocker on the best shot blocking team in the country. He’s somewhat foul prone, being whistled for 4.9 fouls per 40 minutes.

Over 60% of Keita’s offense comes on put backs or cuts to the basket with another 20% coming as a roll man in the ball screen. He’s good cutting to the basket (1.41 PPP) but is just average on put backs (1.02 PPP) and struggles as a roll man (.78 PPP). Keita is a game changer in the 2-3 zone with a block rate ranked 60th in the country. He’s listed at 6-foot-10 but his wing span is 7-foot-2 which is scary when combined with his athleticism. Mitch McGary, Jon Horford and Jordan Morgan will need to get a body on him and force him out of the lane when Syracuse shots go up because otherwise he’ll just reach over and grab offensive rebounds all night.

Grant, 6-foot-8, is mostly effective at the rim. Over half his field goal attempts come at the rim, where he shoots 61%, 15% of his shots are 2-point jumpers where he shoots just 26% and 13% are three pointers where he’s 40% (6-of-15). He hasn’t hit a three since late January and is predominantly a slashing threat, evident by his 64% free throw rate. While he can get to the stripe with regularity, he’s just a 64% free throw shooter.

Cooney has attempted over 70% of his field goals from three point range but is just a 26% three point shooter from beyond the arc. His 55% eFG% in transition dwarfs his 39% eFG% in the half court, so he’s clearly more comfortable in an uptempo game.

Syracuse isn’t a great offensive team. The Orange have scored just 182 points on 187 possessions in their last three NCAA tournament games; .97 points per possession. Michigan’s offense has surpassed 1 point per possession in 10 of the last 12 games and has failed to meet that mark just five times.

Michigan is playing great offensive basketball and will probably get its fair share of points. The real key seems to be whether the Wolverines can slow down Syracuse’s inconsistent offense.

I expect Michigan to switch almost everything from the one through four positions as there aren’t great fits across the board. What Michigan loses by not having great natural defensive fits, it gains by its flexibility to switch screens. The combination of Burke, Hardaway, Robinson and Stauskas against Carter-Williams, Triche, Southerland and Fair is all somewhat interchangeable. Ideally you will probably see something like Burke on Triche, Hardaway on Carter-Williams, Stauskas on Southerland and Robinson on Fair to start. However, what does Michigan lose if Hardaway gets switched onto Fair or Burke on Carter-Williams? Not a lot.

Syracuse doesn’t have much of a post game and the real key will be the Wolverine’s ability to clean up the defensive glass where Syracuse generally feasts.