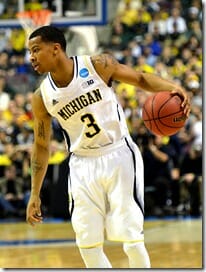 ATLANTA — Trey Burke added his second Player of the Year award in as many days this morning as he was announced as the winner of the USBWA Oscar Robertson Trophy.

Burke averaged 18.8 points, 6.8 assists, 3.1 rebounds, 1.6 steals and just 2.2 turnovers per game during his sophomore season while leading Michigan to its first Final Four appearance since 1993.

“I want to thank my coaching staff. They do a great job of putting the ball in my hands and allow me to make plays, just put me in certain situations,” Burke said upon receiving the award. “They encourage me even when I get down. I just want to thank them for this. I know I wouldn’t be here without their guidance throughout the whole year.”

Burke was awarded the AP Player of the Year on Thursday and the John R. Wooden Award, the self declared ‘preeminent men’s collegiate basketball player of the year award’, will be announced later today at 11:15 a.m. eastern on ESPN SportsCenter.

“I want thank the basketball writer’s association for giving this award to Trey, it’s difficult for guards to win anything in basketball,” Oscar Robertson said. “Look at basketball throughout history — they always look at big people. I think guards do all the work (laughs).”