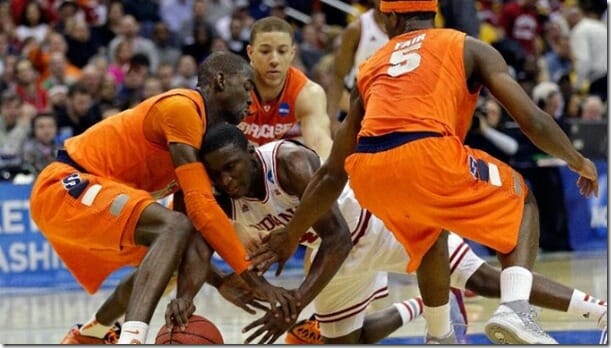 Michigan will play Syracuse tonight in its first Final Four game in 20 years. It’s obviously a big game and there has been no shortage of content around these parts. We’ve discussed the zone, discussed it some more, heard from both coaches, scouted Syracuse on an individual level,rounded up analysts’ predictions, and heard Brandon Triche’s trash talk.

Because we’ve already hit on this game on so many different levels, this preview will focus on the tempo free basics a handful of notable keys to victory. On one end of the floor, Michigan and Syracuse will be battling strength on strength. Michigan’s high octane offense against Syracuse’s suffocating and aggressive 2-3 zone. On the other end it will be a battle of which team can mask its chronic, at times fatal, weakness which has plagued it all season. Syracuse’s offense has been inconsistent and Michigan’s defense has seen its fair share of justified criticism this year.

Syracuse’s defense will be the third defense in the top six nationally that Michigan has faced in its last three NCAA tournament games. The Orange do a great job of defending both twos and threes – so well that even Ken Pomeroy admits it isn’t random – and force a plethora of turnovers. Orange opponents shoot just 43% inside the arc, 28% outside the arc and give the ball away on 24% of their offensive possessions. Many of those turnovers are live ball possessions as the Syracuse 2-3 zone is aggressive and effective, the Orange rank 1st nationally in block percentage and 7th nationally in steal percentage.

Last weekend in Washington D.C., Syracuse held both Indiana and Marquette to their worst offensive nights of the year; both under .8 points per trip. The Orange defense isn’t without its faults, namely defensive rebounding and periodic foul difficulties. Syracuse was the third worst defensive rebounding team in the Big East, allowing its conference foes to grab nearly 37% of their missed shots. ‘Cuse also ranked 8th in free throw rate allowed, surrendering nearly 37 free throws per 100 field goal attempts.

Offensively things aren’t nearly as rosy. Syracuse is ranked 21st nationally in adjusted offensive efficiency but had just the 5th best offense in the Big East at 1.04 points per possession. Syracuse isn’t a great shooting team and that was evident in league play where the Orange made 47% of their twos (7th BE) and 29.6% of their threes (11th BE) for a 46% eFG% (10th BE). The Orange don’t get to the foul line often, Michael Carter-Williams is a main exception, and give the ball away on 19% of their possessions. Syracuse needs offensive rebounding to survive offensively.The Orange rebound 39% of their missed shots, the sixth best offensive rebounding rate in the country, and will test Michigan’s recently improved defensive rebounding.

It sounds simple but this Syracuse zone is tough. Michigan’s shooting average on the season, 54.6 eFG%, would rank as the fourth best shooting performance against the Orange this season and only five teams have managed an effective field goal percentage above 50%. Michigan is going to take a lot of threes and they are going to be pretty well contested as Syracuse defends the long range shot as well as anyone. Nik Stauskas and Tim Hardaway Jr.’s long range shooting numbers have the potential to sway the game in either direction.

Syracuse isn’t a great offensive team but James Southerland can put points on the board in a hurry if he’s open from three point range. The Wolverine defense simply can’t help off of Southerland and needs to do everything within its power to prevent him from finding open looks. Close out hard, force him to dribble off the line, stick with him over screens; force someone else to beat you.

Syracuse doesn’t have a post-up game or other great shooters which leaves Michael Carter-Williams, CJ Fair and Brandon Triche to have to try to make plays off of the bounce. The key for the Wolverines will be preventing dribble penetration and that means that John Beilein will probably opt for a very compact defense.

Michigan has thrived against teams that love to force turnovers. Most recently, the Wolverines dismantled VCU’s much-hyped “havoc” pressing defense. Michigan doesn’t just have the best point guard – and player – in the country, not turning the ball over is a core principle of John Beilein’s program. That’s easier said than done against Syracuse’s zone. The Wolverines will have to attack the zone but show patience and react to the ‘Cuse trap. Turnovers and blocked shots fuel Syracuse’s transition offense, giving easy baskets to a team that can struggle to score at times.

But transition opportunities are equally as important going in the other direction. Allowing .72 points per possession in the half court, Syracuse has the third best half court defense in the country among major-conference teams. It’s transition defense isn’t bad by any means, but it ranks in the 72nd percentile, a far cry from the very top. The exploits of Michigan’s transition offense have been well documented and easy buckets in transition could be invaluable for the Wolverines.

Michigan has moved up to the No. 5 spot in Ken Pomeroy’s ranking system and the formula likes the Wolverines to top No. 6 Syracuse — barely. Pomeroy’s projection is Michigan 67, Syracuse 66 and he gives Michigan a 51% chance of victory at the Georgia Dome. Regardless of the outcome tonight, soak it all up. Final Fours are special and there’s no promise of getting back. The stats can only tell so much as this is a battle of two very good teams and the team that plays closer to its potential is going to be playing on Monday.