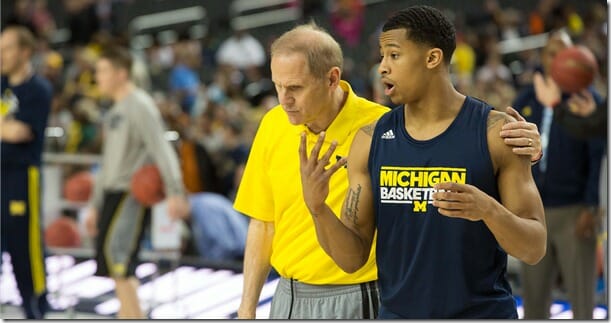 ATLANTA – During the final seconds of regulation against Kansas, Trey Burke dribbled up court, crossed the half-court line, pulled up soon after and heaved a 3-pointer that was well beyond NBA range.

The shot went in, Michigan fans lost their collective mind. The Wolverines won in overtime.

But was it the shot John Beilein wanted? It’s inconsequential to ask that question about that specific shot, but given that Burke has led his team so well throughout the season, is it fair to say his shot selection matches up with the shots Beilein would have him take?

“I definitely think that most of the time. Some shots he doesn’t agree with. But we’re pretty much always on the same page,” Burke said during a press conference on Friday. “You know, just playing for him for two years, I pretty much know what shots he wants us to take or what shots he rather us not to take.”

Shots like the one Burke took against Kansas and some of his other deep threes wouldn’t be good shots for almost any other player in the country. It’s not where Burke is on the court that makes it a good shot — it’s who Burke is as a player.

Burke operates Beilein’s offense with such freedom because the coaching staff trusts Burke to make the correct decision.

“It’s been that way for most of his career here,” Beilein said. “I think in the first couple months, he was reading me.  He was putting deposits in my trust bank more and more every time.  That’s really important.  The more deposits he made, the more I knew I could trust him.”

But it’s not just the decisions Burke makes during games that have earned his coach’s trust. It’s the way the sophomore conducts himself in practice, as well.

“So there’s been this mutual respect for each other, and I mean it.  He’s incredible at practice,” Beilein said. “I’ve never had him one time show any frustration in practice with a coach. I’ve probably at times coached him in different ways. At the same time, I’ve seen great growth by showing him a lot of patience and trust.”

There was a lot of talk on Friday about Syracuse players saying the Orange haven’t watch film of Michigan, their opponent for Saturday’s game. To Michigan fans, this sounded strange and vaguely disrespectful.

But it shouldn’t. John Beilein is film-obsessed. He cuts film of practice and games, and even dipped into old footage from an Eastern Michigan game this year and his West Virginia days to prepare for Syracuse.

“I don’t watch that much tape,” the Syracuse coach said on Friday. “I don’t think that much about some of those things.”

For Boeheim, what matters much more than preparing before the game are the adjustments that occur during it. In practice, Syracuse works on Syracuse. When the game starts, Boeheim makes decisions and adjustments based on the flow of the game and the action he sees from the opposing team.

Boeheim’s assistant coach, Mike Hopkins, said it’s one of the things that makes Boeheim such a great coach.

“So much of it is the game time, and getting in the flow,” Hopkins said. “Coach Boeheim’s a master at in-game changes and manipulations. People who’ve been around him say he’s the type of guy who sees the game five minutes before it happens. I think you’ll see a lot of that – you see who’s having a hot night, you attack it and make adjustments.”

In fact, this is one of the qualities of Boeheim’s vaunted zone defense that makes it so difficult to prepare for. It’s constantly changing based on the opposing offense, amoeba-like until the final whistle.

“Defensively, we try to play our defense the way we play it,” Boehiem said. “We adjust it a little bit before the game when we’re playing somebody, and then we adjust it during the game as we see what they’re doing. That’s just something you have to be flexible with as the game progresses.”

Michigan freshman Nik Stauskas was suffering a bit of a cold streak during this NCAA tournament, hitting just two of the 12 shots he took from long range.

Then, he played Florida.

Against the Gators, Stauskas was a scorching 6-for-6. The Canadian’s resurgence couldn’t have come at a better time for Michigan, as the Wolverines will need Stauskas to hit shots from the perimeter should he find himself open. Not surprisingly, he’s feeling confident.

“After last game, my confidence is really good,” Stauskas said. “I went 6-for-6, so just seeing that ball go through the hoop after struggling for a couple games felt really good.”

It’s a common platitude: good 3-point shooting beats zone defense. But for Syracuse, a team that’s as long as any in the country, penetration has to come first. Stauskas will get open looks off penetration – they won’t be leaving him alone.