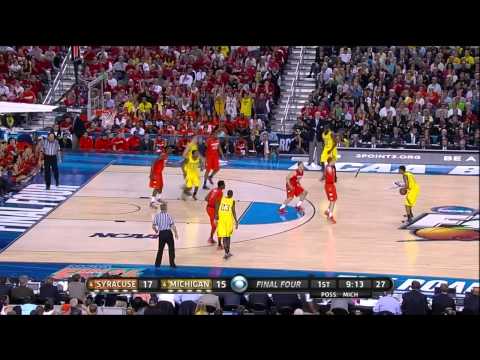 With about 11:30 to play in the first half, Michigan was looking puzzled by the Syracuse zone it had heard so much about in the preceding days leading up to their game on Saturday. The Wolverines missed three straight 3-pointers, opening the door for the Orange to go on a 7-0 run that put them up by five in the game’s early stages. Michigan needed answers, and it found them — in the form of its bench. After missed 3-pointers by Trey Burke, Glenn Robinson III and Nik Stauskas, Caris LeVert said, ‘why not me?’ Tim Hardaway Jr. gets the ball to LeVert at the free throw line in the middle of the zone. Baye Keita steps up from his spot in the middle of the zone to contest LeVert. LeVert, knowing Keita won’t follow him out to the 3-point line, throws a pass to Burke at the top of the key and executes a subtle pick-and-pop on Michael Carter-Williams. LeVert drifts to the arc and Burke, recognizing that he has the attention of five Syracuse defenders, passes back to LeVert, who knocks down the three. After a Jon Horford and one in transition, Mitch McGary finds LeVert for another 3-pointer. McGary recognizes that Michigan has numbers on that side of the court: Trevor Cooney is occupied with Burke, Jerami Grant with Robinson and Rakeem Christmas with himself. This leaves LeVert open on the wing for the three, which he buries. By the time McGary is through doing his best Magic Johnson impersonation on the fast break, Michigan is regained control of the game and is leading, 20-17.

Coming out of high school, part of what made Mitch McGary so impressive was the feel he had for the game — this included a rare passing ability for a kid his size. Michigan’s freshman big certainly looked as though he was in his element passing out of the high post, and he admitted as much after the game. On the first play in this sequence, take a look at how McGary handles himself once he receives the ball at the free-throw line. He surveys, and waits for Brandon Triche to commit to Hardaway’s area. When he sees Triche has done that, McGary fires a pass to Albrecht on the baseline chest-high, in perfect position for the freshman to knock it down. Albrecht was visibly enthused after that first three, and he rode that confidence straight into his second make from beyond the arc – way beyond the arc. With Michigan’s shot clock winding down, the Wolverines couldn’t find an opening and were consigned to swinging the ball from guard to guard on the perimeter, which is no way to beat a zone. But as Trey Burke pump-faked at the top of the key, he had the full attention of three different Syracuse players, including Jerami Grant flying over his head. Burke got the ball to Albrecht, who sunk the deep three (his heel was barely off the Final Four logo at half court). Albrecht was just one of an array of bench players who gave Michigan unexpected contributions on Saturday.

The first half of Saturday’s Final Four victory over Syracuse was pretty much a coaching clinic by John Beilein detailing the finer points of beating the 2-3 zone. There were times when Michigan was frustrated by the Orange’s defensive style, but for the most part, the Wolverines knew exactly how to handle it: get the ball in the middle. Mitch McGary was truly great in this sequence. On the first play, the freshman knocks down a free-throw line jumper, a shot that’s crucial to make so that Syracuse has to respect it, drawing the defense up and allowing more freedom of movement for guys like Glenn Robinson III cutting baseline. On the next play, Michigan is able to push the pace, getting Tim Hardaway Jr. in the middle of the zone that way. Syracuse isn’t set, and McGary cuts baseline — Hardaway finds him for a wide open dunk. The next play in the sequence, however, showcases McGary’s rare passing ability. McGary receives the pass from Hardaway at the elbow. He turns and, quarterback-like, looks off C.J. Fair. McGary fakes the pass to Nik Stauskas, Fair bites on the fake and leaves Robinson under the basket. There aren’t many freshman big men who can make that play. There were times when McGary was manipulating the zone all by himself, and this was one of them. On the last play, Robinson gets the ball in the middle and passes it out to Caris LeVert. From there, LeVert penetrates off the dribble, draws the defense and finds Robinson at the free throw line for a jump shot. Michigan found holes in the zone throughout the first half, and it was mainly because they were able to makes plays right in the teeth of it.

While Michigan was able to find holes in the zone in the first half and exploit them, the second half told a different story. Jim Boeheim was able to make those in-game adjustments he relies on so much, taking away Michigan’s ability to pass the ball around the perimeter by trapping and playing pressure defense at the 3-point line. Michigan had a tough time figuring it out, and allowed Syracuse to cut the deficit to just three points with just under eight minutes left in the game. However, the Wolverines were able to score five straight points to preserve the lead and give themselves an oh-so-important cushion heading into the game’s final minutes. Trey Burke gets to the basket through curling around a Mitch McGary screen, eventually gathering his own offensive rebound and getting fouled, making one of two free throws. Burke again gets to the middle of the zone through dribble penetration, working his way around Michael Carter-Williams for a floater. It misses, but Glenn Robinson III is there for the key tip-in. After that, McGary hits another one of those elbow jumpers to put Michigan up by eight points. Every basket would prove crucial for Michigan down the stretch, as the Wolverines didn’t hit another field goal in the final 3:54 until Jordan Morgan’s late dunk.

Syracuse hit 21 percent of its 3-point attempts on Saturday, but it got one make that could have easily changed the outcome of the game. James Southerland, coming off a double screen, launched from deep and filled, cutting Michigan’s slim four-point lead to just one with about half a minute to play. After a couple one-for-two trips to the free throw line by Trey Burke and Jon Horford, Syracuse found itself down just two points with a chance to tie. Brandon Triche must have spied one of those mismatches he was talking about on Friday, matched up with Caris LeVert at the top of the key. LeVert makes Triche change direction, and the senior goes right at him. Lucky for LeVert, the Wolverines had a cagey veteran of their own waiting for Triche under the basket. Jordan Morgan saw Triche coming a mile away, slid across the lane and established position directly in his path to the basket. Triche ran him over, and Morgan had drawn the biggest charge of his life. In an ending that screamed poetic justice, Jordan Morgan — a player who’s seen his role diminish more and more as the season has worn on — sends Michigan to the championship game of the NCAA tournament with a two-handed fast break dunk to seal it.