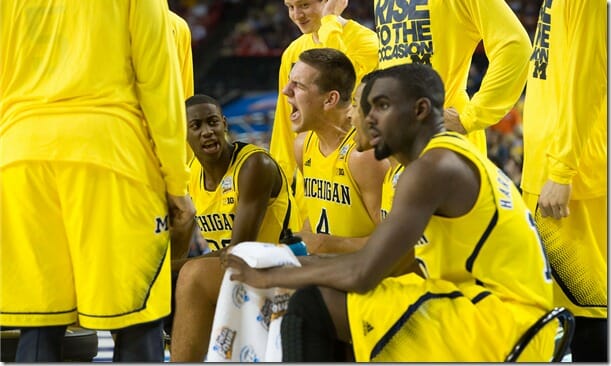 Last April, Trey Burke stood in front of reporters and announced that he was going to return to Michigan. The announcement came days after reports swirled that Burke was headed to the league after one, albeit very successful, season at Michigan.

When asked why he would return, Burke didn’t hesitate: he thought the Wolverines could win a National Championship.

Almost a year after that announcement to the day, Trey Burke is going to lead Michigan out of the tunnel into the Georgia Dome to play for a National Championship on Monday night.

It felt optimistic then, possible in December and foolish in February but now Michigan sits just 40 minutes away from the ultimate goal.

For the majority of this season, Burke has carried the Wolverines. Tonight, in the most important moment of the season, it was just the opposite. Michigan’s unflappable and consistent scorer was stopped dead by Syracuse’s 2-3 zone and his teammates – the reasons he came back to school – shouldered the weight to punch Michigan’s ticket to the National Championship Game.

This was a story of two vastly different halves – on one end of the floor. Michigan’s uncharacteristic consistency on the defensive end of the floor was what allowed it to survive a dreadful second half offensive performance against Syracuse’s zone.

Michigan carved up Syracuse in the first half to near perfection. The bench provided a massive lift and suddenly everything fell into place. Michigan was able to exploit the zone but also hit timely threes, found opportunities in transition and avoided turnovers. The Wolverines couldn’t have asked for a better start to the game, up by 11 points and clicking on all cylinders at the break.

As great as those 20 minutes were, the second half was as bad. Michigan gave the ball away on nearly a quarter of its possessions, shot 35% on twos, 29% on threes, and looked perplexed by Syracuse’s defensive look. While the Wolverines did get to the free throw line in the second half, many of the fouls were intentional down the stretch and the Wolverines went just 11-of-20 from the charity stripe for the game.

Despite the offensive ineptitude, Michigan shut down Syracuse’s offense. The Orange mustered just .93 points per trip; this was the fourth time in five NCAA tournament games the Wolverines have held an opponent below a point per possession. Michigan had done that just once in its six games leading up to the tournament.

The Wolverine defense excelled at doing everything short of slowing down CJ Fair, who finished with 22 points on 9-of-20 shooting. It was no secret that Syracuse isn’t a great shooting team and required offensive rebounding to support its offense; Michigan rebounded 70% of the Orange’s misses and allowed just nine second chance points. Syracuse went just 3-of-14 from three point range – James Southerland, the one true three point threat, finished with five points on 1-of-5 three point shooting – and managed an effective field goal percentage of 44.5%.

This day was about Michigan’s defense and its bench – two things that have been questioned steadily throughout the season. The same bench that scored just five points total during the first weekend of the tournament contributed over a third of Michigan’s production and outscored its top three scorers. Trey Burke, Nik Stauskas and Tim Hardaway Jr. combined to go just 5-of-26 from the field yet Michigan still won a game in the Final Four, that says a lot about how far this team has come.

Next up is the tournament’s No. 1 overall seed, the Louisville Cardinals. The Cardinals survived a scare from Wichita State and are five point favorites according to Ken Pomeroy, who ranks their defense first and offense fifth in adjusted points per possession.