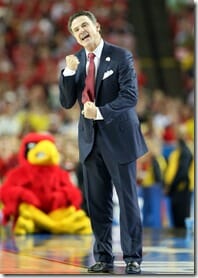 There is much about Michigan’s title game match-up with Louisville that sounds familiar, especially given what the Wolverines have faced thus far in their tourney run.

However, Louisville coach Rick Pitino says it’s time to retire that last point. Michigan may be young, he said, but they don’t play like it.

The Wolverines have seen all of their freshmen step up in big moments throughout the tournament. Spike Albrecht and Caris LeVert both had tremendous games on Saturday, and Glenn Robinson III has had an NCAA tournament much more productive than the majority of his Big Ten season.

But the freshman who has grabbed the most headlines is Mitch McGary. McGary has won the hearts and minds of many an NBA scout over the past few weeks as he’s exploded onto the national scene as a star for Michigan.

“Mitch McGary in the beginning of the year was a good player who had really good potential. Now he’s a great player, one of the premiere big guys in our country,” Pitino said. “So he’s not a freshman, doesn’t play like a freshman. Nobody on their team does.”

With all the NBA talk swirling around McGary, and Pitino being someone who worked in the NBA for years, Louisville’s coach found an NBA player to compare McGary to.

In 2005, then-West Virginia coach John Beilein and Louisville coach Rick Pitino met in an NCAA tournament game for the ages. This was the year of Kevin Pittsnogle and Mike Gansey for the Mountaineers, when Beilein rode the tremendous shooting of his West Virginia team to upsets over Wake Forest and Texas Tech and a berth in the Elite Eight.

“I remember it. I hope I’m right on the numbers.  We were down 20, like, 12 minutes into the game,” Pitino said. “Literally his son (Pat Beilein) made a three when he was in Albuquerque, New Mexico. That was, I believe, the 10th or 11th three that half, and we extended our zone.”

Despite shooting 66 percent for the game from long range, the Mountaineers allowed the Cardinals back in the game after Louisville decided to abandon its zone and move to a man-to-man, pressing attack.

“I said, guys, I’m sorry to say this, we can’t beat ’em playing zone.  We have got to press, play all man,” Pitino said. “We spent our 12 minutes in the locker room clearing the chairs. They ran more of a Princeton offense back then, going through the back cuts. I said, I know we got seven guys, you’re going to have to press. We cut it to 12 at the half. We wound up winning it in overtime.”

While John Beilein did lose that game in overtime, it was a match-up that left Pitino with a deep respect for the coach, both the way he operates in games and the way he runs his program.

Pitino almost ended up at Michigan in 2001

This is a story that’s known to most longtime Michigan basketball fans, but Rick Pitino was about as close as it gets to being Michigan’s coach in 2001, succeeding former Michigan coach Brian Ellerbe. Pitino gave a particularly vivid retelling of the process that led to him turning down the job on Sunday.

Pitino had already signed all of the paperwork and was ready to phone in and accept the job. But his wife disagreed with his decision. Vehemently.

“She had a book. That was an expression in the book that, I’d rather live one day as a lion than a thousand as a lamb. She didn’t want to go to Michigan because I’ve never visited there, I didn’t know anybody there. She wanted to go back to Kentucky where she saw the family so happy for eight years,” Pitino said. “I said to her, ‘You don’t understand, the Kentucky coach can’t coach at Louisville.’ You’re just not getting it. … We don’t want to do that.  We’ll be miserable. You don’t want to put yourself in that situation.

“She said, ‘You know what, that line you’re always using, I’d rather live one day as a lion than a thousand as a lamb, you’re an F‑ing Lamb,’ then walked downstairs.”

This exchange effectively changed Pitino’s mind, and he got on the phone to call Bill Martin, Michigan’s athletic director at the time. Unfortunately, Martin was playing squash at the time of the call and demanded he not be interrupted unless it was a life-or-death situation.

“So now I’m leaving this long voice mail. I rambled on saying it’s one of the greatest jobs in the world, but I have to go back home where my family grew up, my children grew up.  I gave a long‑winded story. Never till the NIT when I got a chance to speak to him in person about it. I went to Louisville. It was the right move not necessarily for me.  But it was the right move for my family.”