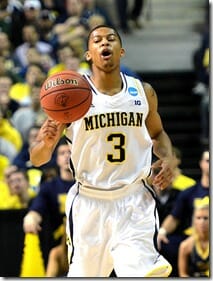 Trey Burke was awarded yet another Player of Year honor as the Naismith Player of the Year was announced at the NABC Guardians of the Game Awards Show on Sunday evening.

Burke was also the AP and USBWA Oscar Robertson Player of the Year awards in Atlanta this weekend.

Burke averaged 18.8 points, 6.8 assists, 3.1 rebounds, 1.6 steals and just 2.2 turnovers per game during his sophomore season while leading Michigan to its first National Championship appearance since 1993.

The Michigan point guard was also named player of the year in the Big Ten and given Bob Cousy award for the nation’s best point guard. He’s a consensus All-American, Michigan’s fifth in school history, with first team honors from the John R. Wooden All-America Team, the Associated Press, the NABC, the USBWA, the Lute Olson All-America team, the Sporting News, Sports Illustrated and CBSSports.com.