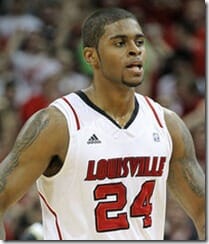 Louisville, the tournament’s No. 1 overall seed, will be Michigan’s most difficult test yet. The Cardinals have won 15 straight games and are playing great basketball, despite losing Kevin Ware to a tragic injury in the Elite Eight. Here are four keys for Michigan to upset Louisville on Monday night.

The morning before Michigan’s NCAA tournament opener I published a piece examining the Wolverines’ struggles leading up to the tournament. One of the major takeaways was that Michigan’s defensive rebounding had went from great to awful in a hurry. The Wolverines were giving up second chances in bunches and it was killing any hope of a good defense – or a transition offense.

The message was received.

How good is that? Extrapolated over a season it would rank first nationally in Division I. How big of an improvement is it? In Big Ten play McGary’s defensive rebounding percentage was just 17.2%.

McGary and Michigan will have one more test on the defensive glass as Louisville boasts an offensive rebounding attack ranked 17th nationally.

Don’t turn it over, attack

The Cardinals surrendered a point per possession or more in two of those three recent low forced turnover games – against good not great offenses. Turnovers are important to Louisville’s defense regardless of how well its offense is playing.

Michigan was masterful attacking VCU after the breaking the press two weeks ago at the Palace and while Louisville’s defense is much better in possessions where it doesn’t force a turnover, there will still be opportunities to exploit the Cardinals’ pressure defense. Michigan isn’t going to win this game with an average offensive performance, if the Wolverines are going to go out on top its going to take one of their best offensive games of the season.

Who does Michigan have to worry about forcing turnovers? Luke Winn’s chart tells the story.

Louisville’s dribble penetration goes beyond just easier shots, the Cardinals are also a better offensive team when they get to the free throw line. Russ Smith, Chane Behanan and Gorgui Dieng are all great at drawing fouls and getting to the free throw line. Michigan allows fewer free throws than any team in the country and its defensive recipe relies on not giving away free points.

It’s no secret that Michigan loves the ball screen. The Wolverines run a ball screen on 23% of their offensive possessions and are the most efficient ball screen offense at the major conference level. Trey Burke’s rise from borderline top 100 recruit to National Player of the Year is due to his ability to score and create in ball screen situations.

The bad news for Michigan is that Louisville does a great job of defending ball screens. The good news is that Michigan has seen great ball screen offenses before. Michigan has faced the the other four in the top five and survived with a 4-1 record.

John Beilein made it clear that Trey Burke still played a big game on Saturday despite a poor shooting night – and Burke definitely made a lot of plays – but Michigan will need Burke to be at his best against the Cardinals if it wants to cut down the nets. Achieving that feat will require Burke to crack Louisville’s ball screen defense.

Chane Behanan isn’t the most efficient player in the Louisville rotation. He’s not the most productive and he’s not the highest volume shooter of the bunch. His matchup with Glenn Robinson III might just be the most important.

Robinson has struggled at times defending stronger power forwards or combo forwards. Deshaun Thomas, CJ Fair, Kevin Young and CJ Leslie are just a few players that have exploited these mismatches over the year. Robinson needs to hold his own against the stronger Behanan on the block.

Michigan also struggles to defend fours because it usually switches every screen at the one through four positions. Can the Wolverines afford to do this against Louisville? Tim Hardaway Jr. could handle being switched onto Behanan but Burke and Stauskas would obviously be a problem.