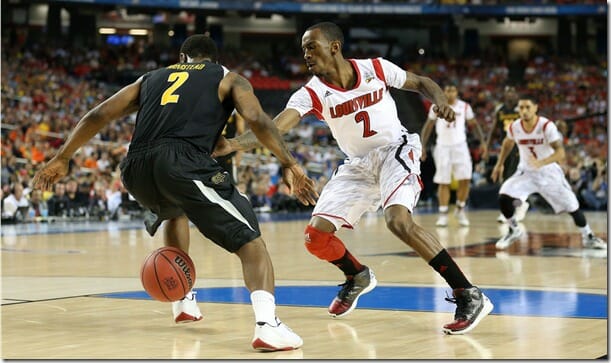 Michigan has seen its fair share of championship caliber coaches and elite defensive units during its run to the National Championship Game. John Beilein’s Wolverines have topped Shaka Smart, Bill Self, Billy Donovan ad Jim Boeheim in succession. They’ve managed to beat the 3rd, 5th and 6th best defenses in the country along with the defense that forces more turnovers than any other school in Division I. It’s only fitting that the Wolverines will see more of the same in Monday’s title game.

Louisville entered the tournament as the prohibitive favorite and has handled business with relative ease. The Cardinals have gotten this far without breaking much of a sweat after coasting by North Carolina A&T, Colorado State, Oregon and Duke before surviving a scare against Wichita State on Saturday evening. The Cardinals are No. 1 in the country by just about everyone keeping track: both polls, Ken Pomeroy’s ratings, Sagarin ratings, and most major power rankings.

Louisville-Michigan is a battle of the country’s best offense against the best defense. The Cardinals rank 1st in adjusted defensive efficiency, for the second consecutive year, at .82 points per possession. For Louisville, everything on the defensive end of the floor starts with the turnover. The Cardinals force more turnovers than any school other than VCU; Louisville opponents give the ball away on 27% of their trips down the floor. Once again that matchup is intriguing because after 38 games Michigan turns the ball over less often than every other Division I team.

The difference between Louisville and VCU is that the Cardinals have a more well rounded defense. Louisville opponents shoot just 43% on twos and 31% on threes. The notable weakness on the defensive side of the ball is on the glass, the Cardinals rebound just 67% of their opponents’ misses which ranks 242nd nationally.

The Cardinals have a reputation of being a great defense with a subpar offense but they rank fifth nationally in offensive efficiency. Despite that reputation, Louisville’s offense has arguably been better than its defense in the NCAA tournament.

The Cardinals are scoring 1.20 points per possession in tournament games and allowing .92. For comparison, Michigan’s offense is manufacturing 1.13 points per trip and allowing .93. Both teams have advanced this far in the tournament because their so called weaker halves are producing at an opportune time.

Louisville’s offense is similar to Syracuse statistically in the sense that the Cardinals aren’t great at much other than offensive rebounding. Louisville rebounds 38% of its missed shots (17th nationally) and ranks somewhere between 50 and 100 in the other three factors. Louisville isn’t a great shooting team as its eFG% ranks 92nd nationally at 50.5%. The Cardinals shoot 32.9% from long distance (216th) and a more impressive 51% inside the arc.

Russ Smith uses nearly 32% of Louisville’s offensive possessions, making him the highest usage player in a major conference. Smith’s shooting numbers aren’t spectacular, he shoots 47% on twos and 33% on threes, but he draws fouls as well as anyone in the country. Smith draws 6.8 fouls per 40 minutes (16th nationally) and attempts 50 free throws per 100 field goal attempts. The 6-foot, 165 pound guard doesn’t look like a prototypical slasher but his ability to put the ball on the deck and attack the rim is unparalleled.

Smith’s backcourt mate, Peyton Siva, is a great passer and average scorer. Siva’s half court scoring, .753 points per possession used, ranks in the 42nd percentile by Synergy Sports and his transition scoring, .978 points per possession used, ranks in the 39th percentile. Incorporate assists and the numbers skyrocket to 1.31 points per half court possession, 93rd percentile, and 1.60 points per transition possession, 90th percentile. The majority of Siva’s offense comes via the ball screen, where he uses 41% of his offensive possessions. Siva is best when he can hit the roll man, and Dieng is a great finisher when he gets the ball, but he struggles to score in ball screens. Michigan should go under screens and force Siva to beat that strategy by knocking down jump shots. Siva is a 30% three point shooter on the season and is just 1 of his last 17 from long range including an 0-for-5 performance on Saturday.

Louisville should be a difficult guard for Michigan at the four position. The Wolverines have struggled to defend the four position all season long, most recently against Syracuse’s CJ Fair. Louisville relies on a scrawny pair of 6-foot guards in the backcourt and a sky scraper in the middle, but also has a strong, physical option at the combo forward in 6-foot-6, 250 pound Chane Behanan. The Cardinals don’t post up often but Behanan is their most effective player on the low block and is likely to try and exploit that matchup against Glenn Robinson III.  Behanan is an aggressive offensive rebounder and gets to the line often but is just a 54% free throw shooter.

Wayne Blackshear adds more strength at the wing, measuring in at 6-foot-5, 230 pounds. Blackshear starts at the three but  Luke Hancock actually plays more minutes. The majority of Blackshear’s offensive possessions are spot up from the wing and over half his attempts are from long range despite just a 32% three point percentage.

Luke Hancock went all Nik Stauskas on Saturday evening, scoring 20 points on 6-of-9 (3-5 3pt) shooting with a pair of assists.The 6-foot-6 guard attempts 70% of his shots from long range but looked surprisingly adept at slashing to the basket against Wichita State. His three point prowess should still be first on the scouting report, at 37% he’s the only Cardinal that shoots better than 33% from long range.

Gorgui Dieng is a 6-foot-11 shot blocking, stealing and rebounding machine. He’s a good finisher on cuts, rolls and offensive rebounds but he’s not a back to the basket player. On 61 post up opportunities this year, Dieng has managed .557 points per opportunities which ranks in the 14th percentile nationally. The key for McGary will be the avoid fouls – Dieng shoots 49 free throws per 100 attempts – and use his size to keep Dieng off of the offensive glass.

Montrezl Harrell backs up the four and Stephan Van Treese backs up the five while walk on guard Tim Henderson also played 10 minutes against Wichita State due to Kevin Ware’s injury and knocked down two critical threes.

Harrell is a shot blocker and offensive rebounder that can finish at the rim (58%). According to Synergy Sports, a whopping 75% of his used possessions come on cuts to the basket, put backs or transition opportunities and he’s scored just eight points on 20 post up opportunities this season.

Ken Pomeroy’s projections like Louisville by a final score of 71-66 in a 66 possession game. Pomeroy’s metrics give Michigan just a 32% chance at finishing the season with a win but that’s a far cry from their title chances three weeks ago, or last week against Kansas with four minutes to play. Michigan is at the finish line and its best 40 minute performance will bring home the program’s first national title since 1989.