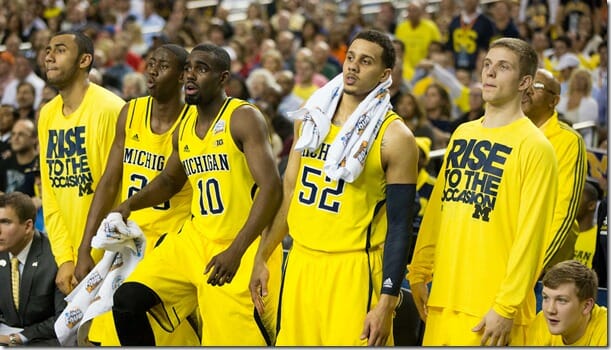 Michigan will play for a National Championship tonight as it faces Louisville (9:21 p.m., CBS) at the Georgia Dome. Louisville is a four point favorite at most sports books but we’ve rounded up a handful of predictions, opinions and analysis on tonight’s game.

But this notion that Pitino’s team needs to force turnovers in order to win is one of the most persistent yet groundless myths I’ve run across in some time. It’s gone viral, despite having little to no basis in fact.

Louisville played 198 possessions of basketball against Oregon, Duke and Wichita State, and those teams gave the ball away on just 18 percent of their possessions. Yet the Cardinals still managed to score 1.18 points per trip over those same three games. If this offense depends on turnovers from the other team, it sure has a funny way of showing it. We have now seen Louisville play three consecutive games in which opponents did not commit many turnovers, and the Cardinals are still standing. Pitino’s team does not need to force turnovers in order to score.

More from the experts and pundits after the jump.

Andy Glockner picks Michigan in his preview for Sports Illustrated:

Neither team played well Saturday, but the Wolverines look like they’re the team with more options at this point. If the Cardinals can’t create turnovers (like most of the game against Wichita State), their offense can look extremely average for long stretches. Michigan’s defense has been much improved in the tournament and Trey Burke and Co. should be comfortable enough with the ball not to feed the Louisville Machine and enable them to keep pressing their advantage.

I had Louisville as my pick before the tournament (like many others), but based on the matchup, I’m going to flip. Michigan is a modest underdog according to Vegas, but take the Wolverines to claim their first national championship since 1989.

Gary Parrish writes that Michigan-Louisville is worth getting excited about:

There was a time — and I just described that time in the first paragraph of this column — when the idea that Pitino and Beilein would march Louisville and Michigan through March and into April seemed improbable. Hell, I couldn’t have told you for certain four years ago that either would still have his same job in 2013. But the two 60-year-old men will now face each other, late Monday inside this Georgia Dome, with a national championship at stake, and legacies, to some extent, will undeniably be on the line. Pitino has a chance to become the first Division I basketball coach to win titles at different schools while Beilein has an opportunity to prove there’s still room in coaching for, you know, actual coaches in the traditional sense, guys who X-and-O their way up the ranks rather than climb because they’ve figured out how to connect to prospects in a pure or not-so-pure way.

Eamonn Brennan talks keys and focuses on Michigan’s ability to keep Louisville out of the lane:

Wichita State cracked the code. They played under every screen. They over-sank into the lane, building a defensive stronghold from the inside out. They rebounded well, preventing second chances and tip-returns to the perimeter, where they’d be stuck scrambling to close out in odd-man situations. And they basically begged Louisville to shoot. For most of the game, particularly in the first half, this worked perfectly: Siva and Smith probed and probed and couldn’t crack the Shockers’ shell, and so the Cardinals were forced to settle for one bad shot after another.

On Saturday night, Pitino said Wichita State was the best lane-defending team they’d played all season, which would seem to suggest he doesn’t think Michigan can replicate Gregg Marshall’s strategy. But what if they can?

Sports on Earth’s Matt Brown picks Michigan, here’s an excerpt of why he likes the Wolverines:

McGary’s meteoric rise has been welcomed by a team that has always loved outside shots under John Beilein. However, this is still a guard-oriented squad, and that’s a good thing for Monday night because the Wolverines are as well-equipped to handle Louisville’s relentless pressure as any team in the country. Michigan has the best offensive turnover percentage in the nation, and in their 78-53 win over VCU (which owns the nation’s best defensive turnover percentage), the Wolverines had 12 turnovers but shot 62.5 percent from the field to win going away.

Louisville is a better all-around defensive team than VCU, but if the Cardinals struggle to force turnovers, they lose chances at their best offense: scoring in transition behind Smith and Siva. And if Michigan does a reasonably good job protecting the ball, it’s highly unlikely that Burke and Nik Stauskas are going to shoot as poorly as they did against the Orange.

Here’s at great look back at Trey Burke’s brilliance in Michigan’s comeback against Kansas from KUSports.com for those that enjoy the Xs and Os of magic. The conclusion is tough to argue:

The final takeaway? Though KU could have won the game by making one of a few critical plays, this also was a lot about Burke making big plays at the right times.

After KU held him scoreless in the first half, Burke found a way to make the Jayhawks pay for numerous small mistakes down the stretch — mistakes that might not have cost KU the game against any other guard in America.

After months of acclimation and adjustment, the playbook is more digestible now. Cuts, ball screens and spacing make more sense, too.

McGary’s evolution, however, is still surprising because he’s seemingly grasped every basketball tenet coaches preach to young big men during the most significant chapter of the season.

That’s why the tape from the first four months of the season might be meaningless for Pitino as he prepares his team to deal with the player who has transformed Michigan into a more balanced squad and a national championship contender. Opponents always had backcourt dilemmas whenever they faced the Wolverines (see: Trey Burke and Tim Hardaway Jr.).
But McGary’s late maturation has turned John Beilein’s program into a more ferocious threat, especially inside.

Five of five ESPN writers pick Louisville while Gregg Doyel is the only CBS expert to pick Michigan.

Michigan has the country’s most beautiful offense, though Louisville’s pressure can turn your offense into a puddle of turnovers. But minus injured Kevin Ware, Louisville doesn’t have the manpower to turn up the heat for 40 minutes. Will Michigan score enough to prevent the Cardinals from rallying as they did vs. Wichita State? No idea, and no idea how hard Louisville pushes. Want me to take a stand? OK. Louisville’s inability to play its game for 40 minutes gives Michigan just enough room.