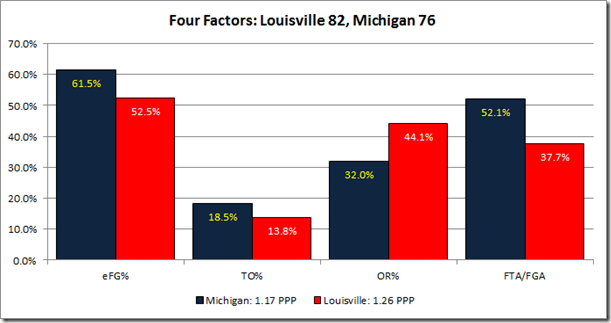 Michigan’s season was always going to end like this. The ending just came two weeks later than anyone expected.

The Wolverines magical run through the NCAA tournament was rooted in improvement on the defensive end of the floor. Michigan suddenly was able to contest a few more shots and grab a lot more defensive rebounds and the wins followed. For about 15 minutes, the Wolverines kept it up in Monday’s championship game, bursting out to a 12 point first half lead with their best player strapped to the bench with two fouls.

But down the stretch those ugly habits returned in a nasty way. Michigan’s defense ran out of steam.  It wasn’t Louisville’s highly touted turnover forcing defense that did the Wolverines in, it was Michigan’s inability to stop the Cardinals. Louisville would outscore Michigan 59-41 over the game’s final 23 minutes and change and walk out of the Georgia Dome as champions.

Michigan’s special season ended on a sour note not because of a new shortcoming but because it reverted to its old self.

Michigan shot the tar out of the ball, didn’t turn it over against Louisville’s pressure and got to the free throw as effectively as it has all season. The Wolverine offense went out with its guns blazing, scoring 1.17 points per possession against a Louisville defense that hadn’t surrendered more than 1.11 points per trip in its first 39 games.

Trey Burke went out like only Trey Burke could. Michigan’s All-American, Player of the Year, superstar scored 24 points on 11 shots in 26 minutes — while fighting through countless injuries and fatigue after playing more minutes than any player in Michigan history. Meanwhile Spike Albrecht played like no one imagined Spike Albrecht could. Albrecht scored 17 points on 6-of-7 (4-4 3pt) shooting in the first half alone in what has to be one of the most outrageous performances from an unheralded reserve in the NCAA Championship history.

But this loss was about Michigan’s defense.

The defensive improvement and dominance on the defense glass was gone. Time had run out on the Wolverines and Louisville gouged the Wolverines with the high ball screen repeatedly. Luke Hancock’s hot shooting earned him the headlines – and the MOP award – but Peyton Siva was Louisville’s true hero. Siva finished with finishing with 18 points, five assists and four steals and controlled the second half. When the final horn, confetti and explosives cleared, Michigan had surrendered 1.26 points per possession; its worst defensive performance of the season.

On Selection Sunday, the only people that believed Michigan had the mettle to make a run to the championship game were inside the Wolverine locker room. Down late against Kansas the only group that believed in a comeback was huddled up on the sideline. The youngest team in the NCAA tournament took its fair share of lumps this season but always battled back. This was an incredible tournament run and the brilliant, but disappointing, championship game was a fitting end to the best Michigan basketball season in two decades.

Michigan came painfully close to the ultimate goal but the bottom line is that this program is back. A Michigan basketball program that only dreamed of making the NCAA tournament when John Beilein took over in 2007 is now competing for championships. Two years ago that was still rhetoric, now its reality.