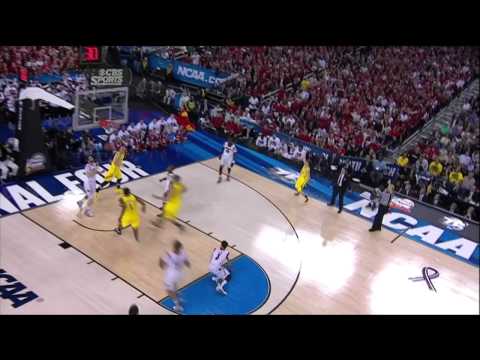 1) Spike Albrecht catches fire in the first half

The final Five Key plays of the season document a stunning game with a bitter finish for Michigan. Perhaps most stunning was the dominance of Spike Albrecht over the course of the first half. When Trey Burke picked up his second foul of the half with about 11 minutes to go until the break, Albrecht got up from the bench knowing he’d be the one finishing out the period. As has been the case all season, Albrecht did much more than simply hold down the fort — he commanded it. The Crown Point native played by far the best game of his career, hitting three 3-pointers and stretching Michigan’s lead — three of them can be found in the clip above. His first three comes against what looks like a matchup 2-3 zone. Albrecht cuts through from the top to the wing, and Chane Behanan is so preoccupied with the screen-and-roll action between Mitch McGary and Tim Hardaway Jr. that he loses track of Albrecht, who nails it. The freshman hits his next 3-pointer on the fast break — a go-to of Michigan’s offense, with Nik Stauskas usually being the beneficiary — off a great find from Hardaway. On the third play of this sequence, we can see a lot of attention being paid to Trey Burke as Russ Smith and Peyton Siva are both all over him, but Albrecht is once again left wide open for the REALLY long range shot. By the end of Spike’s 3-point barrage, Michigan was up by 10 points. The Wolverines would push it to 12 before what happens next.

2) Luke Hancock responds with four 3-pointers of his own

Luke Hancock’s Most Outstanding Player award was well-earned. The junior saved Louisville from a blowout and completely turned the game. After the game, several Michigan players referenced these four 3-pointers Hancock made in the final three and a half minutes of the first half as effective and deflating. What makes Hancock so effective is sort of the same thing that makes Nik Stauskas so effective: they’re both tall (6-foot-6), neither get much elevation on their shots, but both have lightening-quick releases that allow them to get their shots off in tough spots. The game plan for the Cardinals was intentional: get Hancock some space to shoot: they essentially ran him through screens, and Michigan couldn’t seem to get a hand up in time. First play: handoff from Gorgui Dieng; second play: same thing, and Michigan played it a lot better; third play: Hancock trails the fast break and gets a dumpoff from Peyton Siva. The fourth play was the only defensive breakdown — after a guy has hit three shots in a row, you just can’t leave him. That’s what Jordan Morgan does, and that’s more than enough space for Hancock to launch. The significance of these shots can’t be overstated. Instead of going into halftime with a double-digit lead, Michigan ended the half with just a one-point lead — which came close to a one-point deficit. With a double-digit lead at halftime, perhaps Michigan could have held off the scoring onslaught of the Cardinals in the second frame long enough to win. Alas.

Needing a boost to start the second half, Michigan found it in its offense. With Louisville beginning a half that would see them score at breakneck pace, Michigan needed to match — and for the first four possessions of the half, it did. Glenn Robinson III takes one dribble inside the 3-point line and gets absolutely hacked by Chance Behanan in the course of shooting; he doesn’t get the foul call, but makes the shot anyway. That’s not the kind of play Michigan fans normally see from Robinson, but it was a big one to start the second frame. After Tim Hardaway Jr. makes a free throw off a drive to the hoop, Trey Burke recognizes his defender going under the screen set by Mitch McGary. When Burke sees his defender go underneath, it’s likely he’ll pull up and shoot 10 out of 10 times. On the final play of the sequence, Peyton Siva goes underneath the screen but Gorgui Dieng hedges hard, leaving McGary wide open. Burke can’t get the ball to McGary but he can get it to Hardaway, who finds McGary under the basket for the lay-in. This stretch of offense for Michigan allowed the Wolverines to keep pace with the Cardinals, but they were going to need defense to win this game. In the end, they couldn’t really find it.

Ugh. Everyone watched this play, and everyone knows it was clean. There isn’t much to add, other than it was one of the best defensive plays that anyone made all season. All credit goes to Louisville — they beat Michigan and the Cardinals were the better team. But this play came at the 5:09 mark, with Michigan down three. Instead of getting the ball back on a likely fast break going to other way, Siva went to the line and knocked down two free throws to put Louisville up five. It was a deficit Michigan wouldn’t recover from.

5) Luke Hancock hits a three, Chane Behanan gets a putback to seal it

These were the two plays that Louisville made before Michigan had to start fouling — they effectively won the game for the Cardinals. The defensive plan on Luke Hancock’s 3-pointer was a bit disturbing. Russ Smith, who did nothing all night, drives the ball to the lane. Burke is on Hancock because of a switch. Burke helps off Hancock on the drive, and the junior ends up with an open 3-pointer when Caris LeVert can’t “help the help” in time. It’s unlikely that Burke would have even bothered Hancock because of his lack of height, but how many 3-pointers does a guy have to hit for you to know you can’t leave him open? Three points is more than two. Let Smith drive, hope your bigs can get there in time to alter his shot. On the next play in this sequence, Chane Behanan simply makes a tough, gritty, hard-nosed play to finally get the ball in the basket — while getting hacked at egregiously by Michigan, I might add, showing the poor officiating went both ways. Michigan couldn’t keep Behanan off the glass in the second half — he had seven offensive rebounds in the second half alone. This was a tough Five Key Plays to write, and it was probably tough to watch, as well. It’s too bad — it really was a great basketball game.