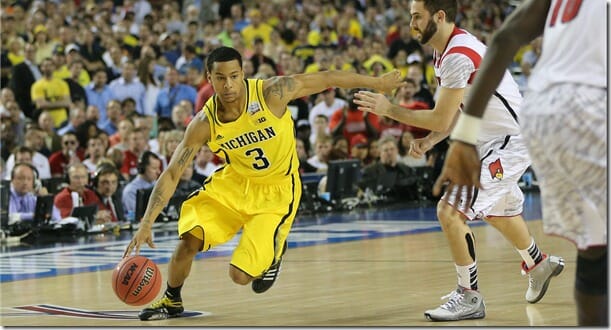 Michigan’s magical run to the NCAA tournament is over and the first piece of off season business to handle is the NBA Draft. John Beilein had the most talented roster of his career last season but having four potential first round picks comes at a cost. Trey Burke, Glenn Robinson III, Tim Hardaway Jr. and Mitch McGary all have very real NBA prospects to explore in the next month.

There are so many deadlines and dates swirling regarding the NBA Draft that we decided to run down the list and run through the basics.

The first step in the process is applying to the NBA Draft Undergraduate Advisory Committee. Submitting a name to the committee doesn’t mean a prospect is entering the draft, only that they wish to receive information from league executives regarding their status. The deadline to submit your name is April 10th (yesterday) and feedback will be delivered by April 15th. All four Michigan players with pro prospects reached out to this committee.

“We were very proactive and met with them that next morning (after the NCAA title game loss in Atlanta) before we got on the plane to come back,” Beilein said this morning on WTKA-AM (1050). “I advised them all they should all go the NBA advisory committee and see what they think, so that’s the process right now.”

The NCAA has set a “withdrawal deadline” of April 16th but the official date to declare for the NBA Draft is April 28th. The April 16th deadline is non consequential other than meaning that there will be no testing of the waters this year; players can’t enter the draft this week and return to school at the end of April.

Michigan’s four NBA prospects will have until April 28th to make their decisions, after the jump we rundown where they sit in the minds of some major draft prognosticators.

Quotable: CBS Sports on Burke: “No one’s stock rose more than Burke. Foul trouble in the championship game was the only thing that really slowed Burke down and allowed Louisville to win the title. Without Burke’s NBA-level ball-handling against the press, the Wolverines melted.

Burke has great speed and athleticism, can shoot the lights out from NBA range, and constantly responded with scores when Michigan needed it. He was the Wolverines’ go-to guy in the tournament and in the championship game, where he scored 24 points on just 11 shots. Burke has likely moved himself closer to the top 5.”

Quotable: Glenn Robinson III on Twitter: “Stressful week. So much to do/think about!””

Random NBA scout on Robinson: “”(Robinson) has the best chance to be a solid NBA player of all of them.”

Quotable: Sporting News on McGary: “The 6-foot-10 freshman’s breakthrough performance in the NCAA Tournament must have simultaneously thrilled and scared Michigan fans. With a full season of McGary dominating in the post, the Wolverines will again be one of the favorites in the Big Ten and a Final Four contender. Of course, he was so good during Michigan’s run to the championship game that making the jump to the NBA suddenly became a very real—and very lucrative—option for the talented big man.”