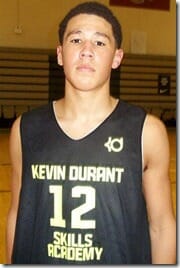 Michigan’s season ended on Monday night but recruiting season is already set to get underway. Coaches are allowed at open gyms and workouts beginning today and there are certified live AAU weekends coming up this month; April 19th-21st and April 26th-28th. The late signing period for Class of 2013 prospects also begins on April 17th.

John Beilein and his staff are in a precarious situation of recruiting for the future while trying to figure out exactly who will be on their roster next season with NBA decisions looming. Jumping head first into AAU season, we rounded up some updates and nuggets from the first weekend of AAU play regarding some notable Michigan targets.

Devin Booker is now hearing from Kentucky according to his latest blog at USA Today.

The latest school to reach out is Kentucky.

First, Coach O (Orlando Antigua) hit me up on Twitter and then Coach (Kenny) Payne gave me a call. He told me they were interested and they wanted to get down and see me. He said that they heard that I was an elite scorer in the 2014 class and that was just what they needed.

It was cool because Kentucky is obviously a powerhouse. I love that Coach (John) Calipari pushes his players really hard. That’s what I want in a coach. I’m definitely interested in them.

Coach K is supposed to be coming down here Friday for my open gym so I’m looking forward to that. I never get used to stuff like that. I’m really blessed to be in this position.

Other than that, all of the schools are still coming pretty hard. Of course Missouri is coming hard and Michigan, Florida, North Carolina and Stanford, they’re all coming hard too.

“I could really go anywhere, I just have to have that type of family feel there at the school,” said Bluiett, who averaged 27 points a game this season. “If I go to (California), I need a close relationship and a second family. So with coach Schilling being there and me and him being really close, I wouldn’t mind going that far.”

Thursday was the first day college

coaches were allowed out on the road for the April recruiting period. Butler coach Brad Stevens and assistant coach Michael Lewis attended Park Tudor’s open gym, along with assistants from Cincinnati and Northwestern.

It didn’t escape Bluiett’s notice that two of the teams that offered him, Louisville and Michigan, played for the national title on Monday.

“It was a good feeling to know those two high-major programs are coming after me,” he said. “I never really thought I’d be in this position or, to be honest, think either of those teams would make it that far. That’s not what I had on my bracket

Vince Edwards, Michigan’s third outstanding offer, had a quiet weekend in his AAU debut. Edwards made the switch from the King James Shooting Stars to All-Ohio Red this summer and will be playing on the Nike EYBL circuit. It continues to be a Purdue-Michigan race at the top for Edwards’s services. Scout.com reported that Edwards needed to “crank up his motor” and had a bit of a slow weekend to open AAU play.

Hall had a breakout performance in NLP’s win over SYF Players. Hall scored a game-high 20 points, relentlessly attacking the basket off the dribble.

Kurt Hall is getting interest from Illinois, Michigan, Michigan State, Indiana, Kansas, Texas, and Wichita State among others.

Here’s footage of the Chicago native in action:

Class of 2015 combo forward Evan Boudreaux, Hall’s AAU teammate, visited Michigan for the Indiana game and should be a hot target this summer. Boudreaux started out AAU season strong at the Swish ‘n Dish.

Boudreaux came out and dominated right from the opening tip. The sophomore scored 16 points in the first half alone, getting most of his buckets in transition and on hustle plays. Boudreaux finished with 20 points in a blowout win over the Wisconsin Starz.

Boudreaux has been Mr. Consistency in the tournament thus far. The sophomore put together two more high scoring and high rebounding games, including an 18-point performance in NLP’s win over SYF Players Saturday night. Boudreaux also had two key blocks late and the game-winning basket.

A couple other class of 2015 Illinois point guards that Michigan has been watching played well last weekend as well. First, Glynn Watson

Watson was shifty, yet under control for the 16U Wolves. With 15 points on the night, he was able to score from multiple levels, finishing in transition, driving with ease to the hoop or knocking down the mid-range floater when required.

The versatile guard played his best basketball Sunday, scoring 17 points in different fashions. He showed a great looking perimeter jump shot, used his frame well to attack the lane against defenders and score from the mid-range or at the rim and displayed hibounce with two nice dunks in transition.

Michigan also continues to recruit Jalen Brunson, a talented Illinois guard with offers from Illinois, DePaul, SMU and Xavier. Brunson blew up over the weekend and was named one of the best shooting point guards by ESPN:

Brunson is a lefty lead guard who is smart and crafty. He can push the ball and run the offense, but what makes Brunson truly a special point guard is his ability to shoot. Brunson can knock down the open 3 if the defense falls asleep. Brunson has good basketball bloodlines as he is the son of Temple great and former NBA player Rick Brunson.

The young highly-touted guard out of Illinois was astounding vs. the St. Louis Eagles. Brunson was absolutely “cold” offensively utilizing his shake to get the defenders off balance before draining three’s – five – in their faces. He also attacked the cup really well and finished in traffic. He finished with 31 points officially.