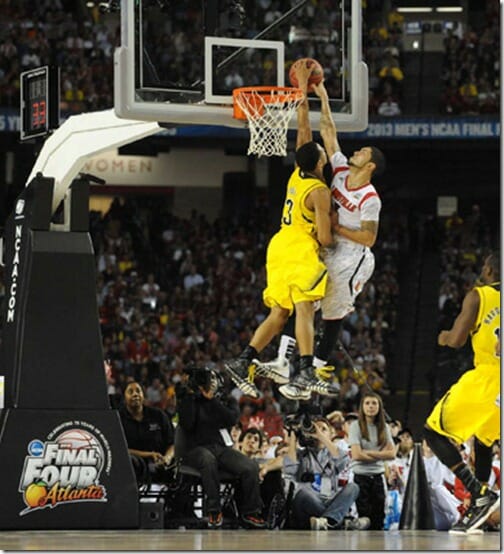 Trey Burke will be remembered as a winner. Michigan won 55 games in two years under Burke’s guidance as point guard and his resume is as littered with as statistical gems as it is game winning moments. With the news of Burke’s departure to the NBA, we took a look back at some of the defining moments of Burke’s career in chronological order.

Michigan traveled to the Maui Invitational as a virtual unknown. Who were the Wolverines without star point guard Darius Morris? How good was this team that only scored 59 points against Ferris State and only beat Western Illinois by four points?

After 20 minutes on the island, Trey Burke had made it clear that he was here to stay. His performance against Duke was impressive the next day but this block at the end of the first half – and the ensuing jawing heading to the locker room – was the first “Trey Burke” moment of his career.

Michigan cruised past Memphis and establish itself as a contender in Maui and Burke would never look back.

Trey Burke made the winning or decisive play in Michigan’s four wins over rivals Ohio State and Michigan State during his two years in Ann Arbor. This play against Michigan State was his of those moments and the only one that involved a game winning assist. Michigan fought its way to a defensive stop despite providing a painful number of second chances to the Spartans before Burke pushed the the ball in transition and delivered a drop off pass to Stu Douglass for the winning bucket.

A month later, Burke was back at it to defeat another rival. At this point Michigan was 9-4 in the league and suddenly a viable threat in the Big Ten Championship race. Hosting Ohio State with ESPN’s College GameDay in the house, Burke delivered a special performance against his childhood friend Jared Sullinger and the hometown school that didn’t recruit him. His floater over Jared Sullinger would seal the victory but he made a number of key plays down the stretch to propel the Wolverines.

This wasn’t the most important or the most heroic of any of Burke’s performances but this was, statistically speaking, his best game in a Michigan uniform against a major conference foe. Burke scored 27 points, handed out eight assists, grabbed four rebounds and snatched three steals in the 13 point win while avoiding a single turnover in his 34 minutes. Burke’s single game offensive rating was 180, the best of his career.

There were plenty of times that Trey Burke made the game look easy as a sophomore but he managed to effectively end Michigan’s Big Ten opener before most even realized it began. The Wolverines were facing a shorthanded Northwestern team but Burke scored 13 straight points to give Michigan a 16-4 lead in Evanston. The broken ankles tell the story just fine.

Burke’s third rivalry winning play came on the defensive end against a player renowned for his defensive ability. Burke was beaten by Craft for what looked to be an easy pull up jump shot to give the Buckeyes the lead in the closing seconds but he recovered quickly and blocked Craft’s shot from behind.

For a player known for his offense, Trey Burke seemed to win more games with his timely defensive abilities. That was never more apparent than in Michigan’s win over Michigan State. The Wolverines looked like they had blown the game before Burke simply took the game right out of Appling’s back pocket.

Putting the team on his back

Purdue made a tragic mistake. The Boilermakers thought it was smart to trash talk Trey Burke. With Michigan’s season floundering and down 12 points against Purdue, Burke did what he does best. He put Michigan on his back.

There’s not much more to say about the shot than what has already been written. Burke’s 30-foot three was the play of the NCAA tournament and a play that will be remembered for years to come in Ann Arbor and across the country.

The block that wasn’t

This post started with a block so it’s only fitting that it ends with a block. Even if it was unfortunately called a foul. This is the moment in Burke’s career that will always provide the what if. Michigan was down just three points and could have had an opportunity to tie the game on the other end if the block was clean. Instead Louisville extended its lead to five points and never looked back.

More importantly, Burke’s ability to block shots as a 6-foot player is symbolic of his career. He’s not big enough or athletic enough that he should be a great shot blocker but that never stopped him from stepping up and making those game changing plays with everything on the line.