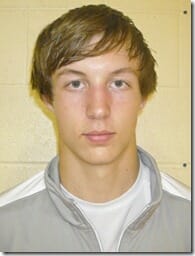 A handful of Michigan targets were on display at the Michigan Invitational over the weekend at University of Michigan Dearborn (and other local venues) including one of Michigan’s top targets in the class of 2015, wing guard Luke Kennard. UM Hoops was on hand to catch Sunday action and

Luke Kennard scored a game-high 25 points in King James’ 17U Quarterfinal loss, shooting 10-for-15 from the floor including three 3-pointers. The 6-foot-6 wing added four rebounds and scored a game-tying basket with under 10 seconds remaining before a buzzer-beating 3-pointer sent King James, which was playing up an age group, home early.

Kennard, who is drawing interest from Michigan, Michigan State, Ohio State, Indiana, North Carolina and Kentucky among others, showed improved shot selection and increased defensive tenacity. He’s got a smooth stroke and an effortless release, and can score from anywhere on the floor. He’s very good off the ball, always getting himself open, and readying himself to shoot the second he catches a pass.

Kennard is sneaky quick, and gets involved on the glass at both ends of the floor. He showed improved patience and basketball I.Q., always making the correct decision, and rarely forcing action. He is continuing to grow and fill out and has gotten better as every aspect of the game throughout his high school and AAU career.

A.J. Harris is Kennard’s backcourt mate for King James and almost stole the show from Kennard on Sunday. Harris showed impressive quickness and ball-handling skills, keeping the ball on a string and rarely forcing turnovers. He has an explosive first step and can take defenders off the ball with ease. Harris can score from all over the floor, showing a solid 3-point stroke, and also displaying an impressive ability to get the basket with an arsenal of moves.

The main knock on the 5-foot-8 point guard is his lack of size, but his smooth quickness, and incredible passing ability make up for it. He is a good floor general, who has the ability to run offense smoothly and make everyone around him a better player.

Nate Fowler is an imposing big man who has the ability to wreak havoc on both sides of the ball. He’s extremely fundamentally sound, especially on the defensive end, and has an old-school feel to his game. The 6-foot-9 big is deceivingly quick and can finish at the rim with either hand. In an offense with Harris and Kennard, you would think a big man would tend to get lost in the shuffle, but Fowler is good at having the offense run through him at times, and makes the correct decision whether take the ball down low, or kick it out to an open teammate.

Fowler needs to improve his athleticism, and develop more of an inside-out game to be able to thrive in John Beilein’s system, but as he continues to work, and get better, his ceiling is very high.

R.E.A.C.H. Legends guard Darrell Davis was the best player on the floor in his team’s 17U semifinal loss to the Michigan Warriors. Davis scored an easy 12 points, effortlessly gliding by on-ball defenders and getting to the basket. Davis could’ve taken his defender off the dribble one-on-one anytime he wanted to but he smartly stayed within the confines of his offense and made his teammates better. He’s a great passer who used his ability to put the ball on the floor and penetrate, to perfection, and often found open teammates for easy baskets.

Davis who said he prefers to play the point, spent most of the game off the ball, and moved well, getting himself in good position. He was patient when he needed to be, but also showed a lightning-quick first step and showed a devastating crossover that constantly kept defenders guessing. He is a stubborn defender, whose length tends to bother smaller guards.

Davis is hearing strong recent interest from Stanford, Maryland and Marquette; several of which may soon extend an offer. He’s also hearing from Michigan, Michigan State, Iowa State, UMass and a handful of mid-majors.

Justin Tillman is one of those players that can be held scoreless, but still make a huge impact in any game.

The 6-foot-8 power forward who plays on the same R.E.A.C.H. team as Davis, only scored six points in his team’s semifinal loss, but he posted six blocks and five rebounds, dominating the game on the defensive end. Tillman is incredibly long, has good instincts under the basket, and can jump out of the gym. He’s very athletic and runs the floor very well for a big man, but is still very raw, and has a lot of filling out to do. He moved well without the ball and was very good on the pick and roll. He can finish above the rim, but needs to improve his fundamentals down low.

Tillman needs to get stronger and improve his back-to-the-basket game, as good of a shot blocker as he is, and with the amount of potential that he has, the sky is the limit.

Aaron Foster-Smith is an athletic big who can do a lot of different things for his team on the floor. He was a big reason the Michigan Warriors escaped with a five-point win over Davis and Tillman’s R.E.A.C.H. squad.

Foster-Smith has an impressive back-to-the-basket game, but also has good handles and can step out and shoot the three with relative consistency. He’s a great defender, who stands his ground and stays in front of his opponent every trip down the floor. He is very explosive and displayed great fundamentals boxing out his man every time there was a shot.

Like Mitch McGary, Foster-Smith plays with a lot of fire and passion, and when his confidence is high, his game goes to another level, and he has the ability to take over.