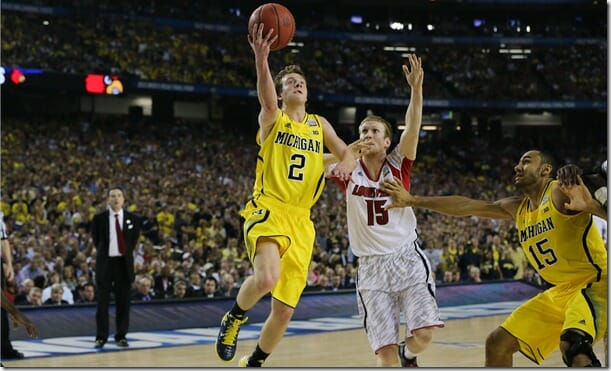 Since Michigan’s run to the NCAA national title game, there has been much speculation about what sort of effect it would have on the many high-profile high school recruits Michigan has been going after.

Not surprisingly, John Beilein said he has heard good things from the recruits he’s talked to since Michigan arrived home from Atlanta.

"I think the response has been really good, and we hit the road again this weekend for the AAU events," Beilein said prior to Michigan’s basketball banquet on Tuesday. "So, that’s going to be good just to watch the young men."

Beilein and the rest of his coaching staff will attempt to parlay Michigan’s deep NCAA tournament run into success on the recruiting trail. And now, with Trey Burke officially moving on to the NBA next season, Michigan finds itself with an extra scholarship at its disposal.

However, Beilein said he doesn’t foresee a situation that would call for using Burke’s vacated scholarship for a late signing, a la Caris LeVert or Spike Albrecht last summer.

"I don’t think we’re in a position where we have to use (Trey’s scholarship)," Beilein said. "But if there’s the right situation – last year Caris was more of a redshirt, was going to be."

The decision of whether or not Beilein will be on the lookout for an additional late add for the class of 2013 depends a lot on what happens with the Michigan players who are still considering the NBA, the coach said.

"It depends on what type of attrition we have to the NBA, that’s how we make that decision," Beilein said. "I feel really good about in 13 right now, the returning players. Whatever the number is, that’s what it is."

Michigan fans have been waiting on pins and needles since the close of the NCAA tournament for the respective decisions of Glenn Robinson III, Mitch McGary and Tim Hardaway Jr. regarding their NBA futures.

The decisions of all three prospects remain up in the air but the deadline is in sight.

"I was gone all day yesterday and I was gone all weekend, but we’ve been talking back and forth," Beilein said. "We’re getting closer to assisting everybody. Hopefully we’ll have news for you, obviously it’s going to come before the 28th."

Outside of NBA attrition, Michigan doesn’t anticipate attrition of the transfer variety after this season.

"You’re never 100 percent sure, but we feel good at this point," Beilein said. "We don’t think there’s going to be any attrition (by transfer)."

But there is one other kind of attrition that Beilein is worried about: graduation. Michigan graduates five seniors this year, and although they haven’t played much this season, Beilein has stressed their importance to the team all season long. To re-load the scout team, the coaching staff will be looking for walk-ons.

"Those five seniors, we’re going to miss those guys so much next year," Beilein said. "That’s one of our bigger concerns – how do we replace that?

"There’s always been some young men who have contacted us about walking on. We like that to either be guaranteed or through a tryout. We try to wait to see what happens here with the NBA draft decisions before we reach out and either guarantee a tryout or guarantee a position. I understand now, after all these years, how important that dynamic is. It’s huge."

Trey Burke won his second Bill Buntin MVP award; Mitch McGary won the Steve Grote Hustle Award, to the surprise of no one; the team’s Iron Man award went to Glenn Robinson III, who didn’t miss a practice all season.

But before those awards, there were a few other honors were given out.

One player who took in a haul was Matt Vogrich, who won the team’s Most Likely to Get Married Award, as well as being named a finalist by Cosmopolitan as one of the "hottest" players in the Final Four.

CJ Lee gave out his dunk of the year award to Tim Hardaway Jr., for the Miami native’s tomahawk slam against Louisville in the final — narrowly beating out Robinson’s 360 against Minnesota.

This year’s Most Likely to Succeed Award recipient should come as no surprise: future NBA first-round pick Trey Burke took it home.