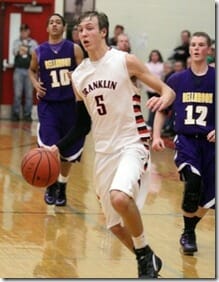 Luke Kennard is one of the top prospects on Michigan’s class of 2015 recruiting board and was in action at the Michigan Invitational over the weekend during early AAU play. UM Hoops was in attendance to watch Kennard on Sunday and caught up with him afterward to grab an update on his recruitment.

First of all can you talk about your overall thoughts on your performance today?
“It was a game of runs, I shot the ball pretty good, took it to the basket some. Our defense gave up too many points, and I think that was a key factor for the loss.”

How did your game progress during your high school season? What’s the biggest thing you improved on?
“I think I’ve improved in my defense and my quickness. That’s what my high school coach really helped me improve on this last season.”

Can you give an update on your recruitment? What schools have shown the most interest lately?
“Right now Michigan and Ohio State are probably the most that I’ve talked to. I’ve talked to Indiana a lot, West Virginia. I think I have a few scheduled workouts with some colleges here soon. I just took a recent trip to North Carolina and I talked to Louisville too.”

Any recent offers?
“Not lately, but I think my last one was Indiana.”

How often have you been talking to coaches at Michigan?
“I’ve been talking to them quite a bit and they say that when June 15th comes around, I might be getting an offer soon.”

What Michigan coaches have you been talking to the most?
“We have talked to Beilein and coach Meyer the most.”

What have Michigan coaches been telling you about your game? What they like and what they want you to work on?
“They think I’d fit in really well with their program and how they run offensively, and I think so too. They tell me where I would be, like the 2 or 3. They want me to shoot the ball and that’s what I can do.”

How do you think you’d fit in with Coach Beilein’s system if you went to Michigan?
“They do ball screens and coming off picks, and I like to play like that. I like coming off, getting open shots. I really like how they play.”

What did you think about Michigan’s run in the NCAA tournament?
“We rooted for them. We thought they could pull it off. They played to their highest potential and if they played like that I think they would be one of the best teams in the country.”

Does their recent success influence your decision at all?

“Yeah, I think it does. I’ve always said the tradition at the school would be a key factor for me going somewhere, and I think that even improved their tradition.”

Any plans for any visits in the next few weeks or months?
“I think we might try to go to Michigan State soon, and we might be going to the Michigan Team Camp. We did that the past two years. My coach always asks where we want to go, and I always say Michigan, because I always have a good time when I’m there.”

What kind of things go into making your college decision besides basketball?
“Definitely their education programs and how their education works and their staff. Michigan’s coaches make me feel right at home when I’m there, and that’s what I like.

How much is your family involved in your college decision?

“They are very involved. My parents, if my coach tells us we need to call (schools), my dad will call them and talk to them. And they always go to the visits with me. So they’re really involved.

What are your goals for AAU ball this summer? What’s the number one thing you want to work on?

“I’d like to get better at my quickness. This summer I’ll be doing a lot of agility training.”