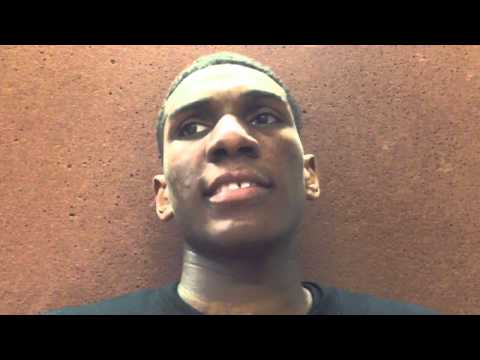 The April live evaluation period seems to have crept up quickly because Michigan was still playing meaningful basketball last week. College coaches will be back on the road this weekend traveling from one major AAU tournament to another during the first weekend of live spring evaluation. The Nike EYBL will start out in Los Angeles, Adidas AAU teams will be in Dallas, Under Armour teams in Pittsburgh with others in Minneapolis, Indiana and other gyms around the country. Michigan’s staff will have plenty to sell after a trip to the Final Four this spring, here are four storylines to follow as the live evaluation period tips off.

1. Kevon Looney is one to watch

Kevon Looney is a consensus five star and top ten recruit nationally in the class of 2014. He’s also going to be a priority for Michigan this spring and summer. In a recent video interview with ChicagoHoops.com, Looney listed Michigan first as one of the “most interesting” schools recruiting him.

There’s obviously heavy interest for the Milwaukee native. Florida had an in-home visit last week and Duke is also expected in to see him. On a podcast with NY2LA Sports, Looney reported that he’s still wide open but some schools are recruiting him harder than others.

Looney’s Milwaukee Runnin’ Rebels AAU program will tip off the season at the NY2LA Sports Spring Extravaganza in Minnesota. Footage of Looney after the jump.

Michigan has offered three prospects – Devin Booker, Trevon Bluiett, Vince Edwards – in the class of 2014. The Wolverine staff will be able to follow all three under one roof in Los Angeles this weekend as the Nike EYBL tips off. Booker with the Alabama Challenge, Bluiett with Spiece Indy Heat and Vince Edwards with All Ohio Red.

Pay close watch to all three players’ performances and how diligently the Wolverines are following. Michigan was at nearly every game Devin Booker played on the circuit last year if it wasn’t at every game and the five star scoring guard remains a Michigan priority. Booker is drawing interest from almost every top high major school but Michigan has been recruiting him the longest and will be involved in his recruitment until the end. Bluiett recently added an offer from UCLA, where his high school coach was hired as an assistant, while Edwards is down to a final two of Michigan and Purdue after visiting Ann Arbor in March.

The two names other than Kevon Looney that could be eyeing scholarship offers are AJ Turner and Kameron Chatman.

Turner emerged throughout the high school season with De La Salle and is being watched carefully by both in-state schools. He reportedly ($) played well at the Up North Challenge. You can watch the 6-foot-6 wing in action here. Another reason that schools will be keeping a close eye on his Dorian’s Pride squad? 2016 standout Justin Jackson is running the opposite wing.

If Turner is in the evaluation stage, Kameron Chatman is in the need to visit – and desperate to play – stage. Chatman is a top 50 prospect with Michigan in his top eight, he was also ineligible to play prep basketball this year after issues with his transfer to Poly. Chatman will play on the Nike EYBL circuit with ICP Elite

Derrick Walton has next and Spike Albrecht will be around for the next three years but the class of 2015 is a point guard year for John Beilein and the Wolverines. Beilein has taken a point guard in every other year during his last few in Ann Arbor. Darius Morris in 2009, Trey Burke in 2011 and Derrick Walton in 2013. The only issue with Beilein’s strategy is that Morris and Burke entered the NBA Draft after just two seasons.

Michigan is in line to go after another point guard in the class of 2015 and there are a number of prime candidates.

Sedrick Barefield is one of those prime candidates. The California native has emerged as one of, if not the very best point guards on the west coast. He impressed the Arizona Rivals affiliate with his early season play:

If, like baseball, the game of basketball had its own version of a five-tool player, Barefield would be it. The 6-foot-2, class of 2015 point guard was at the top of his game on Saturday morning.

The four-star recruit got to the basket and scored at will. Barefield used a debilitating array of handles to blow by each defender in his way. He’ll start with an electric cross-over, then put his defender in a spin-cycle, and finally puts a bow on the package with a slow-motion-like stop and go hesitation move. The result? Either a basket for him or for a teammate.

Barefield is also a dynamic passer with 20/20 court vision. Rather than start the fast break with multiple dribbles, Barefield moves the ball up the floor with the pass. If he’s ever caught in traffic in the paint, he won’t force a bad shot, but rather make a pass to a teammate that nobody else thought was possible.

And Michigan has made an impact:

After his second game of the day, Barefield told media members that Michigan is “coming on strong,” and if the Wolverines’ coaching staff is hoping Barefield could become Trey Burke-esque, they might be on the trail of the right guy, but that’s still a long ways away.

John Beilein checked in on Barefield last week when he was in California with Trey Burke and has clearly prioritized the youngest.  Look for Michigan to pay close attention to the dynamic point guard beginning this week in Dallas with his Compton Magic squad.

While the Wolverines are tracking Barefield in Dallas, they’ll also be following a pair of 2015 guards they’ve been tracking for quite some time: Hyron Edwards and Jalen Coleman. Coleman joined forces with Edwards (and Chandler White) this year, making the switch from Spiece to Indiana Elite. According to the Black Hammer, both players played well at Indy Ball last weekend:

Edwards showed out in his first game of the weekend with a breakaway dunk and continued on with some high level playmaking ability. When he gets out in transition, Hyron showed a good ability to either finish or set his teammates up for some easy points. Edwards is hearing from Purdue, Illinois, Michigan, Michigan State, Indiana, and Kansas.

Playing with the loaded Indiana Elite 2015 team, Coleman found his place and role. Displaying an improved outside shot, Coleman was able to leave his mark on games. He is long and lanky and can slice right through the defense on his way to the basket. Coleman has proven himself to be the top player in the state for 2015.