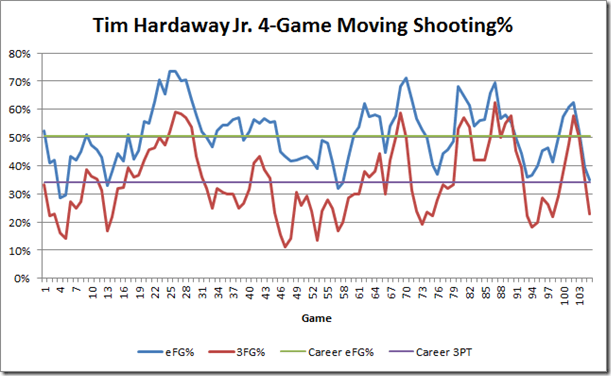 It’s usually easy to draw conclusions about a player’s career when they move on. Zack Novak will always be remembered for his leadership. Trey Burke will be remembered for perfecting the point guard position as a sophomore. But it’s tough to decipher how Tim Hardaway Jr. should be remembered after his three year career in Ann Arbor. It’s tough because perception of Hardaway changed with each passing moment as his performance varied wildly over three seasons.

Looking at the big picture, Hardaway had an extremely impressive career. It was his offensive explosion in February and March of 2011 that carried Michigan to the NCAA tournament during his freshman season. Hardaway started every game (other than missing this year’s CMU game with an injury) in three years and the Wolverines made the NCAA tournament every season. He averaged 13.9 points or better each year and was a critical player on Michigan’s first Big Ten Championship and first Final Four teams in decades. Tim Hardaway Jr. is an undeniably critical piece of Michigan’s resurgence.

Despite all of that, there’s still an essence of disappointment or at least a wandering thought about what could have been as Tim Hardaway Jr.’s career comes to a close. The wavering stems from the 6-foot-6 forward’s inability to discover consistency over his career.

Hardaway was dominant when he was on. He won handfuls of game almost single handily during his three seasons. But his inconsistency was painfully evident, both on a yearly and nightly basis. He found his stride as a freshman only to regress into a yearlong slump as a sophomore. As a junior, Hardaway was as likely to dominate a game as he was to disappear completely.

Hardaway’s inconsistency is painfully evident in this chart of his shooting statistics throughout his 107 game career. The chart shows a 4-game moving average of his effective field goal and three point shooting numbers. His career averages are also designated.

The first two years illustrate his late rise in his freshman season and his poor sophomore season. The final third of the graph shows a strikingly inconsistent junior season quite clearly. No shooter is perfectly consistent but Hardaway’s streakiness was both his strongest asset and his biggest weakness.

Despite the inconsistency, Tim had his moments. He strung together a ridiculous stretch of play as a freshman to carry Michigan to the NCAA tournament – including this shot which punched Michigan’s bid – that featured seemingly endless scoring bursts like this.

As badly as he played at the Breslin Center over his career, he left Michigan with a winning record (4-2) against Michigan State. During his freshman season, he beat the Spartans almost by himself with a massive second half performance.

He put together a special performance against Michigan’s rival to the south as a junior, keeping the Wolverines alive against the Buckeyes and allowing them to prevail in overtime.

He scored 20 points or more in 19 of his 107 games and the Wolverines were 17-2 in those contests. He was also critical in helping Michigan out of the first weekend of the NCAA tournament with timely shooting against VCU and South Dakota State.

The frustration is inevitable but the end product is undeniable. Tim Hardaway Jr. had a successful career in a Michigan jersey.

Many will argue that he made the wrong decision to turn pro – and we won’t have a good answer to that question for quite some time – as he’s not projected as a first round pick by most scouts and analysts. Truth be told, I have a hard time arguing with the decision.

Hardaway improved almost every aspect of his game over last year. His ball handling, shooting and rebounding were all better than a year ago and Michigan reached the national championship game. He’s still not regarded as a top pick and that’s unlikely to change with another year at Michigan.

Hardaway’s options this spring were. 1) return to school and manage to string together another 30+ games of consistent and improved basketball. 2) head to NBA draft camps and string together a month of hot shooting and good workouts and rise up the draft board. Given his track record, option two is a lot more likely to yield results.

Tim Hardaway Jr. won a lot of games in a Michigan uniform. He’s also never going to have a better shot to chase his NBA dream. For that, who can blame him for making the jump?