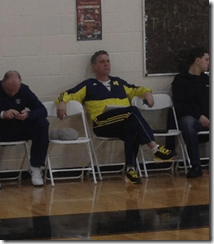 Michigan had a heavy presence at the Nike EYBL event in Los Angeles but Wolverine coaches were also out recruiting across the country as well. Here’s a look at Michigan prospects outside of the EYBL who had big weekends.

The King James Shooting Stars 16U team is one that Michigan fans should be familiar with. 2015 wing Luke Kennard headlines a team featuring 2016 phenom VJ King, 2015 point guard AJ Harris and 2015 big man Nate Fowler – all prospects on the Michigan radar.

The Shooting Stars were in action at the Spring Fling in New Jersey competing for a coveted guaranteed bid to the Nike Peach Jam in July. King James took home one of the two automatic bids by winning the event.

Kennard wasn’t short of impressive play, with one in attendance saying he should be MVP.

Luke Kennard in my opinion was the M.V.P. of the weekend. He was unconscious from the three point line.

Michigan also had a presence in Dallas where a number of Wolverine targets were in action. The Wolverines were on hand in Dallas Sunday for both the semifinals and finals keeping track of Stephen Zimmerman along with Arizona, USC and Miami. Zimmerman impressed 247 Sports’ Jerry Meyer with his play:

Stephen Zimmerman is establishing himself as one of the top post players in the 2014 class. At 7-0, 215-pounds, he has tremendous length but is also highly skilled. The lefty is a good shooter with developing range and is comfortable with the ball as a handler and passer. With time he should be come a more physical presence around the basket as a defender and rebounder. UCLA, Arizona and UNLV are vigorously pursuing Zimmmerman. Kansas, UConn, Oregon and Memphis have also offered and are in the hunt. Michigan is trying to persuade him to visit and is waiting to offer until then.

Zimmerman plays on the same AAU team as 2016 superstar point guard Derryck Thornton, one of the most promising young point guards in the game and a name to remember for Michigan.

This video is from last week but Michigan point guard target Sedrick Barefield (No. 2) has serious game and played well in Dallas as well.. The move at the end of this video is something else.

Bareifled kept up the impressive play this weekend.

Sedrick Barefield is picking it up today after a slow start to the weekend. His pullup jumpers look sharp. Good isos.

2015 point guard Hyron Edwards will play so fast that he runs into trouble trying to finish, but he never seems to go to fast to find the open teammate.

AJ Turner and 2016 phenom Josh Jackson both impressed in Pittsburgh with Dorian’s Pride.

The duo of AJ Turner and Josh Jackson isn’t your typical once, but on the AAU scene having a top-tier freshman and a soon-to-be stud junior playing together is nothing new. This move has brought out dozens of high-major schools, including Michigan, Ohio State, Syracuse, Georgetown, Florida, Iowa State and others to their games.

Turner, a 2014 guard from De La Salle (MI), continues to improve his game. With a majority of mid-major offers, his goal is to get to the next level and play at the highest level. As local powerhouses Michigan and Michigan State have hosted him on campus for visits, neither has presented a scholarship his way. If he elevates his game this spring and summer, the high-major offers are bound to be extended.

For Jackson, the talented 2016 small forward from Detroit Consortium (MI) is being carted by Georgetown, Ohio State, Michigan and Michigan State early on. A true playmaker, Jackson does a great job of making impressive moves to score and help others score from the perimeter and in the post. After catching everyone’s eye at Team USA’s U16 trials in the fall, the sky is the limit for this young talent.

The Illinois Wolves program was in Iowa to open the live evaluation period and the 16U program advanced to the Capital Classic Live semifinals. That program features 2015 Michigan targets Jordan Ash, Prentiss Nixon and Glynn Watson.

Ash had 16 points in the semifinal loss while Nixon added 12 and Watson tallied 10 points and six assists. Ash also had games of 21 and 19 points and was was impressive throughout the weekend. Here’s a highlight tape of the athletic guard in action.

Michigan continues to explore options to add to its roster for next season as well. One of those options might be Indiana point guard Andrew Dakich. Dakich is the son of ESPN announcer Dan Dakich and is a lightly recruited point guard that played his AAU basketball with Michigan commitment Mark Donnal.

Dakich tweeted last week that he was planning to visit Michigan, “Just spoke with coach Beilein of Michigan. Can’t wait to visit!!”

Dakich would be a preferred walk on at Michigan and has similar offers at Butler and Purdue. His visit is scheduled for April 29th.