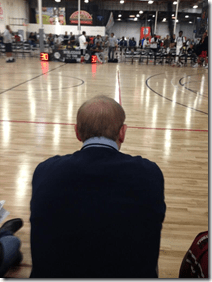 This weekend was the first of two April evaluation periods and one of the nation’s top events was session one of the Nike Elite Youth Basketball League in Los Angeles. John Beilein was in Los Angeles throughout the weekend while LaVall Jordan also did some recruiting at the EYBL. Michigan’s three outstanding offers in the class of 2014 – Devin Booker, Trevon Bluiett and Vince Edwards – were all in action as well as a number of other notable targets.

Michigan had a heavy presence in Los Angeles as John Beilein was on hand for most of the event. Reports popped up on Twitter all weekend of Michigan’s head man watching games – no surprise considering the only three prospects that Michigan has offered were playing in LA.

Early on in the weekend, Beilein was back watching Chicago prospects in a battle of Meanstreets against Boo Williams along with “Groce, Izzo, Smart, Amaker, Craig Robinson, numerous others”.

Scout.com hit on two west coast wings ($) that Michigan is eyeing, Kameron Chatman and Zylan Cheatham. Cheatham is more in the evaluation stage but the Wolverines are recruiting Chatman heavily per this Rivals.com update.

“Oregon, Arizona, Louisville, Michigan, Washington, UConn and UCLA,” he said. “I felt that they were the best fits for me.”

Of those schools, Chatman said, Michigan, Washington and Oregon are coming after him the hardest

Chatman was excellent Friday, scoring 18 points on 8-of-16 shooting while also pulling down 15 rebounds. Similar to my observation of Cliff Alexander, Chatman has improved in the past 12 months by becoming a much more aggressive, physical player. Chatman, the No. 9 overall player in the state of California by 247Sports, has a 247Composite rating of .9792, which equates to four stars. Chatman, considered by most to be a heavy Oregon lean (he’s from Portland), will likely see more schools like Arizona, UCLA and Memphis, which have each already offered, try and make a bigger push following the April evaluation period if he can sustain his level of play.

We get to watch a lot of really bad basketball and find hidden gyms in the midst of it all. #evaluationthoughts

The whispers are a little bit louder on the circuit these days. "Hey, Michigan is here man". #wearestillbuildingsofeelfreetocall

Four-star SF Vince Edwards said his top two right now are Purdue and Michigan. Said they're the ones showing him the most love.

I would not want to fight Stanley Johnson. Or play horse against Devin Booker. #eybl

Up Next: Session Two of the Nike EYBL takes place April 26th through 28th in Hampton, VA.