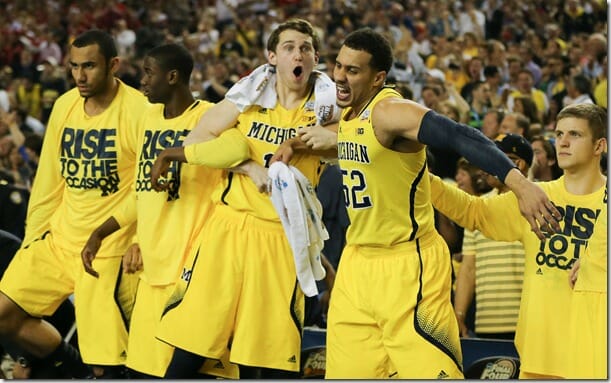 Michigan loses its top two scorers from a year ago but returns the rest of its rotation and adds three talented freshmen to the bunch. Michigan’s group of 11 is plenty talented but extremely young and the question that everyone wants answered is how the pieces will fit together in 2013-14.

The talk at Glenn Robinson III and Mitch McGary’s press conference was all about sliding down a position – to the three for Robinson and four for McGary – but that’s also a convenient aspirational talking point for the offseason. There’s little doubt that the coaches want both players to develop the offensive and defensive skills of the next positions but how often will they actually play those spots?

To frame the argument I sorted the roster roughly by position from the purest of point guards to the most absolute center. At times it’s hard to distinguish but the exercise can start to help piece together a preliminary rotation.

Albrecht and Walton as pure point guards should surprise no one. If both players live up to expectations, it seems feasible that they can handle the bulk of, if not all of, the minutes at the point guard position.

LeVert played the two and the three as a freshman but seemed to spend more of his minutes at the two. He has a long frame but is still slender and we slotted him next on the curve for defensive reasons, he’s the next best equipped to defend smaller and quicker combo guards. Of all Michigan’s returning players, LeVert is the one who could make the biggest jump this season as he adds weight which could make him a viable option at the vacated starting guard spot.

Zak Irvin is 6-foot-7 but has guard skills. On a team loaded with 6-foot-6 wings, Irvin played point guard for long stretches last summer for the Eric Gordon All-Stars. He’s long but skinny and seems like a natural fit at either the three (with his scoring) or the two (with his versatility). Beilein was quoted as saying that Irvin can play anything from the one through the four but the one and four seem unlikely. He’s my odds on favorite to replace Hardaway in the starting lineup.

Nik Stauskas played the three as freshman but should strive to be able to play both the two and the three as a sophomore with Tim Hardaway Jr.’s departure. He probably has the ball skills to play the two but that could also take him away from his favorite shot on the floor: the corner three.

Robinson wants to play the three and he made that clear last week. It’s his position at the next level without a doubt but he has to prove that he has that ability. Right now, that’s just not something he’s shown. Robinson ran just seven ball screens all last season according to Synergy Sports. Trey Burke ran 487, Tim Hardaway Jr. ran 126, Nik Stauskas ran 90, Spike Albrecht ran 33, Caris LeVert ran 18, even Eso Akunne ran 9. Robinson ran just 23 isolation sets… you get the point. Despite playing more minutes than any returning Michigan starter, almost all of Robinson’s offense was derived from other players. Playing the four isn’t going to necessarily prevent him from being more aggressive in creating his own offense but until he does it, it will be hard to replace him with another big man in the starting lineup.

Mark Donnal, Mitch McGary, Max Bielfeldt and Jordan Morgan all have at least one skill – Donnal can shoot the three, McGary has ridiculous ball skills, Bielfeldt is undersized, and Morgan has proven most capable of defending opposing fours – that could be useful at the four position. But three of those four were on the roster last year and rarely had a chance to play the four as Robinson clocked 35 minutes per game in Big Ten games.

I’ve seen a lot of people mentioning Donnal as a redshirt candidate but I don’t see it. He provides a stretch four, pick and pop option that Michigan doesn’t have on the roster. He needs to get stronger and improve on the glass but he could make an impact in limited minutes with his offensive repertoire alone.

McGary is dynamic, aggressive, a great rebounder and surprisingly adept at moving his feet on the perimeter. He’s going to play big minutes and he proved that he is a game changer in the NCAA tournament. Whether it’s Glenn Robinson III or Jordan Morgan at the four next to him in the front court, Mitch McGary is going to be significantly more involved in the offense next season.

Bielfeldt is the only returning player that didn’t play meaningful minutes down the stretch last season. He has the size of a four and the game of a five and it’s tough to see where he fits when there are more talented, experienced or versatile pieces around him at the four/five positions.

Morgan went through a frustrating stretch to close the season but he’s still a dependable defensive player that has experience at both the four and the five. He couldn’t make a layup to save his life in March but he could still be a team captain in November. If Mitch McGary is healthy and playing 30+ minutes per game, there’s not a lot of opportunity for others but Morgan will still be there as a dependable option.

Horford is a five through and through. He’s big, his offensive game is fairly refined within 10 feet and he’s a better defender at the hoop than on the perimeter. Horford would play the five next to Mitch McGary or Jordan Morgan which would require those two to prove they can adequately defend opposing combo forwards and four men; a result that remains to be determined after last season.

John Beilein’s job is to get the best players on the floor in the best spots to help the team win. While NBA development is a great talking point in April, it doesn’t (and shouldn’t) factor into Beilein’s coaching during the season. Robinson and McGary would have the opportunities to demonstrate improved skillsets even if they played the entire season at the four and five respectively. At the end of the day, Beilein is going to start the best five players.

If you slide everyone down, you run into a log jam. Gun to my head, the five most talented players on the roster are Derrick Walton, Zak Irvin, Nik Stauskas, Glenn Robinson III and Mitch McGary. That group of five just happens to correlate perfectly with the sort of lineup John Beilein has preferred in Ann Arbor.

Could Caris LeVert or Spike Albrecht sneak ahead of Zak Irvin or Derrick Walton? Sure, but is replacing one of Michigan’s guards – presumably Stauskas, Irvin or LeVert – with a Jordan Morgan or Jon Horford going to result in a better lineup?

Playing a bigger lineup will become an increasingly viable possibility against larger foes with a growing arsenal of low post options but I would be surprised to see Michigan go predominantly with a two post look.