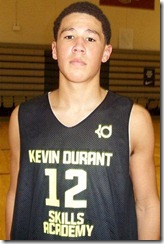 Michigan coaches were traveling the AAU circuit over the weekend and they are back on the road this week visiting prospects and watching workouts. John Beilein or an assistant have already visited California, Ohio, Michigan, Indiana, Alabama and seemingly every where in between over the last couple days. Wednesday was the last day that college coaches could go in-home or meet with recruits off campus until September.

Of course, Michigan isn’t the only school that has been on the road recruiting. Devin Booker, Michigan’s top target in the class of 2014, was offered a scholarship by Kentucky head coach John Calipari on Wednesday evening at his school. Booker now holds offers from Michigan, Missouri, Duke, North Carolina, Alabama, Florida and others.  Some good news for the Wolverines, Duke added a shooting guard commitment from Grayson Allen in the class of 2014.

Michigan made the trip to California to check out 2014 forward Kameron Chatman. Chatman is one prospect that Michigan has been tracking steadily on the AAU circuit and a promising lengthy combo forward.

The Wolverines stopped by Long Beach Poly and spent two hours with Chatman and his prep coach Sharrief Metoyer.

John Beilein spent his final day of in person contact in Ohio checking in on a number of prospects. Beilein was in the school of 2015 big man Nate Fowler in the morning. Here’s footage of Fowler in action from a recent AAU tournament.

Beilein also checked in on 2014 offer Vince Edwards later on (per Mike Dyer). For Edwards, not much has changed. It’s still a Purdue-Michigan battle at the top. A free Rivals update on Edwards explains the impact both schools have made. Edwards explains what it meant for Beilein to watch his game when he wasn’t even playing due to a hip injury.

The 6-foot-6, 200-pound Ohio forward didn’t even try to couch it in an interview afterward. Edwards said his top two right now are Purdue and Michigan, and whichever school shows him the most love this summer is probably going to land him.

“I can’t say enough about if the head coach is sitting here watching you,” Edwards said. “It means they obviously want you.”

Purdue, no doubt, caught a few of his games this past weekend as well. And Edwards certainly noticed. Which is why he’s in the middle of a Michigan-Purdue tug-of-war that is constantly on his mind.

Beilein checks in on Bluiett

Beilein stopped by Indianapolis on Tuesday afternoon to check on one more 2014 offer, Trevon Bluiett. Beilein watched Bluiett workout at Park Tudor along with Matt Painter and Oliver Purnell.