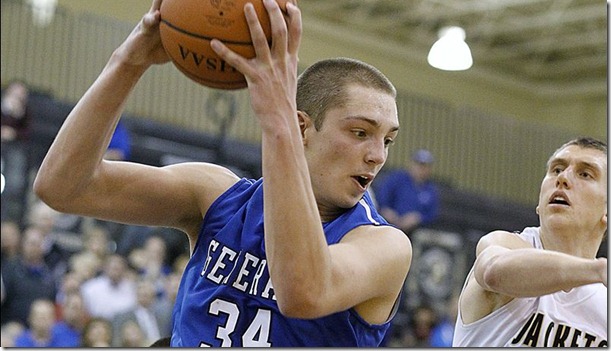 Mark Donnal committed to Michigan almost two years ago on June 15th, 2011. Donnal and Austin Hatch both verballed to John Beilein when they were extended offers on that first day in 2013 and Donnal has seen his career flourish since then. Watch his senior highlights, his AAU highlights, and read the scouting reports but here’s an in-depth question and answer session with Michigan’s incoming big man focused on everything from Donnal’s trip to the Final Four to his favorite video games and movies.

What was it like going to the Final Four in Atlanta to watch Michigan?

“It was just a crazy atmosphere in Atlanta. I went down with my parents, and I just couldn’t believe how crazy everything was down there, all the activities that were going on. Being at the game, playing at the Georgia Dome, there were so many people there. I can’t even imagine — it was just so much fun watching the game, I can’t even imagine being a part of something like that, next year, to play in a Final Four like that.”

Was it surreal to see Michigan in the national title game, knowing that you’ll be playing for the Wolverines next year?

“Yeah, exactly. When coach Beilein was recruiting me, he said, “You come to Michigan and you’ll have a chance to play for a national championship.” He’s obviously showed that this past year, getting to the Final Four. He’s proved that his vision, we can definitely accomplish that goal and win a national championship at the University of Michigan. I’m just very humbled that I’m going to be able to be a part of this program, be a part of a great coaching staff and a great team. I’m just ready to get it all started.”

Are you looking forward to learning from Mitch McGary?

Can you talk about the success you had with Anthony Wayne this high school season?

What did it mean to you to go out like that?

“It means a lot. My high school, my first season we were 1-20. Our coach came in my junior year and he definitely got the program turned around. My senior class was one of the classes I’m hoping will bring Anthony Wayne basketball up to where it needs to be, hopefully winning championships like that every year.”

Where did you see the most improvement in your game throughout the season?

“I would say probably during the tournament, I did not want to go home, so I stepped my game up big time and I did whatever the team needed me to do. Whether it was, you know, getting baskets or playing defense, one of the games, I think I was one block short of a triple-double. That’s what my team needed that game — the defensive presence. So I brought that. I thought that’s where I showed the most improvement during the season.”

Over spring break you traveled with a team from Ohio to Italy and played there. How did that go?

“This was my third time going, I’ve gone three years in a row. It was a great experience. We finally won the tournament this year, and I got tournament MVP, so it was a great experience going up against some of the best competition in Italy there. Just overall, it was a really fun experience playing with those guys. It’s a lot different there. There are some rule changes, like the traveling calls they have there. There’s some different moves that the European big men use. It’s a little bit of an adjustment getting down there and getting accustomed to how they play. It was cool seeing how good the competition is over there.”

What have you seen from Mitch McGary’s development that excites you as a big man?

“One of the games I saw when we were there for the Final Four was against Syracuse, when they put Mitch up in the high post. They had him shooting those mid-range jumpers, and that’s one of the things that coach Beilein said that I would be doing. It was just great to see Mitch playing that role and hitting those shots out there in a game like that.”

What do the coaches have you working on this summer?

What has Andrew Dakich told you about potentially walking on at Michigan?

“He’s visiting on this Monday, that’s when he’s taking his official visit. I know he’s really excited about it. I know he’s got a few walk-on offers. I guess we’ll see in the next couple weeks whether or not he’s going to make his choice and come to Michigan or not.”

What are you most looking forward to when you get to Michigan?

“Just to be a part of the program. I’m just excited to get everything going. Playing in front of a big crowd at Crisler, it’s just going to be awesome.

When you were being recruited, could you envision entering the program the year after Michigan played for a national title?

Is there any NBA player out there that you try to emulate in your game?

Who’s your favorite player to watch?

“Favorite player to watch would be LeBron. But I wouldn’t say I try to emulate him in my game (laughs).”

“Favorite movie would have to be Anchorman.”

Who’s on your playlist right now?

“Right now I listen to Jay-Z a little bit, Lil Wayne, Wale, those are usually the ones.”

Do you have any weird pre-game rituals you do before games?

“Usually I have my routine, and if I have a good game, I have to do the same thing I did the game before.”

But a bad game would cut off that routine?

Anything you like to eat for a pre-game meal?

“Usually before home games, I go to Subway. It’s near the school, so it’s usually a good pre-game meal for me.”

If you’re not playing basketball, what are you probably doing?

“Probably playing ping-pong or playing XBox, hanging out with friends.”

What games do you play?

What is your preferred team in 2k13?

“I usually play with the Thunder. I love playing with Kevin Durant in that game. Or the Knicks. I like Carmelo, too.”

“My high school coach would just say go out and play your game. Don’t really think about what everybody else is doing. Just go out and do you, basically.”