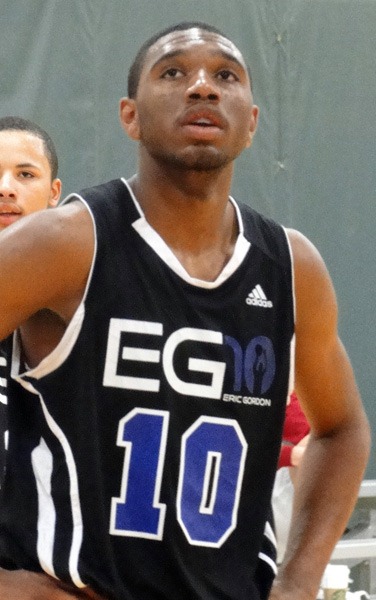 INDIANAPOLIS — 2016 guard Eron Gordon is one of Michigan’s top recruiting targets in the class of 2016. Gordon’s talent was on full display as he opened the Adidas Spring Classic with an impressive showing. Playing two years up, Gordon led his Eric Gordon All-Stars team to a 71-point win with 25 points on 10-of-13 shooting.

John Beilein was in the stands watching Gordon on Saturday morning and UM Hoops caught up with the talented 2016 prospect to discuss his recruitment on Friday night.

First of all can you talk about your overall thoughts on your performance tonight?
“I felt like I was very efficient today. I felt like I defended pretty well. I didn’t feel like my three-point shot was on, but I didn’t take very many today. But I feel like I was just efficient.”

What schools are recruiting you right now, and who’s shown the most interest?
“Well my dad mainly talks to the coaches. But I know for sure Baylor is going to start looking at me more. Indiana and Purdue have. Michigan has been. Nebraska, Arizona State, Ohio State, Louisville, Xavier and Cincinnati a little bit.”

What scholarship offers do you have, and have you received any new offers recently?
Right now, no offers since the season. Right now, Indiana, Purdue, Nebraska and Arizona State.”

Purdue and Indiana both offered you when you were in eighth grade. Can you talk about your interest level in both of those schools?
“What I like about Indiana and Purdue is, I know a lot of people that go there. So it’s pretty nice being able to talk to them about their experience, just guys that I played with every day, they play there, so it’s nice to talk to them.”

Did you pay a lot of attention to Michigan during the NCAA tournament? What did you think about their tournament run?
“I watched them every single game. I felt like they did a really good job, especially with their bench players to come in and play a big role. One thing I noticed with Michigan is that everybody, from the 12th and 13th players come in and they play a big role on the team. They play basically every single player on the team, and that’s really neat, knowing that you have your entire roster that you can put in, and go out there and perform well.”

How do you think you’d fit in with John Beilein’s system if you went to Michigan?
“I feel like I’d fit in pretty good. I feel like I play sort of like a taller Trey Burke. I feel like our shots and movements are a little the same. So I see myself not like him, but having similarities.”

Have you made any recent college visits or have any planned?
“No.”

How often do you get to play against your brother, Eric? How does having a brother in the NBA help you develop your game?
“I was playing with him yesterday. I was playing one-on-one with him yesterday. (I don’t do) very well against him. He beats me 10-0 most games, maybe 10-1. The NBA is a much different atmosphere with strength and speed, mainly strength. Just being able to get your shot off is a lot different, and a lot more one-on-one game. So it’s hard to play against a player like that.”

How influential is your brother in your college decision?
“Honestly, not that much. He sort of had his turn. He gives me advice, but really as an influence, he really just tells me, ‘just go out there and just play, and then (figure out) the school you feel like is best for you, before you have to make that decision, before you commit.’”

How tall are you and how much do you weigh these days? Have you grown at all or put on any weight recently?
“Oh yeah. I just got bigger the other day. I’m 6-foot-3 with shoes on, and I’m 6-foot-1 ½ without shoes. I weigh 173 pounds right now. I’ve been putting on more weight. I haven’t really been lifting weights yet, so it’s probably going to go up a lot when I start lifting weights.”

Have you gotten sick of all the attention yet? What’s the recruiting process been like for you so far?
“No, not at all. It’s been different, you know getting offers in eighth grade. But I feel like it teaches me to be humble because a lot of other players are getting offers and looks. It just shows me the chip on my shoulder that I have.”

What’s your timetable for making a college commitment?
“My parents just want me to learn more about college to see what I like, and then from there, we can decide. My parents didn’t think committing in eighth grade was right, because I didn’t know what high school I was going to at that time, so it was sort of hard to worry about college.”

What’s the No. 1 thing you want to improve on during this AAU season?
“Learning how to play more positions because I don’t know how tall I’m going to be. Learn how to play more point, play a little bit more inside. Just be more than a scorer and a defender.”