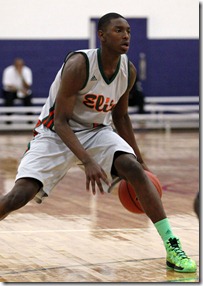 John Beilein spent last weekend in Los Angeles for the Nike EYBL but he stuck to the Midwest for the first two days of the second April evaluation weekend. Michigan’s head coach was the featured speaker at the IBCA Coaches Clinic in Indiana on Friday evening and stuck around Saturday morning for action at the Adidas Spring Classic before traveling to Akron for the King James Classic. After spending two days in the Midwest, the head coach is off to Virginia for the Nike EYBL event watching Devin Booker and other prospects with Michigan offers.

UM Hoops was in attendance in both Indianapolis and Akron and watched the Michigan head coach check in on Hyron Edwards, Jalen Coleman, Eron Gordon, Luke Kennard, Evan Boudreaux and Nate Fowler.

Gordon and his team followed up their 71-point victory on Friday night with a relatively easy 22-point win on Saturday morning in front of Beilein. Gordon scored a game-high 17 points and added six rebounds to lead his team to a 2-0 record.

On a loaded Indiana Elite squad, Edwards, Coleman and White dominated the competition in pool play, winning their two games by an average of 26.5 points, including a morning victory in front of Beilein. Coleman averaged 12.5 points per game, Edwards averaged 8.5 points, and White averaged nine in limited action during their team’s blowout victories.

Coleman, arguably the top prospect in the state of Indiana, holds offers from Indiana, Purdue, Notre Dame, Providence, Ohio State, Illinois and Cincinnati but knows more should be on the way.

“Actually I’m supposed to be going to Michigan and Michigan State and getting something done down there,” Coleman said. “As far as getting an offer past June 15.”

Boudreaux impresses in front of Beilein

Michigan assistant coach LaVall Jordan was in to watch Evan Boudreaux workout last week at his school and stuck around for an hour afterward to meet with his coach. Boudreaux was named MVP at the NY2LA Swish n’ Dish last weekend and is clearly making an impact on the spring circuit despite playing out of position and a grade level up at the 17U level for Team NLP.

Team NLP entered the King James Classic with only seven players but will play for the 17U Championship on Sunday morning and Boudreaux is a big reason why. John Beilein got a first-hand look at the rising prospect on Saturday afternoon. Butler head coach Brad Stevens was also front and center for both of Boudreaux’s games on Saturday.

Boudreaux is an intriguing prospect because his game that features a bit of everything: inside scoring, perimeter shooting, rebounding and physical play.

Thad Matta and Roy Williams were in Akron on Friday night to watch Luke Kennard, VJ King, Nate Fowler and AJ Harris but their opponents didn’t show up. Matta and Williams were left to watch an hour of layup lines, stretching and dunks before calling it quits.

John Beilein arrived just before halftime of King James’ first loss and stuck around for their second game against the REACH Legends. While the final score was closer, the result was the same and King James was knocked out of its own tournament.

Trevon Bluiett averaged just shy of 24 points per game through his first three performances at the Nike EYBL in Hampton, Virginia this weekend including 27 and 29 point outings in his first two games.

Michigan had assistant coaches on hand both in Virginia – watching Devin Booker, Trevon Bluiett, Vince Edwards, Kameron Chatman and others – for the EYBL and in Atlanta where they watched Dorian’s Pride against Dream Vision; a matchup that featured AJ Turner, Josh Jackson, Stephen Zimmerman and Derryck Thornton Jr. Dorian’s Pride got the best of that matchup, upsetting the nationally ranked Dream Vision squad.

Dylan Burkhardt (in Akron) and Josh Berenter (in Indianapolis) contributed to this report.