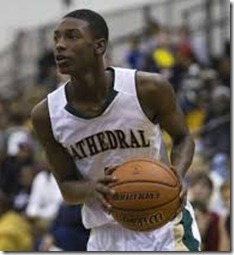 INDIANAPOLIS — Jalen Coleman led Indiana Elite 2015 at the Adidas Spring Classic over the weekend in Indianapolis. His switch from the Spiece Indy Heat to Indiana Elite has been relatively painless as he’s meshed with Hyron Edwards and Chandler White while playing both the point guard and off the ball in a loaded backcourt.

Coleman said his size and strength make him a unique player, and give him an advantage over smaller guards that try to cover him.

“One of my strengths is just being a playmaker, using my length and size at the one, and just bringing it up, using my size and making plays for others, he said. “I’m able to shoot, pull up, and get to the rack.”

With that being said, Coleman mentioned he knows there are still several things he needs to work on to be able to excel at the next level.

“One of my weaknesses is taking care of the little things, like keeping my arms up when I drive and using my body a lot more.”

While Coleman still has a lot of things to work on, that hasn’t stopped several of the best programs in the country to take interest in him. Michigan, Michigan State, Indiana, Purdue, Notre Dame, Duke, NC State, Illinois, Ohio State and Providence are all on the 2015 guard’s list.

Coleman is planning on making trips to both Michigan and Michigan State soon, with hopes of an offer waiting for him when he arrives. He said he knows he won’t get an offer from either Michigan school until at least June 15, as is the policy for John Beilein, but said he already has offers from several high major schools.

“I’m supposed to be going to Michigan and Michigan State and getting something done down there, as far as getting an offer past June 15,” he said. “But (the offers I have are) Indiana, Purdue, Notre Dame, Providence, Ohio State, Illinois and Cincinnati.”

Michigan assistant coach LaVall Jordan has taken the reigns as Coleman’s main recruiter and has seen Coleman grow over the last year. Coleman said he’s happy that Jordan is aware of his unique athletic ability and he hopes to use all of his attributes to his maximum advantage.

“Coach Jordan. Because some of my coaches know him really well, so I talk to him a lot more,” Coleman said when asked who he has the strongest relationship with at Michigan. “He just wants to see me be a combo guard and a playmaker. Just use my length like I said, and just be a playmaker.”

Coleman, who now stands at 6-foot-3 and weighs 170 pounds, is an athletic slasher who can score from everywhere on the floor. He said he loved watching Michigan make its run in the NCAA tournament and said he’d fit right in with Beilein’s system.

“I enjoyed watching them a lot. It showed me as a program how they handle things, and also from a player standpoint, I learned a lot,” Coleman said. “I like the style they play, and the way (Beilein) trusts his players. As far as like Trey Burke scoring and being a playmaker, and him trusting Trey Burke with that responsibility to lead the team, I like that a lot.”

Coleman is aware that he’s a hot commodity in the class of 2015, and that if he continues to work hard, he’ll have a long list of schools to choose from, but he remains hungry, and eager to get better in every aspect of the game.

“Getting stronger, which I’ve been doing right now,” he said when asked what’s the biggest thing he’s looking to improve this summer. “I’ve picked up some weight, and I’ll continue to pick up some weight as the AAU season goes on.”