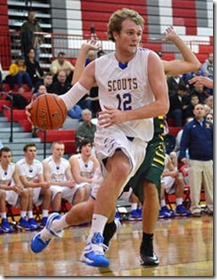 AKRON — Several Michigan targets were in action at the King James Shooting Stars Classic over the weekend in Akron and Michigan head coach John Beilein was in Barberton, Ohio on Saturday afternoon to take in the action. Here are our scouting notes from Friday and Saturday at the event.

Boudreaux is an intriguing prospect because he blends so many skillsets into one. He’s a combo forward but he has to play the five for his AAU team. While the five is most certainly not Boudreaux’s position at the next level, it’s unclear where he’ll land. He has the skills – he can step out and hit a three, he can play with his back to the basket and he’s aggressive on the glass – but he’s not a perfect fit for any spot. While his versatility is a strength, it’s also a question mark at this phase. Will he grow enough to be a real threat on the interior? Does he handle it well enough to play on the perimeter full time? Can he stay in front of wings at the next level? The good news is that Boudreaux has two years to develop and his current skill set is exciting, especially for an offense that requires such a versatile player at the four position. He scored in a multitude of ways over the weekend in Akron including off the bounce, with his back to the basket, using the glass from the block, and from beyond the three point line. He’s not afraid to play physically but he’s not quite explosive enough to be a consistent game changer down low defensively, although he did accumulate a handful of blocks on the weekend.

Kennard’s King James team faced two teams with enough size and athleticism to bother them on the wings. Kennard was still effective in spurts but never got fully heated up. Much has been made about the low release point on Kennard’s shot and that could be a concern eventually but right now his size and quick release allow him to shoot easily and consistently. When he’s on, I’ve see Kennard influence almost every aspect of a game, but Saturday at King James was a reminder that when the jump shot isn’t falling sometimes the other elements can lag behind as well. From top to bottom, King James struggled all day on Saturday, but Kennard did still have some high notes including knocking down a couple of threes in a comeback effort against the REACH Legends. (Related: Watch video of Kennard at last weekend’s NJ Playaz Spring Fling)

Fowler has a great frame and seems to move more comfortably than he did a year ago at this time. He plays with so much talent on the wings and in the backcourt that it can be hard for him to find scoring opportunities.  When he gets the ball he’s usually decisive in making a quick move and getting the ball up to the rim. He’s lacking some explosion athletically but that can develop as he continues to grow into his body. Fowler also shows a nice shooting stroke from the free throw line and in warmups and it would be nice to see him attempt a few mid-range jumpers over the course of a game.

King is a class of 2016 prospect that’s projected in the top 15 by most. At 6-foot-6 he can play just about any position and gets to wherever we wants on the floor almost effortlessly. With AJ Harris on the bench, King was able to initiate the offense from the point guard spot, but he also was plenty comfortable slashing to the basket despite playing two years up. He can shoot jumpers or get all the way to the rim, and gets his mid-range jump shot off with ease. Perhaps what’s most impressive is how easy he makes the game look, there’s little forced motion in his game

Harris is a jet quick point guard with an incredible handle but at times his greatest strength is his greatest weakness. Harris needs to let the game slow down and his decision making will improve. He leads a team with boat loads of talent on the wings and size on the block but sometimes doesn’t get them as involved in the offense as he could. And when he does distribute the ball he still has the tendency to opt for the fancy pass rather than the easier correct pass. Harris has great raw ability and the vision and potential is there but this wasn’t his best weekend.

Davis has improved significantly since last summer and continues to grow. He’s productive from the backcourt without forcing things. He has the athleticism and length to slash but his ability to make the right play consistently is what stands out. He’s still rail thin and needs to add strength and improve with his 3-point shooting consistency but he was the best player on the floor for long stretches in REACH’s win over the King James Shooting Stars on Saturday.

Tillman is another REACH Legends player that remains on the radar. Tillman is a great athlete at 6-foot-7 but is stuck in that tweener phase where he needs to grow (height and lower body muscle) into a true post or start to develop a perimeter game. Right now he’s a shot blocking, rebounding presence with a solid back to the basket game.