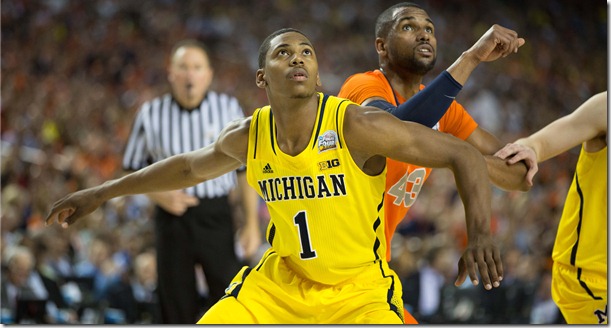 A year ago we spent large portions of the offseason debating whether Michigan – slotted No. 5 in most preseason publications – was overrated entering the season.

The Wolverines were good the year before and snuck into a share of the Big Ten Championship but could they really be national contenders? Opinions varied across the board, including Dan Hanner’s drastic take that the Wolverines weren’t a top 25 team. In the end, Michigan’s preseason ranking was pretty much dead on. The Wolverines were ranked in the top five for the majority of the season, climbed all the way to No. 1 at one point and despite a late season tumble made a run to the National Championship game.

With the NBA Early Entry Deadline in the rearview mirror, preseason top 25 polls are rolling off of the presses once again. With Glenn Robinson III and Mitch McGary back in the fold, pundits are buying the Wolverines once again.

Losing point guard and Wooden Award winner Trey Burke makes the Wolverines look a little less imposing entering the 2013-14 season, and the departure of shooting guard Tim Hardaway Jr. will definitely hurt. But this will still be an incredibly dangerous team more than capable of getting back to the Final Four, thanks to the return of forwards Glenn Robinson III and Mitch McGary. Both players would’ve likely been first-round picks in this summer’s NBA draft had they chosen to leave school early. Rising sophomore Nik Stauskas, a returning starter, is among the country’s top outside shooters. Forwards Jordan Morgan and Jon Horford and guards Caris LeVert and Spike Albrecht all earned valuable minutes during the Wolverines’ run to the NCAA title game and will only improve. Michigan is adding two freshmen — small forward Zak Irvin and point guard Derrick Walton — who should step in and contribute immediately.

ESPN went as far as tabbing Mitch McGary as a preseason All-American:

Mitch McGary, Michigan: Small sample size or sign of more to come? That is the defining question about McGary’s sophomore season to come after McGary turned down likely NBA riches to stay in Ann Arbor. The goals are straightforward: Win a Big Ten title and, in doing so, replicate that immense March performance for a full 35-game stretch.

Anyone who saw McGary this spring can get with his placement here, because he really was a star. In six tournament games, McGary finished with an offensive rating of 125.7, shot 40-of-59 from the field, grabbed 64 rebounds, ripped 12 steals (including five in one game against Florida) and generally dominated the interior pretty much any time he was in the game. And yes, McGary’s minutes went up in March thanks to a Jordan Morgan injury, but it’s easy to forget that as recently as Michigan’s final regular-season game, McGary picked up four fouls in just eight minutes and spent most of the game on the bench. His March didn’t come out of nowhere — McGary was the second-rated prospect in the 2012 class as recently as his final season in high school — but it was a surprise to anyone who watched the Big Ten all season.

The return of Robinson and McGary means that people expect the Wolverines to compete once again. Michigan State is back, Ohio State and Wisconsin return a lot of talent, but Michigan does too.

There are plenty of question marks. Derrick Walton and Zak Irvin being able to contribute immediately. Mitch McGary playing like NCAA tournament Mitch McGary. Glenn Robinson III diversifying his offensive game. What does Michigan basketball look like without Trey Burke? But every team in America has questions on April 30th and, similar to last year, Michigan has a lot of potential answers.