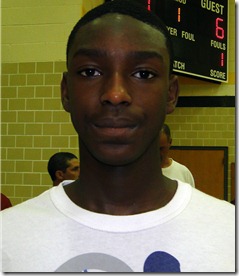 INDIANAPOLIS — Four Michigan targets put their talents on display this weekend during the second April Evaluation period at the Adidas Spring Classic.

Eron Gordon, who plays two years up for the 17U Eric Gordon All Stars-Green, and Hyron Edwards, Jalen Coleman and Chandler White, who play for the 16U Indiana Elite, all showed improved games to John Beilein, who was on hand to watch both teams on Saturday morning. Both teams dominated in pool play but were sent home early, with each squad getting upset in the second round of bracket play.

Jalen Coleman (2015, Indiana Elite, Wing)
On a team that boasts three likely high major guards, Coleman stands out as the best of the bunch. He’s a prototypical high major wing player who would fit in perfectly in Michigan’s offense. He’s an extremely athletic slasher with a quick first step, who can score from all over the floor.

Coleman, who plays off the ball, is able to get by defenders with ease and was able to finish with either hand in traffic. He has an above average handle and an arsenal of mid-range moves. His shot release is quick and high and he rarely gets blocked, showing range beyond the three point line. He was one of only players in Indianapolis who consistently hit mid-range jump shots. Because he can score from anywhere on the court, he sometimes trusts his jump shot too much and settles for contested jumpers instead of taking the ball to the basket.

Coleman’s length bothers opposing players on both ends of the floor, and he frequently gives up his body on defense. He is an aggressive on-ball defender, always staying in front of his man.

Gordon’s understanding of the game is advanced for his age and he’s patient and efficient both on the ball and off the ball. He has an explosive first step that allows him to seamlessly get into the paint and score at the basket. Gordon can easily finish with both hands in traffic and plays well above the rim. He primarily plays off the ball, but he can run the point when he needs to with good ball-handling skills and good body control. Gordon has great court vision and he’s an above average passer, who reads how the defense is playing him and lets the game come to him.

Gordon needs to develop a better mid-range game. His three point shot is progressing and he can finish at the rim but the mid-range pull up jumper will be pivotal in his development over the coming years. Gordon insists his recruitment is wide open and he’s developing a strong relationship with the Michigan staff.

Hyron Edwards (2015, Indiana Elite, Point Guard)
Edwards is one of the top point guard targets on Michigan’s board and a candidate for an offer on June 15th. One of the best attributes of Edwards’ game is his ability to get up and down the floor in transition and make the correct pass, allowing his teammates to get easy baskets.

He’s very quick, very agile, and his ball handling skills are among the best in the country. Edwards is a plus athlete and that allows him to make an impact defensively and on the glass, a welcome sight from a young point guard. Edwards averages several steals per game, and is effective in pushing the tempo off of turnovers.

He’s a pass-first point guard who knows how to efficiently run his offense, but also knows how and when to take a game over with his own scoring when need be. Edwards rarely forces action but has the tendency to try and make a perfect pass, leading to a turnover rather than an easy bucket. He needs to get a lot stronger and develop a little more patience.

Chandler White (2015, Indiana Elite, Combo Guard):
White was one of the best defenders in Indianapolis this weekend. He plays hard on both ends of the floor but is more effective defensively. At 6-foot-2, he’s a great shot blocker, a tremendous rebounder and has a knack for getting in passing lanes. He is a good help-side defender, and often disrupts the opposing team’s offensive rhythm.

White has drawn attention from Michigan, Indiana, Purdue and Boston College (offer) among others and is also explosive on the offensive end in spurts. His quick first step allows him to slash to the bucket and has the ability to finish above the rim and score in traffic. Although he primarily plays off the ball, White has point guard experience and is a very good passer with good vision, and playmaking skills. His ball handling is still a bit rough around the edges and his 3-point shot  is a work in progress as he looks to speed up his release and set his feet more consistently .

White has a high motor on both ends of the floor but he’s something of a “power guard” at this point in his development. He can overpower smaller defenders now but he’ll have the refine his game in the coming years to have the same effectiveness at the high-major level.