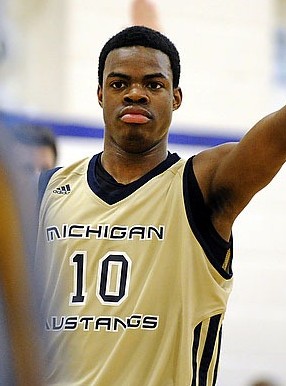 1. Derrick Walton, PG, Michigan
Final ESPN 100 rank: No. 30
Remember, Trey Burke was ranked No. 84 in the Class of 2011 and developed into a Wooden Award winner in his two seasons with Michigan. Walton, who will replace Burke and take the mantle as Michigan’s point guard, has some similar traits to Burke as he is small, tough and competitive. Although we have Walton ranked No. 30, which is relatively high, he still has to fight for everything he earns — which is what makes him special. Walton will lead the Wolverines and will have a wealth of talent around him with a mixture of scorers, size and a strong incoming freshman class coming in with him. Look for him to push the pace with a high-speed dribble and find teammates off penetration with his peripheral vision. Walton is battle tested and has played on the travel team circuit against some of the nation’s best point guards and had his way. Don’t be surprised to see him get more assists than points in any given game, yet he can also make big shots when his team needs them most. He is a clutch performer with the perfect mindset for his position. The opportunity is there for Walton; look for him to capitalize on it.