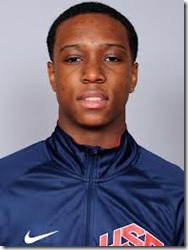 2015 point guard Hyron Edwards is the one of the top 2015 recruits in the state of Indiana and has been on Michigan’s radar for over a year. Edwards keeps in close contact with Michigan coaches and takes it upon himself to keep in touch with the schools that have shown interest in his game.

“Michigan, Michigan State, Indiana, Purdue, Illinois, I’ve heard from Kansas and Oklahoma State,” he said when asked about the biggest schools to recruit him. “I keep in contact with all the schools. Every week I try to call them and see how they’re doing, to make sure I’m still there with them and they’re still there with me. We connect pretty well.”

Edwards has always had raw ability, including lightning quickness and an explosive first step, but he’s improved his all-around game over the last year.

Edwards is the floor general of a loaded team that includes other Michigan targets Jalen Coleman and Chandler White. Coleman is the newest addition to Indiana Elite’s 2015 squad and Edwards said the addition of Coleman has made his job easier and makes him a better player.

“The transition has been good because if the defense is on me heavy, I just get it to Jalen or Chandler White,” he said. “We can all bring the ball up. It’s pretty great having other good guards on my team.”

“I’ve been talking to coach Jordan a lot. He likes my defense, and my overall game. He just tells me to shoot a little more,” Edwards said. “Their run was great. Nobody thought they would get that far, or even get past VCU. They just stuck together and played well.”

Edwards has Michigan high on his list of schools because he loves the system that John Beilein runs, and he has a local connection with several young Michigan players.

“(Beilein) lets the point guard go, and he lets the whole team go, and they just run set plays if needed. So coach Beilein and his style of play is great,” he said. “It’s pretty great they made that run because Glenn Robinson and Mitch (McGary) and Spike (Albrecht) were on that team, and they’re from where I’m from, so it’s great. I was rooting them on.”

Michigan’s foot hold in the region has grown strong with Zack Novak, Glenn Robinson III, Mitch McGary and Spike Albrecht all making the journey to Ann Arbor from Northwest Indiana.

The 5-foot-11 point guard still has a lot of development to do before he can think about the next level, but he said he’s enjoying the recruiting process and will continue to work hard every step of the way.

“The recruiting process has been great. It’s just a blessing that (college coaches) are coming and checking me and my teammates out,” he said. “I’m in the weight room just working with my trainers. I work on ball handling, shooting, defense and everything. Just everything to get me over the hump into college.”

Edwards isn’t rushing things right now. He hasn’t taken many visits of late but is working with his dad to finalize plans for this summer.