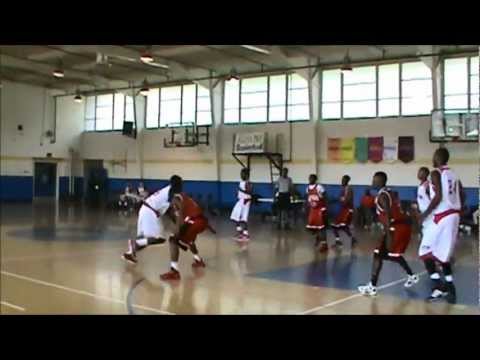 It’s been obvious since the early stages in Dwayne Bacon’s recruitment that the 2015 wing prospect has tons of potential. At 6-foot-6 with a shockingly versatile game, college scouts have been drooling over his ability and Bacon is ranked in the top 25 by both Scout.com and Rivals.com.

This summer, it appears he’s taken his game to the next level.

During a conversation with Bacon on Wednesday, the Lakeland, Florida native said he’s been focused on improving his outside shooting and becoming a more complete player. However, this past weekend at the Gulf Coast Hoop Fest, Bacon displayed his strength: getting to the basket.

Bacon has spoken with Michigan about an offer, but the Wolverines are following head coach John Beilein’s hard-and-fast rule not to dole out an offer until this summer on June 15th, and only after Bacon has visited campus.

“I talked to Michigan today,” Bacon said. “They will offer as soon as I get on campus.”

While a visit date isn’t set in stone, Bacon made it clear that he plans to make the trip to Ann Arbor.

“I don’t have a date set but I am planning on it,” Bacon reported. “Probably around August or September.”

While those months would fall later than Michigan’s offer date, expect the Wolverines to also make a push to get Bacon on campus for their June 1st College Practice Camp as well.

Bacon said his recruitment is in the early stage despite his recruiting profile growing rapidly. Primary recruiting duties have fallen to assistant coach Bacari Alexander.

“He’s a good man. Every time I need something I can call him. We’re just working on that relationship to build a connection.”

Bacon watched Michigan’s NCAA tournament run this past season and he said it “definitely” raised the program’s profile in his eyes.

Two players Bacon noticed the most were Trey Burke and Tim Hardaway Jr. In fact, the talented wing prospect has his sights set on the possibility of bringing his good friend and AAU teammate Corey Sanders to Ann Arbor with him to institute a sort of Hardaway-Burke duo 2.0.

Bacon reported that Bacari Alexander spoke with Sanders on Wednesday as well and while Sanders is not as highly regarded as Bacon, he’s also added offers from Memphis, Marquette, Murray State and Rider.

“If I can go there with Corey (Sanders) — Trey Burke and Tim Hardaway Jr., I think Corey and I can be the next, you know, that duo,” Bacon said.

The two players are very good friends, and many schools are recruiting them as a package — Marquette recently offered both of them.

Overall, Bacon appreciates the fact that Michigan is willing to recruit him all the way down in Florida. He sees himself in fellow Florida native Hardaway’s role, but more of a slasher than shooter.

“I’m from Florida. Michigan’s a long way from where we’re at. Corey and I are really the only ones Michigan is recruiting around here. That’s kind of different for Michigan. And for him to come to Florida to try to get me, that’s a big difference,” Bacon said. “All the offers I’ve gotten, pretty much, another person down here has. Michigan is a different place, and I would much rather be in a different place than where everybody else is at and where anybody else got offers from.”