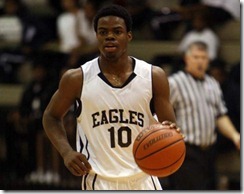 Derrick Walton committed to Michigan on August 1st all the way back in 2011, one day after Michigan picked up a commitment from Walton’s friend from Fishers, Zak Irvin. Since then, the senior from Chandler Park has grown into one of the top point guards in the country and a finalist for Michigan’s Mr. Basketball. We have covered Walton’s rise plenty, but we sat down with Michigan’s latest point guard signee for an in-depth question-and-answer session. Walton talked about traveling to Atlanta for the Final Four, what it will be like succeeding Trey Burke, his affinity for Space Jam, and more.

As the new point guard succeeding probably Michigan’s greatest point guard ever in Trey Burke, what stood out to you when you watched Burke this season?

“Mostly how he didn’t turn the ball over and how he played under control. He really didn’t let the game speed him up, and he didn’t let teams speed him up. He just always stayed within himself and was focused on winning the game.”

What were you able to learn from watching Burke play?

“How to really create separation with your moves and how to vocally lead and push guys to the right spot.”

Is it a little intimidating succeeding a player like Burke? Or do you relish the opportunity?

“A little bit of both, but more so relish it. Because I like the challenge and the spotlight and stuff like that, but sometimes it can get a little too much.

“Spike Albrecht also emerged somewhat as a competitor for the point guard spot. What’ll it be like going up against him in practice?

“I’m looking forward to good friendly competition in practice. At times it’s going to get heated but mostly just making each other better, pretty much.”

What was it like watching Michigan’s run to the Final Four this season?

“It was exciting to see the program take that next big step that no one thought they would be taking. I was just happy to see it, knowing that I’m going to be a part of it, and then the run happened right before my eyes.”

What’s it like as a point guard coming in, knowing the sort of athletes that will be at your disposal?

“It’s like a point guard’s dream, knowing you can just throw it to guys who you know for sure can make plays and do all that. Just knowing that they can make game-changing plays with their athleticism.”

How was your experience in Atlanta during the Final Four for the 3-point Shootout?

“It was fun. It was more of a fun trip than anything, just taking in all the Final Four stuff they have going on. Other than that it was just me and a few of my teammates hanging out and having fun.”

Did you get to hang out with Zak Irvin while you were down there?

“We actually were roommates. We hung out a lot. I’m eager to play with another player who I know is really good and a guy who really loves the game. Playing with him is going to be fun.”

What area did you improve in the most over the course of the high school season?

“Just being more poised in the way I think about the game. The high level play. Just doing everything at a higher level.”

What do the Michigan coaches have you working on this summer to prepare for the next level?

“Just making my body more equipped to take punishment. Just getting bigger and learning the game at a different level and studying film and stuff like that. Doing everything I can to stay on top of my game.”

Given that you’re from the area, do you think your family will be making it out for most of your games at Michigan?

“I’m pretty sure they’re going to make it to every home game that they can.”

Is there any particular NBA player you try to emulate in your game?

“I would say Chris Paul, just facilitating the ball and helping setting guys up. Scoring-wise, when I try to score a lot, it’ll probably be Kyrie Irving, the way he just breaks his defender down and gets to the basket.”

Which musicians are on your playlist right now?

Do you bring any quirky pre-game rituals to Michigan?

“Nah, I just joke a lot, try to get people to not be so serious all the time. Be focused, but have fun with it.”

“I was thinking sports medicine, then I thought sports broadcasting, so I can be a commentator or something like that.”

If you’re not playing basketball, what are you most likely doing?

“If I’m not playing basketball or training, I’m probably chillin with my friends, playing video games, out having fun.”

“I play fighting games like Mortal Kombat. And I’m a big 2k13 player.”

“I usually play with the Spurs or the Clippers.”