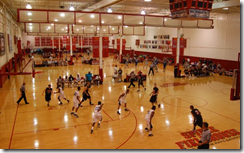 The Bill Hensley Memorial Run ‘N Slam Classic at Spiece Fieldhouse is the premiere AAU event in the Midwest year in and year out. While coaches won’t be on the road this weekend, the top talent in the Midwest will be playing at Spiece and UM Hoops will be in attendance throughout the weekend.

Two of Michigan’s three offered prospects in the class of 2014 will be in attendance – Trevon Bluiett and Vince Edwards – and a number of high priority 2014, 2015 and 2016 targets will also be in action. We also hope to watch top prospects like Kevon Looney, Hyron Edwards, AJ Turner, Jalen Coleman, Eric Davis and many others throughout the weekend.

For reference you can look back at all of our posted recruiting videos (dynamically searchable) or a scholarship breakdown of future classes.

ESPN released its final rankings and continues to show love for Michigan’s incoming group. Just days after naming Derrick Walton the top under the radar prospect in the class, ESPN slots Michigan as the No. 2 “sleeper” class.

2. Michigan (No. 12 class)
The Wolverines have added three ESPN 100 prospects who are not only talented and will excel in John Beilein’s system, but also who address some of the team’s needs after losing Trey Burke and Tim Hardaway Jr. to the NBA. Derrick Walton is an excellent point guard who pushes the pace and can deliver the rock at high speeds or execute when the defense is set. Zak Irvin is a quick fix on the wing because of his size, athleticism and ability to flat-out get buckets with his aggressive approach on the offensive end of the floor. Power forward Mark Donnal is skilled and can finish in the paint or stretch the defense with his range to about 18 feet. This class will excel in Beilein’s system because all three have the IQ and skills to make high-level plays. Expect this Michigan class to be an NCAA tournament mainstay as long as it is together.

The criteria is a bit weak – any teams outside the top ten qualify for selection – but ESPN’s scouts (some of the best in the business) feel strongly about Michigan’s three man group.

No offer for Tillman

Class of 2014 big man Justin Tillman had a solid weekend at the King James Spring Classic in Akron last weekend and we had the chance to watch him fairly extensively. Tillman played well – his athleticism and length jumps off the page first – but is still a prototypical tweener. He’s not big enough (especially in the lower body) to be a true post player and his perimeter skillset isn’t diverse enough to be a true stretch four.

The reports that Tillman had added a Michigan offer that swirled earlier this weekend were false but Michigan did take notice of Tillman’s steady play. The Wolverines hope to have Tillman on campus for an unofficial visit soon and have shown rejuvenated interest in the Detroit native.

The Tillman saga segues nicely into a recent Dave Telep column which hit on the key point of what exactly is an “offer” during the April and July evaluation periods. The answer isn’t so concrete.

Players need to be careful. The person ultimately in charge of their future at any school is the head coach. Wouldn’t you want to hear the words “You have a scholarship offer” from the head coach? I know I would.

I also know that if I were a 17-year-old kid who just talked to an assistant coach, I’d come away thinking I had an offer — and that’s what the coach wants the recruit to think. An assistant’s job with most of the guys on his list is to keep them warm so he can work on the top-tier choice while keeping his options open in case of a miss. There’s nothing wrong with that. It’s part of the recruiting process, and everyone from the coach to the prospect is playing his part.

There’s little confusion in the way John Beilein operates and he sticks to two firm rules.

Beilein’s approach has been criticized by some but now that the Wolverines have ground to stand on – success on the court – it’s a lot easier to execute the no nonsense approach. Beilein can avoid some early misses in talent evaluation and set a reasonable expectation which allows him sufficient time for evaluating. Beilein isn’t losing targets because of it. There’s not a single committed prospect in Rivals’ Top-50 for the Class of 2015 right now and the June 15th offer day is just over a month away.

Evan Boudreaux – 2015 – PF – Team NLP 17s
6-7 – Lake Forest H.S. – Lake Forest, IL
Boudreaux was co-MVP of the Spring Extravaganza while playing up a level with Team NLP. A tough and rugged combo forward, Evan is not afraid to mix it up inside and has improved taking his game outside of the mid-range as he is more comfortable attacking off-the-bounce or shooting face-up perimeter jumpers. It was nice to see Boudreaux still go to work on the glass even though his game pulls him away from the basket a little bit more often now.

Eron Gordon – 2016 – SG – Eric Gordon All-Stars (17s)
6-3 – North Central H.S. – Indianapolis, IN
The lone class of 2016 member on this list, Gordon was extremely impressive playing two grade levels up on the 17U level for the Eric Gordon All-Stars. Gordon can play above the rim with ease, has an advanced scoring feel for a young player and also knows how to play within his team’s offense. Gordon can put up big scoring numbers, but he isn’t out there regularly forcing shots and taking away from his team’s offense.

Kevon Looney – 2014 – PF – Milwaukee Running Rebels 17s
6-8 – Milwaukee Hamilton H.S. – Milwaukee, WI
Looney had his way with the competition in multiple events that we witnessed in April. He’s still an offensive rebounding machine and someone nearly impossible to defend in the high post, but he’s also worked on his handle and his jumper enough to keep defenders guessing. He’s one of the top players in the country and a potential top-10 player when it’s all said and done.

Nick Baumgardner spoke to Kevon Looney’s coach and got some quotes regarding Michigan’s standing in his recruitment.

“He’s looking for a school with good academics and a nice college environment,” Parrish. “He also wants to play on a big stage, and have an opportunity to compete for a national championship.”

“They say they’re very interested, and I know coach LaVall’s been involved quite a bit,” Parrish said. “It’ll probably go until the end of the summer, he wants to cut that list down to five and take some visits early in the fall.

We profiled Dwayne Bacon’s recruitment on Thursday and posted an impressive highlight film from this spring but here are some scouting notes from Future 150, who saw Bacon last weekend.

The 6’6″ shooting guard is solidly developing, and has improved vastly since last year. He has a better handle, can shoot it with more consistency, and his physique is ever more impressive than it was last year. Marquette has already offered a scholarship, so you can see what big time programs think of the Florida native.